A Young Venezuelan Had A Simple Dream To Make Money And Travel. He Was On His Own For The First Time In His Life.

By Madison SavedraDecember 3, 2022December 7th, 2022After the Buses, Trending

After being separated from his family at the border, Delwuins was alone for months in a suburban hotel, with little to do. Without a car or work permit, his options to make money were limited. 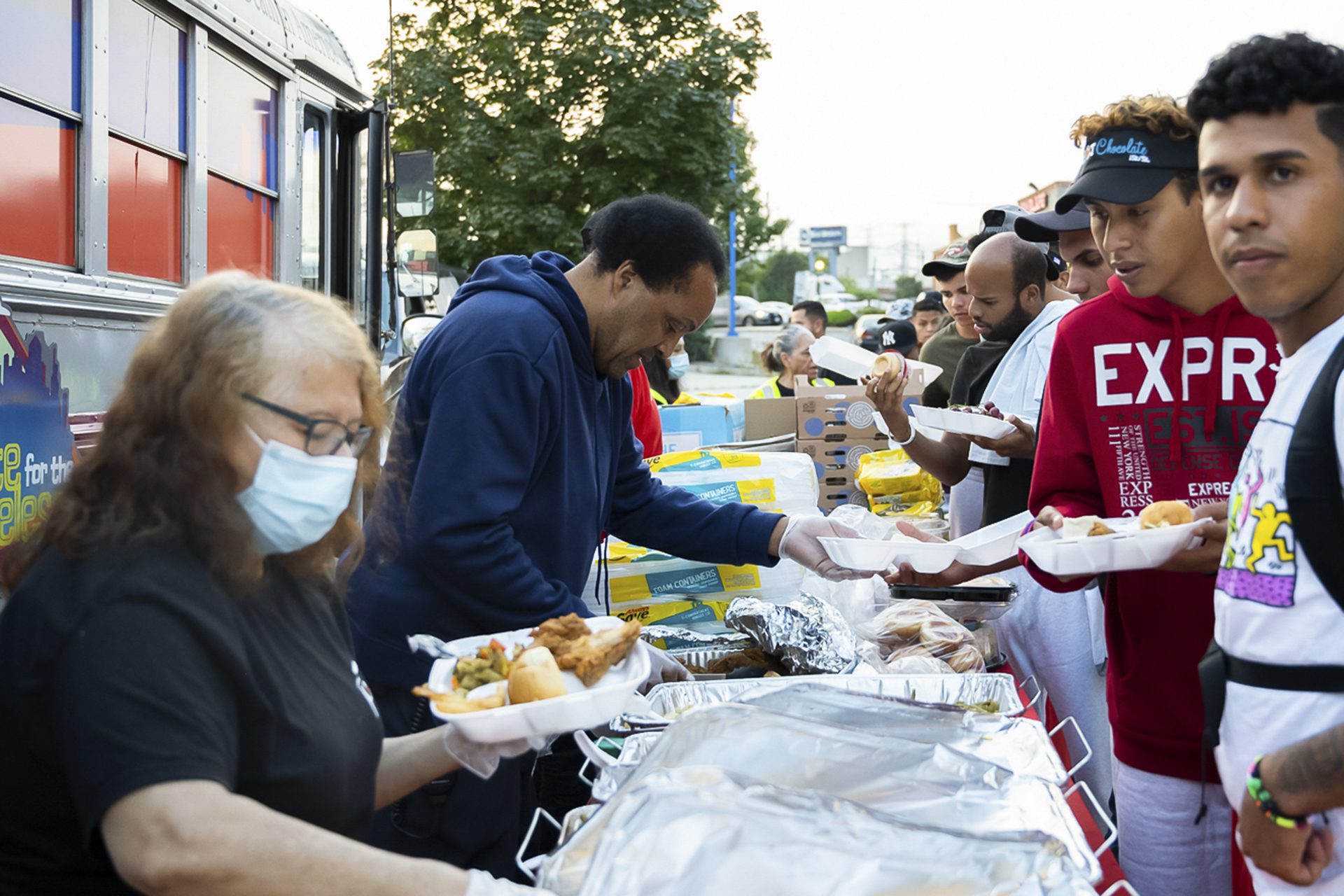 Enrique Reyes/Block Club Chicago
Delwuins, pictured in the red sweatshirt, and other migrants line up to receive food and donated goods at a community dinner near a Chicago suburban hotel where they were staying in September, 2022.
By Madison SavedraDecember 3, 2022December 7th, 2022After the Buses, Trending

After being separated from his family at the border, Delwuins was alone for months in a suburban hotel, with little to do. Without a car or work permit, his options to make money were limited.

ELK GROVE VILLAGE — Carrying a bag of clothes and a plate of food, 21-year-old Delwuins’ hands were full when a nonprofit worker came up and offered him more help: socks.

It was the middle of September, and nonprofits Taste for the Homeless and House of Restoration were hosting a dinner and donation drive for the nearly 100 immigrants staying at a hotel near O’Hare Airport in the suburbs. All of them, including Delwuins, who asked not to use his last name, recently arrived in Chicago from Texas under Gov. Greg Abbott’s push to send asylum seekers to Democrat-led cities.

By that point, Delwuins had only been in the Chicago area a little over a week. He had food and shelter but no phone and no knowledge of the place he’d landed in. He was on his own, separated from his family for the first time in his life.

Delwuins and his family traveled for three months from Venezuela to the Mexico-United States border — then were sent to different shelters after being processed by immigration officials in Texas. His parents and his two younger brothers were sent to New York, while Delwuins was only given the option of taking a free bus to Chicago, he said.

While Delwuins’ family tries their luck in New York, he is doing the same here. Or he could move to Cincinnati, where he has cousins who have been in the country for about a year. Wherever he goes, his plan is to “work, work, work” — “trabajo, trabajo, trabajo.”

“I haven’t gotten to know much of Chicago, but I like what I’ve seen,” he said.

A Dream Of Traveling

“I’ll invite you to my graduation,” he said with a laugh.

As he sipped coffee, Delwuins described the warm, picturesque waters near his hometown of Valencia, Venezuela.

“It’s delicious, crystal-clear,” he said. “There’s lots and lots of fish. You don’t need [goggles] … because it was so clear.”

Delwuins had been staying at the suburban hotel for more than a month. He was grateful for the comfortable place to stay, but he was getting bored of his daily routine of watching TV and hanging out with the other folks staying in the hotel, he said.

Without a car, Delwuins was stuck in the suburbs. Without a legal work permit, his options for work are limited. Delwuins said he hopes he can get a job “under the table.”

Back home, Delwuins used to work at a stall selling trinkets and accessories, he said.

“Things for women, like hair bands and bracelets,” he said.

The difficulties Delwuins and his family faced in Venezuela were enough to make them embark on a three-month trek to the United States. Basic necessities like food, gas and electricity are difficult for a large swath of the population to get their hands on, even for folks who have jobs. 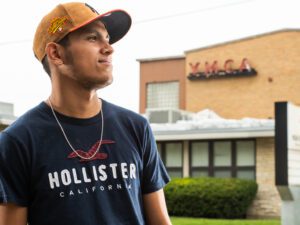 “The situation is critical, it’s ugly in Venezuela,” he said.

As Delwuins and his family traveled through the jungle in Central America, they feared being bitten by dangerous insects and animals, or worse —  being caught by immigration officials or cartels in Mexico, Delwuins said.

The family traveled primarily on foot, sleeping on the road. Delwuins said the mud on certain paths could be brutal, coming all the way up to their knees.

When they finally arrived at the border, Delwuins was sent to a different shelter than the rest of his family because he was older than the kids they were letting into family shelters, he said.

“They separate you because you’re older,” he said. “And there are various places they take immigrants because there’s so many, they don’t fit in just one place.”

People who didn’t have money were encouraged to hop on free buses, Delwuins said. His only option was Chicago, which he didn’t know anything about but figured wasn’t a bad option once he learned it was close to Cincinnati.

Delwuins misses his family, but they’re making the best of the situation, he said.

When Delwuins arrived in Chicago, he was taken to a refugee center, he said. He doesn’t remember where it was, but it was like a church without furniture, he said. After a few days there, he and about 100 other people were taken to a hotel in the suburbs near O’Hare Airport.

”I have a dream — I came here because I want to travel,” Delwuins said. “India, Saudi Arabia, China and all the countries I can.”

After nearly a month of being cooped up inside, Delwuins said he was eager to explore Chicago. He wants to go to the beach and dance in a nightclub. He wants to do the things normal 21-year-olds do.

Once he’s settled and has money saved up, he knows what he’ll spend it on, he said.

“I have a dream — I came here because I want to travel,” Delwuins said. “India, Saudi Arabia, China and all the countries I can.”

Delwuins has done his research, and he knows exactly what he wants to see.

Cartagena, Colombia, is a must-see vacation spot, with its beautiful beaches and historical architecture — including centuries-old walls that were built to protect the city from pirate attacks, Delwuins said. The Salar de Uyuni in Bolivia, the world’s largest salt flat, is completely clear, like a mirror, he’s deciphered from pictures.

In November, Delwuins moved to Cincinnati to join his cousins. Things were working out well, he said, and he’d landed a job cleaning hotel rooms. He wished the pay was better, but the job brought him one step closer to traveling, he said.

“Once I have a lot of money, my first trip is going to be to India,” he said. “I’m going to eat rare but delicious foods, go to a strange nightclub and do everything typical on a vacation. See everything, take photos.

“But with money, of course.”