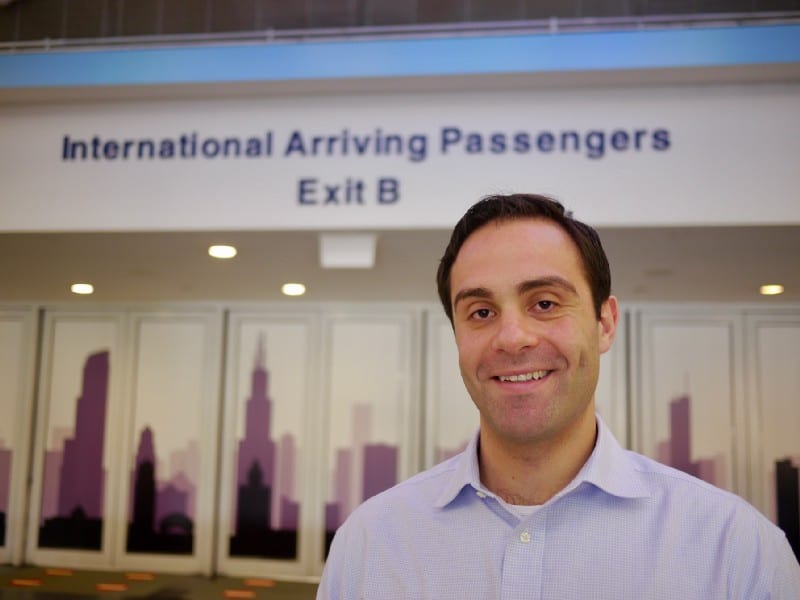 Jamie Friedland answered a call for legal help at O’Hare International Airport January 28, the day after the immigration ban began. An environmental litigation lawyer by day, Friedland is one of 1,400 attorneys and interpreters who have volunteered their time at the airport and who continue to support travelers and their families.

Borderless caught up with Friedland on February 14 during his tenth shift at the ORD Lawyers HQ’s makeshift office in Terminal 5.

I became a lawyer because there were problems I saw in the world that I wanted to fix. If immigration wasn’t initially one of them, this is the kind of thing that lawyers can do that people without a law degree can’t. When my firm sent out an email asking for volunteers at the airport, it seemed like a great opportunity  —  not even an opportunity, but a necessity for people with those skills and training to step up.

My friend and I showed up at midnight that first Saturday for an overnight shift. But it turns out they didn’t need anybody, because the flights kind of stop overnight anyways. So instead we went home, slept for a couple hours and came back at 6 a.m. That was my first shift  —  from six to noon on Sunday.

That first shift was pretty chaotic because nobody knew what was going on. The Trump administration put out this ambiguous statement and then there was conflicting policy guidance on the ground, and no one really communicated with the agencies about what they were and weren’t supposed to do. So we were kind of scrambling, and at that point there were people filing habeas petitions [a petition proceeding a civil action against the government agent holding a defendant in custody]. It was kind of a mess.

But we were also building a plane as it was flying. To the extent that there was bandwidth leftover from not working with families on the ground, we were trying to get systems up and running so we could manage ourselves better. But at that point, we didn’t have a social media presence and the word wasn’t out yet.

One of the biggest differences between then and now is that it was more important then for us to be standing holding signs advertising that we were lawyers. That was completely how we interacted and how we found out about people in need, either because people coming off of a flight saw somebody who was taken aside or because family members were sitting out here in the terminal waiting on loved ones who hadn’t come through. They would approach us and let us know, “This is the person, this is their situation, can you help?”

Now we’re more organized and do less actual intake here in the terminal itself. We get most of the people we help through the entry process from what their loved ones input online. We have the travelers’ information and we’re able to track them and know which flight they’re going to be on.

The people we help are coming from all over the place. Initially, we were focusing on the seven countries on the list, but people from all over the world have been having trouble getting in even if they have green cards and valid visas. Before we weren’t really monitoring flights coming in from Latin America or East Asia and now we do, because people give us their information and say we think we may have trouble. And we’re seeing people having trouble from places other than the Middle East. Now it’s a global thing.

We have gotten a very warm welcome in O’Hare from management, staff, passersby and certainly the families of travelers themselves. It’s been pretty heartening to see that support. We actually had to tell people to stop bringing us food because we can’t store any more of it and it was going to waste. One of the small organizing groups that was involved in the Women’s March has organized to bring three meals a day for us here to the airport, and local businesses within the airport and beyond still donate to us. It’s been really encouraging to see that.

We’ll be here as long as there’s a continued demand for our work and a continued supply of people to do it. Nothing here is over; everything is temporary. It’s a temporary executive action. It’s a temporary stay on the executive action. Even though we’ve slipped into a cycle of this new normal, this is a new normal with an expiration date. Regardless of how things are going right now, they will change again, and where we add the most value and have the greatest need for our services is when there is uncertainty. We’re prepared and waiting for the uncertainty to arise again.