‘I Have Not Slept’: Chicago’s Ukrainians Worry About Family Back Home

As Russia’s war on Ukraine escalates, local Ukrainians share how their families are dodging bombs, becoming refugees and praying for peace. 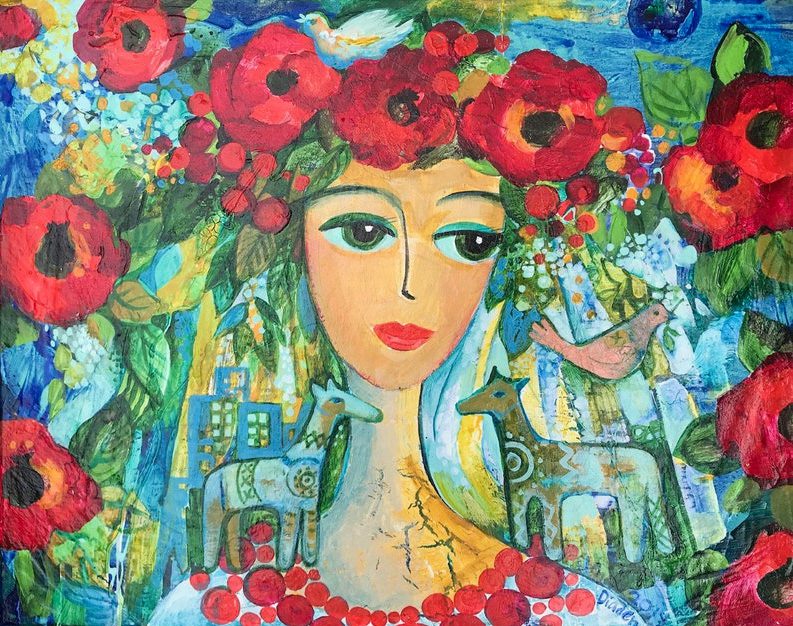 As Russia’s war on Ukraine escalates, local Ukrainians share how their families are dodging bombs, becoming refugees and praying for peace.

On Feb. 24, in a major escalation of an eight-year war, Russia launched an invasion into Ukraine. More than two million refugees have fled their homes so far. Ukrainians around the world face an unknown future and are worried about the safety of their loved ones and their homeland. Here in Chicago, they have joined the rest of the world in protests and rallies against the Russian invasion.

Ukrainians in Chicago shared stories about their families stuck in Ukraine and what they think people should know about the ongoing war. 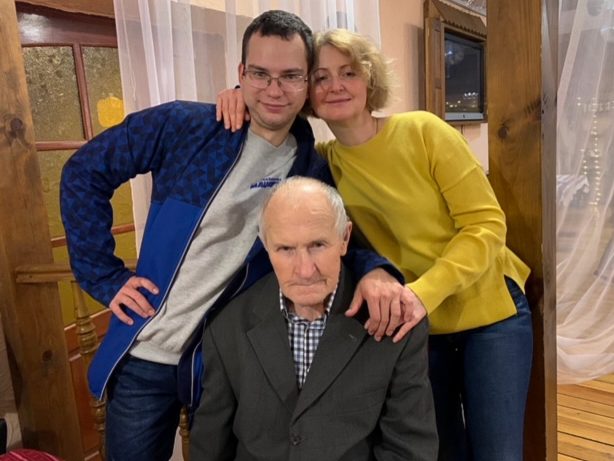 ‘I Have Not Slept’

My dad, my 19-year-old nephew, friends and relatives are in Ukraine. Some are in Kyiv, and really, my heart is broken. I have not slept since February 24. Ukrainians all over are feeling the same. Peaceful civilians are being killed, and they just want to live in a free, democratic country. The Ukrainian community in the Chicagoland area is coming together in solidarity and are praying for a peaceful resolution. We are offering help to those who have been displaced and injured from this horrible Russian invasion.

Our army and people staying in the territory need medical supplies because we don’t have enough supplies. When donating, it is important to verify the source through local radio, news and Ukrainian churches that have confirmed that the charities are legal and true. Donate to Revive Soldiers Ukraine, the Ukrainian churches in Chicagoland and Era Nowych Kobiet in Chicago, which is collecting donations of clothing, shoes and blankets. 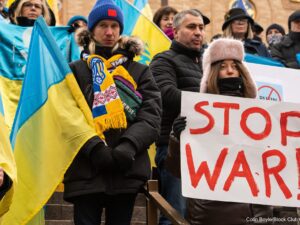 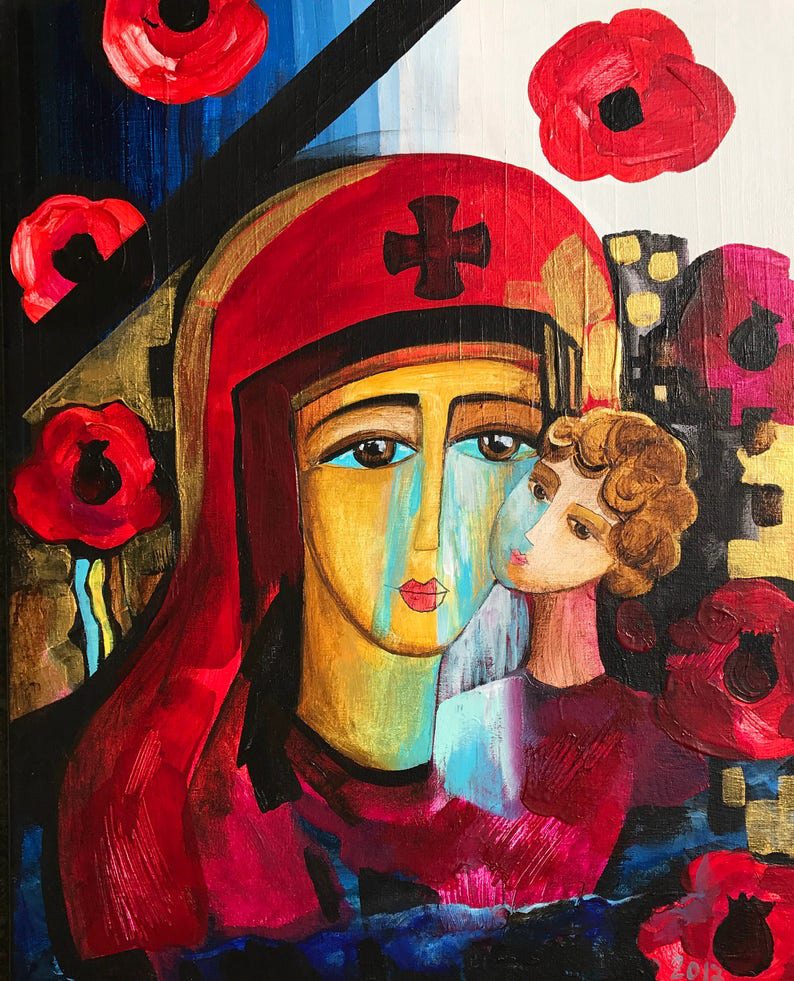 Elena Diadenko, "Crying Madonna" 2017, acrylic on canvas, 16” x 20”. “I painted this in memory of all the dead soldiers in the war in Donbas [in eastern Ukraine],” says Diadenko, “but now all Ukraine is crying.”

‘I Tell Him To Stay Strong’

I was born in Ukraine in the USSR and moved here in 1992. I have my father, relatives and tons of friends in Ukraine. So far everyone is OK and safe, and I keep in touch with them every day. They live in Poltava, Ukraine, seven hours away from Kyiv. My father is 80 years old and scared, but I tell him to stay strong.

My art revolves around Ukrainian folk art and preserving my heritage, culture and my personal interests, including art about protesting any war. I have an exhibition from March 4 until March 27 at the Ukrainian National Museum in Chicago. There will be one glass wall dedicated to Ukraine, and proceeds will go to Revive Soldiers Ukraine, which helps wounded soldiers and their families. Ukraine is not the strongest with medical supplies, and that is why aid for those soldiers who are injured is essential during this time. The money goes through PayPal and is easiest to reach the soldiers.

At my high school [in Chicago], our principal checked on me and hugged me. My students saw my red eyes from crying, but they didn’t know much. I explained the war to them. Now they are learning, sharing tweets with me and asking me every day about my family.

Ukraine is beautiful. The people are very hardworking, hospitable, warm and patriotic. Our president did not leave and is fighting with our soldiers on the frontlines. 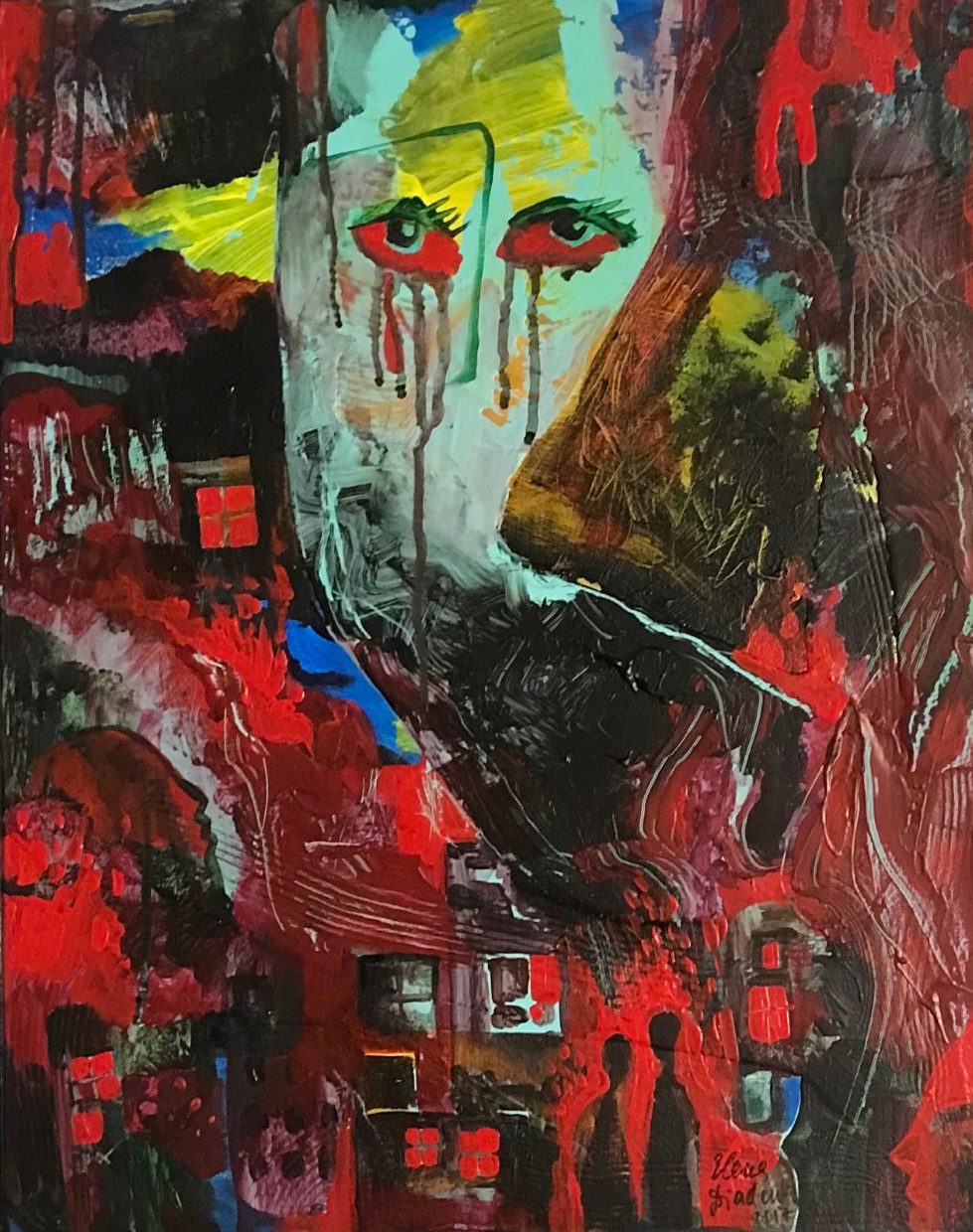 ‘I Believe In Our Victory’

My family is mostly in western Ukraine near the Polish border. They have constant sirens going on. They are preparing for the worst and hoping for the best. There has been no bombing in that region, but they are constantly on the lookout.

Some of my female cousins and their kids went to Poland and have separated from their husbands, not knowing if they will see them again. One [of my] cousin’s children have been crying. They are so traumatized whenever they hear noise. My neighbor from [back in] Ukraine is a teacher, and she told me her students who are coming as refugees to western Ukraine are shaking and need serious therapy because they are traumatized and scared.

Lots of families have been coming from eastern Ukraine to the western part where schools are hosting them with beds set up. They’re not being directly bombed right now, but at any point it can happen because our sky is not protected. That’s why Ukrainians have been asking the U.S. government and NATO to protect our sky.

As an ICU nurse, we fought so hard to save lives, and for a life to be taken so easily, [the invasion] is hard to wrap your head around it. Russia always had its political agenda, but that did not stop Ukraine from improving our infrastructure especially after the 2014 revolution. We were going forward, and now Kyiv is being destroyed. Having to watch this destruction is devastating, to say the least. It is my motherland, even though I have been here since 2002.

As an immigrant in this country, I have to say the United States has been the greatest country in the world, because the people here are amazing. I’ve gotten so much support all around, and I do consider myself an American, a Ukrainian American. 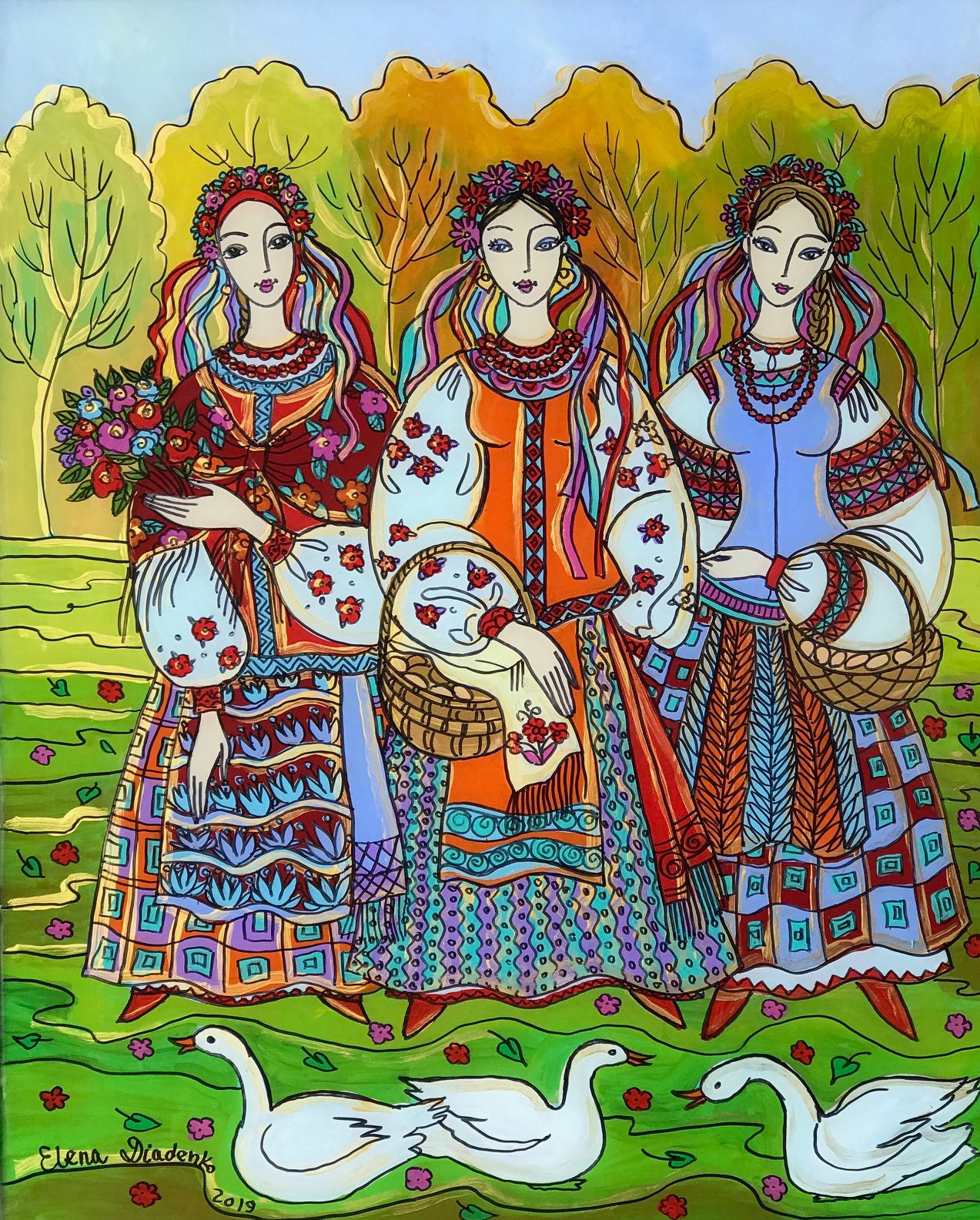 ‘We Need Protection In The Sky’

I am from Lviv, and there have been sirens going off in the city but no bombing yet. The city is also trying to protect their historical valuables. Immigrants are traveling to Lviv right now.

The Russian army is finding it more productive to shoot at civilians because it causes more damage. Medical aid and military supplies have been collected in Chicago and were sent to Ukraine to help people and wounded soldiers. It starts getting concerning that money and supplies alone are not going to stop war. It has to be much more than that. Ukrainians in one voice say we need protection in the sky. I understand that this could trigger an even bigger war.

There is irreversible damage the civilians are paying, especially children and newborns. I don’t know to what extent sanctions [against Russia] help, because yes, it punished the beast, but it irritates him even more, potentially motivating even more unpredictable actions. But it is not too late to take a stronger stance and a more proactive position before a potential World War III. Putin is a paranoid and sick man who is afraid. Ukraine has brave and patriotic people.

‘No One Helped Them’

I moved to the United States five years ago from Kyiv for work and because I have a lot of relatives here. My parents live in the Kyiv suburbs. They left Ukraine two or three days ago, leaving everything behind, including their animals, dogs, cats, fishes and gave the house keys to the neighbors. They also left their vehicles because they had no gas. But the good thing is they were able to pay their way to cross the borders, carrying with them some underwear, shirts, a couple of bags and went to Romania. They went straight to Romania’s U.S. embassy, but no one helped them. My dad is Jewish, and they will probably go to Israel, but I don’t want him there. I want him here in the U.S. with me. Nobody wants to stay here and leave their personal lives. What is he going to do here? I understand my dad is 65, and he doesn’t know anything in the U.S.

Time is valuable in Ukraine, so sending clothes from here is less convenient than sending money. Sending money and donating to causes in Ukraine will help and is much better. Everyone will say close the sky, and if they close the skies, this will be a war between NATO and Russia.

The situation is far worse than it shows on TV.

Clarification 3/10/22: This story has been updated to clarify Maria Solonynko’s full name.

Editor’s Note 3/11/22: A story within this article has been removed at the interviewee’s request.