Beyond #MeToo and the Atlanta Spa Shootings

How KAN-WIN is helping to end gender-based violence in Chicago’s Asian and Asian American community in a time of increased hate crimes. 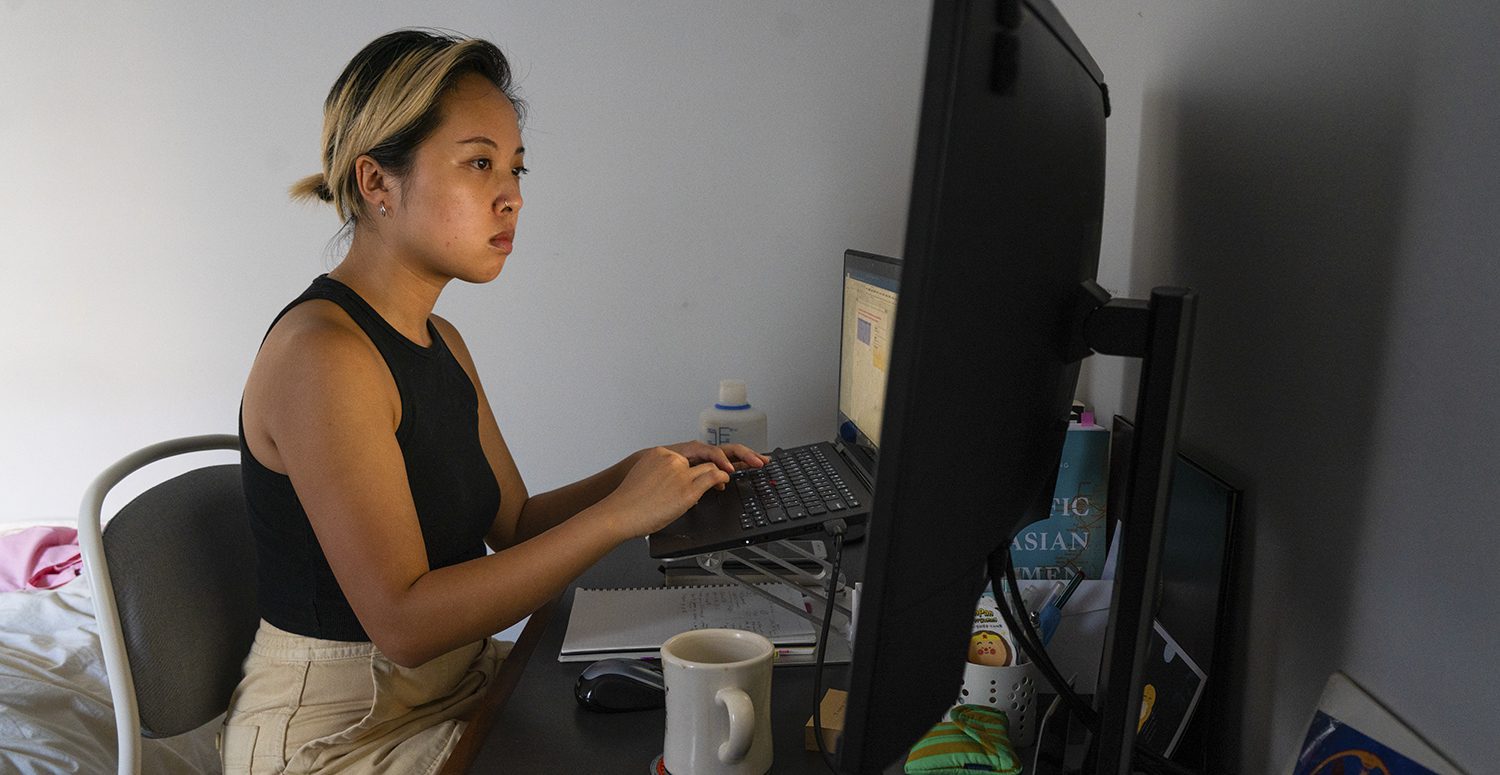 Photo by Camilla Forte/Borderless Magazine
Denise Huang works from home on July 19, 2021 in Chicago, Ill. Huang, a sexual assault specialist at KAN-WIN, works directly with survivors and does community outreach for the organization through educational workshops and presentations.
By Adriana RezalSeptember 22, 2021January 21st, 2022Organizing, Trending

How KAN-WIN is helping to end gender-based violence in Chicago’s Asian and Asian American community in a time of increased hate crimes.

KAN-WIN was founded on August 15, 1990, the 45th anniversary of Korea’s liberation from Japanese rule. It was a fitting start for the organization, which began as the first domestic violence agency in Chicago to serve the Korean American community.

Thirty years on, KAN-WIN has expanded its work to eradicate gender-based violence to work with Asian Americans in Chicago and its suburbs. Asians are Chicago’s fastest growing racial or ethnic group, with the city’s Asian population increasing by over 30 percent between 2010 and 2020. An extremely diverse population, Asians are also the most economically divided of any racial or ethnic group in the country, with both low income and high income families.

Borderless Magazine checked in with Denise Huang, a sexual assault specialist at KAN-WIN, to see how the organization is fairing during the COVID-19 pandemic and the recent, ongoing wave of anti-Asian violence.

Borderless Magazine: Who does KAN-WIN serve?

Denise Huang: We focus on the Asian American community because that’s the origins of our agency and the composition of our staff. We know that there have historically been disparities in how the stories and experiences of survivors who are Asian, who are immigrants, whose first language isn’t English, get sidelined, omitted or just handled poorly.

We have a few clients that are undocumented and who have active asylum cases. They might be single parents. Oftentimes, they are working food or hospitality jobs, so they might have job precarity. We often see cases involving divorce or identity theft. If you had a support network or weren’t ostracized by your community for going through trauma from a violent incident, you might be able to find resources or navigate this in a way that doesn’t feel as urgent. But oftentimes for survivors of gender-based violence, they’re going through so many other things, and it can be difficult to handle all of it by yourself.

Even taking that first step can be confusing, especially for folks who are looking for city- or state-based responses. If they want to pursue a legal case, file for food stamps or unemployment, those things just add to what that client has already been facing.

Borderless Magazine: How has KAN-WIN fared during the COVID-19 pandemic?

Huang: The pandemic was very difficult for our staff, community members and clients. It was very clear from the start that this wasn’t just a public health crisis, but an economic and a racial crisis.

We had a lot of clients and their families express anxiety, fear and apprehension of leaving the house to do routine things, like grocery shopping or taking the bus, because of that very high possibility that you would be spat on, yelled at or physically attacked.

We also know that during times of precariousness, like a natural disaster, economic recession, or a pandemic, gender based-violence, sexual violence and domestic violence is going to spike. We experienced a moment where we had fewer hotline calls, probably because people who would be calling were home with abusers. For minors, oftentimes school is where a report could be made.

Even before COVID, it was common to see abusers go great lengths to surveil and track the people they are abusing. This was a pandemic flavor of what was already going on, but nonetheless still required a lot more acuity and thinking outside the box.

Borderless Magazine: What response did KAN-WIN see from the community in the wake of the Atlanta spa shootings?

Huang: We have done a lot more workshops and presentations about the history of sexual violence, gender-based violence and the Asian American community. This is very important, but I feel like with the Georgia shootings, there was a lot of attention in the immediate aftermath.

Asian Americans were once again in the spotlight because Asian Americans and Pacific Islanders Heritage Month was in May, but I wonder how long can we hold this energy — it’s no longer a headline. We understand violence to not just be incidents. But as the conditions of violence have been festering, there’s a spike, and then people pay attention in the wake of a crisis.

The majority of the work is quite preventative; there are a lot of inflection points where you can intervene and stop that violence from reaching a spike.The conditions that enabled the shootings in Georgia are still present.

I know the anti-Asian hate crimes bill was passed, which is, frankly speaking, not what some of us in the Asian American community wanted. When you look at the people calling for that, it was oftentimes Asian American celebrities, not the demographic of the Asians who we see have been attacked. It’s often elders, folks in Chinatown — they are more marginalized.

A lot of mayors say, “We’re going to increase police presence.” Well, police are agents of state violence that have perpetuated anti-Asian violence in the form of deportations, cracking down on sex work, and in the form of Trump with his anti-Asian, anti-Chinese, xenophobic rhetoric. It’s a bizarre response that no one actually called for except for maybe business interests or the elites.

Borderless Magazine: What needs are you seeing from clients now?

Huang: For allies and folks who want to learn more or support, it’s important to realize your role, whether it’s to volunteer, donate money or amplify survivors’ voices. I see my role as an advocate as simply equipping my fellow community members to support survivors in their life. It’s important to continue supporting survivors and the folks who have been doing this work since day one.

It’s clear that not just KAN-WIN but most agencies across the U.S. have very limited options for survivors. It’s important to realize that there are many survivors who we will never work with because we don’t offer what they’re looking for.

The mission of KAN-WIN logistically requires that we have more options. We have to have outlets for the folks who don’t want to use the police or pursue a legal case because there’s an understanding that those are violent systems. Maybe they want a genuine apology and a guarantee that this won’t happen again. It’s going to be an arduous and retraumatizing process, but just because they don’t want to go through the wringer like that doesn’t mean that they can’t get anything at all.

Our mission of eradicating gender-based violence for all requires us to examine the conditions and systemic factors, not just going in with our assumptions as the advocate or putting out a little fire. It requires a whole reorganization of our principles and our worldview.