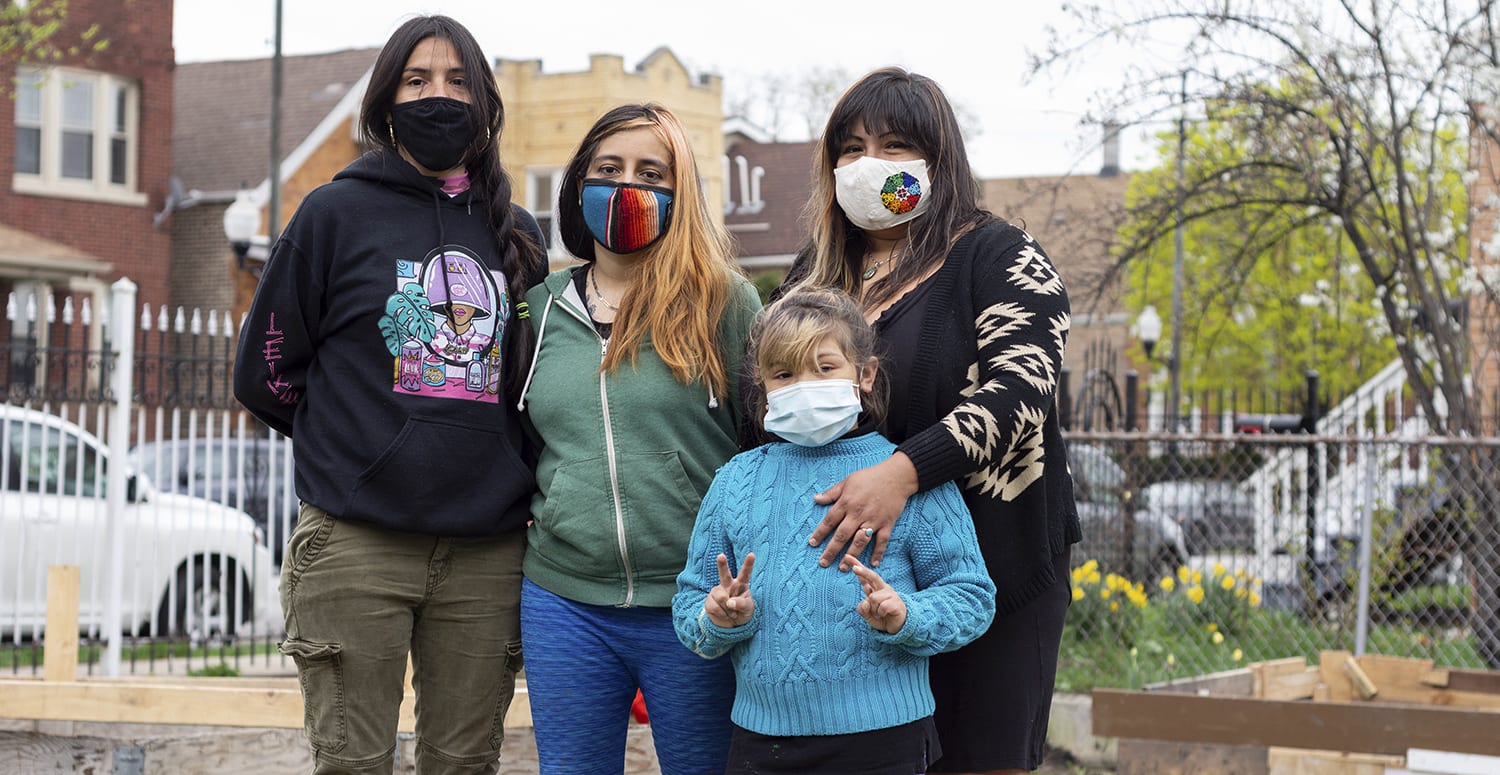 Elvira* and Mari Posa* and Pura* of Femme Defensa, and Pura’s daughter work on structuring garden beds on a plot of land in Little Village on April 9, 2021 in Chicago. Ill. This farm will be known as The Ruda Farm, named for a plant with healing capabilities. The farm  is created as a sustainable way to provide fresh food. Femme Defensa will use the fresh produce grown at this farm to supply their Free Store in Pilsen. April Alonso for Borderless Magazine/CatchLight Local

How a Femme Liberation Collective is Practicing Community Care

Formed by three Latinx femmes, Femme Defensa is addressing a lack of government aid in the Chicago neighborhoods of Pilsen and Little Village through direct community care.

In May of 2019, a 36-year-old Chicago woman named Elizabeth Martinez went missing. She was last seen in Pilsen and was found safe nearly eight months later. While police did not release details around her disappearance, many residents of Pilsen and Little Village believed it came amid a spate of attempted abductions and incidents of gender-based violence in their neighborhoods.

Community member Kari* knew that these were not solitary incidents and that femme-identifying people in the surrounding neighborhood needed protection. In October 2019, she and other femme-identifying folks and survivors of gender-based violence came together to form Femme Defensa. The group supports femmes in Pilsen and Little Village and provides them with tools and tactics to keep themselves safe.

For instance, Femme Defensa has developed self-defense Muay Thai classes and provided walking buddies for people between transportation stops and their home. Its members have also handed out packs with items for self-defense and trained people in bystander intervention, particularly rapid response tactics to resist ICE raids.

When the pandemic first surged in Chicago, Femme Defensa shifted its focus to distribute food to residents in Pilsen and Little Village in need. Acknowledging that this is a need that will be prevalent long after the pandemic, the group has since extended these efforts to other parts of the city’s South and West sides.

Borderless spoke with Femme Defensa organizers Mari Posa* and Pura* about what it means to respond to the needs of neighbors and the importance of creating sustainable communities.

Pura: I think in the short amount of time Femme Defensa has been a group we’ve brought a lot of light to issues. I think we’ve sprouted a lot of awakening to take action on things happening in our neighborhoods.

The jobs that we work on range from supporting someone coming out of a domestic violence relationship to responding to an immediate need such as housing, financial assistance or baby and hygiene necessities.

Mari: There are so many foundational needs in the community that still aren’t being met, like people getting food to things like safe and affordable housing and access to a doctor. And there’s a need in the household with domestic violence. Domestic violence calls have skyrocketed during the pandemic.

In response, we have been able to provide direct survivor support by helping people escape situations of abuse and accompanying people to get protective orders, if that’s what they want.

It’s literally supporting the survivor and pursuing whatever avenue they want. We want to work with the person to realize their goals their way.

When COVID happened, it was clear that what people needed was food. That became a huge focus of what we do.

One of the primary things that we’ve been holding down since last February or March is this food pantry stocked with donations. It started off in Harrison Park and then moved to Pilsen Alliance’s office where it became a free store with a variety of donations of food, clothes, pads, baby clothes and supplies. Any leftover produce from the free store is used to fill up a Love Fridge that we signed up to take care of, in the plaza at the corner of W. 18th St. and S. Loomis St. We’ve been fundraising to do the grocery runs to fill it. It’s a 24-hour access food resource for fresh food and dry goods, but it’s going to be premade food packages sometimes. It clears out pretty much every day. I’ve filled it twice this last week.

We also provide people with direct access to food and resources, utilities, stipends and stuff like that through our partnership with [mutual aid initiative] Pilsen Solidarity Network.

I think showing up in the community has motivated a lot of people to take initiative in their own way. A lot of the folks from the pantry who start to come into our free store now help us set up at the free store. They invite their neighbors, or if they know that their neighbor can’t come, they stack up their baskets for their neighbors and for people that they’ll walk by on their way home.

People should be highlighted for the little things they do. They go out of their way to make somebody else’s survival a little more possible. Many of these people are elders themselves when they should be home resting.

Pura: Our main belief is to make sure that our people survive, and we’re going to make sure that we do this together. We would bring food from Pilsen to La Villita to share. We would bring food from Back of the Yards to help Chi-Nations Youth Council. It starts with a simple word-sharing, and from there it balloons, and we see who’s capable of stepping in more. That opens the door to other people who just check in with us and say that they’re interested.

We ask people, “What do you need?”, not necessarily tell people that this is the only thing we can do for you. We try to work around their needs. I think that’s where the difference is between how the government operates and how we operate to meet the needs in our community.

Mari: Having had to go to food pantries as a kid myself, I’m working through the lens of somebody who received this support. I’m trying to make sure that what we do has as much dignity and respect and that we try to move forward in an optimistic way.

More than once I have been told, especially by some of our survivors, that they’ve reached out to so many big organizations and nonprofits in Chicago. They tell me, “Nobody has answered the phone. Nobody has reached back out. Nobody has provided me with financial assistance. Nobody.”

That shocks me. That these organizations with these big funds maybe don’t have more answers than us.

There are enough systems in place that our lives should not be as difficult as they are right now. The cost of food and access to food—healthy food, and food that makes sense for our communities—is one of our barriers to sustainability. Because when I think of sustainability I think of two words: opportunity and access. We need both of those to have neighbor-to-neighbor exchange.

But the chain is just so corrupted. At every level, somebody’s trying to profit when this is something from the earth, and it can literally go directly to somebody’s table.

We got to a point where we said, “Fuck it, let’s farm.” So right now we have land in Little Village that a friend is allowing us to turn into a sort of farm for ourselves. That’s going to be our new project for this upcoming year to help sustain the food pantry. And I always go back to this idea I read somewhere: Extreme independence is like a trauma response. We are resisting the traumatizing framework and structures of capitalism and white supremacy.

Pura: Going back to sustainability, we keep saying the word Pilsen with this work, but it’s extended to Cicero, Back of the Yards and Gage Park. This work has gone as far as the need is with how much we can drum up. That’s why we need the support of our community, and the support of people we don’t even know. We’re in this together.

Mari: I wish we could get back to a place where I can just directly perform a service to the person who needs it across the street or down the block.

I hope that people will see that you don’t necessarily have to be someone with finances or a degree or access to all kinds of machinery to do something positive in your neighborhood or for a compañera [friend].

Femme Defensa is just three femme survivors who are out here just literally trying. We’re just trying to put whatever things that we have together in order to make our lives better, and the lives around us better.

*Names have been changed to protect their safety.

For assistance with food or other resources, contact Femme Defensa at 312-549-9814 or femmedefensa@gmail.com.