From Palestine to Chicago’s Little Palestine

Queer organizer Samer Owaida on how to link global struggles against oppression to local movements for change.

Photo by Michelle Kanaar
Palestinian organizer Samer Owaida outside his home in Edgewater on Dec. 10, 2020 in Chicago, Ill.
As told to Ata YounanJanuary 5, 2021January 19th, 2022As Told To, Organizing

Queer organizer Samer Owaida on how to link global struggles against oppression to local movements for change.

When Samer Owaida left Palestine in 2001, he placed over 6,000 miles between him and his extended family. He was just five years old then. He and his mother and sister left their home during the Second Intifada, when over 4,000 people were killed.

A longtime organizer who has stood with various social justice organizations like Black Lives Matter Chicago and Anakbayan, Owaida lived in Little Palestine for over a decade. The stretch of Chicago’s southwest suburbs is likely home to more Palestinian immigrants than anywhere else in the U.S. But he left last year: Finding a sense of belonging in an Arab community that often admonishes queerness was hard.

Today Owaida organizes with the Palestinian Youth Movement, a collective of Palestinian and Arab youth who seek an active role in the liberation of Palestine from Zionist occupation and underscore joint struggle amongst all oppressed and indigenous people. At the Unversity of Illinois at Chicago, he also researches the structures that inform gay and bisexual Arab men’s understanding of HIV. He is quickly learning that community organizing often means having difficult conversations with people who have different worldviews and values.

I’ve definitely had to censor myself, especially in the beginning stages. My community, unfortunately, is not in a place where they are able to navigate queerness.

I moved out of Little Palestine because of how toxic it got. My first job out of undergrad was at an Arab nonprofit there. It was right when I got my ears pierced. I remember coming into work some days, and women would just stare at me and whisper. Sometimes a coworker would come to me and be like, “The client I just had—do you know what he said? He said your kind was sent here as a curse by God.”

Moments like that hurt a lot, in hindsight, because I didn’t do anything to them to deserve their hate. I’m really here trying to fight for Palestinians. But I don’t love my immediate Palestinian community any less. I love them deeply, which is why I continue to do this work. 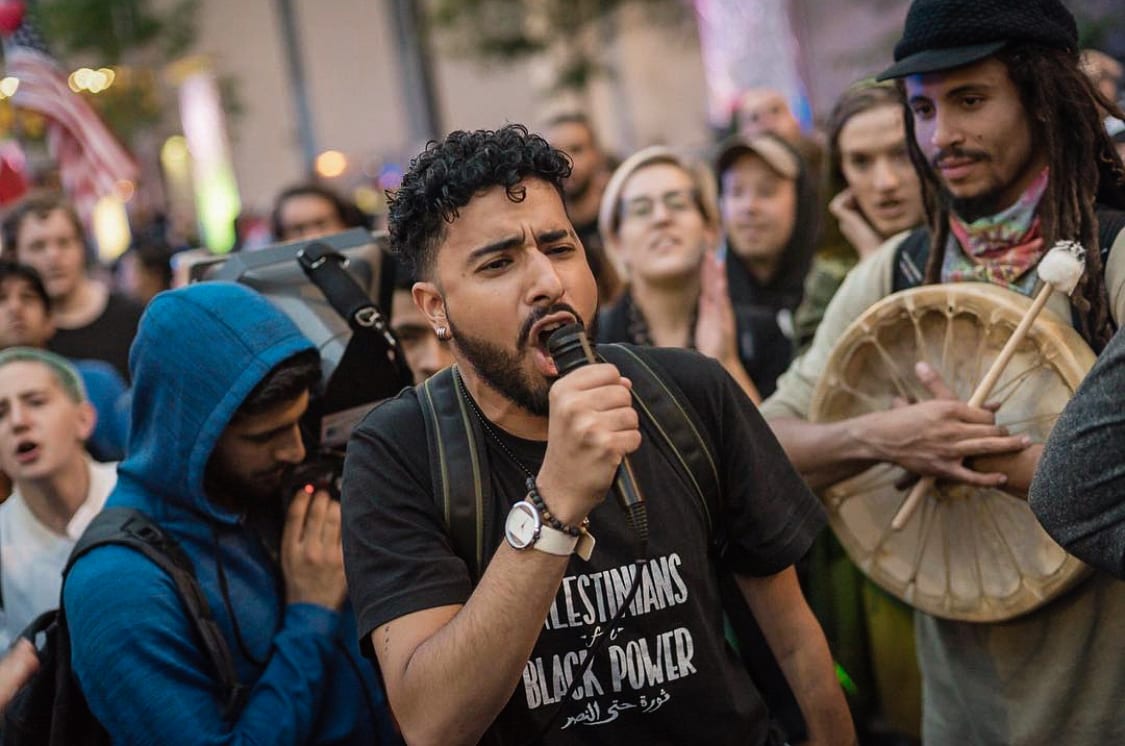 Samer Owaida participates in a downtown protest in front of the Immigration and Customs Enforcement building in September 2017 in Chicago, Ill.Photo courtesy of Samer Owaida

And there has been change. When I went to a protest in Chicago’s southwest suburbs this summer, I got to see aunties and uncles chanting “Black lives matter” in Arabic. It was so cool. Granted, there were only about three or four of them, but this would not have happened 10 or five or two years ago. It’s starting. It’s very slow, but we’re getting there.

The change happens much slower in a more complicated way because you’re working with actual human beings who believe these things. All of our communities believe in anti-Blackness because it is global and permeates every society. It’s not a matter of disagreeing. It’s a matter of pushing people on it, slowly. 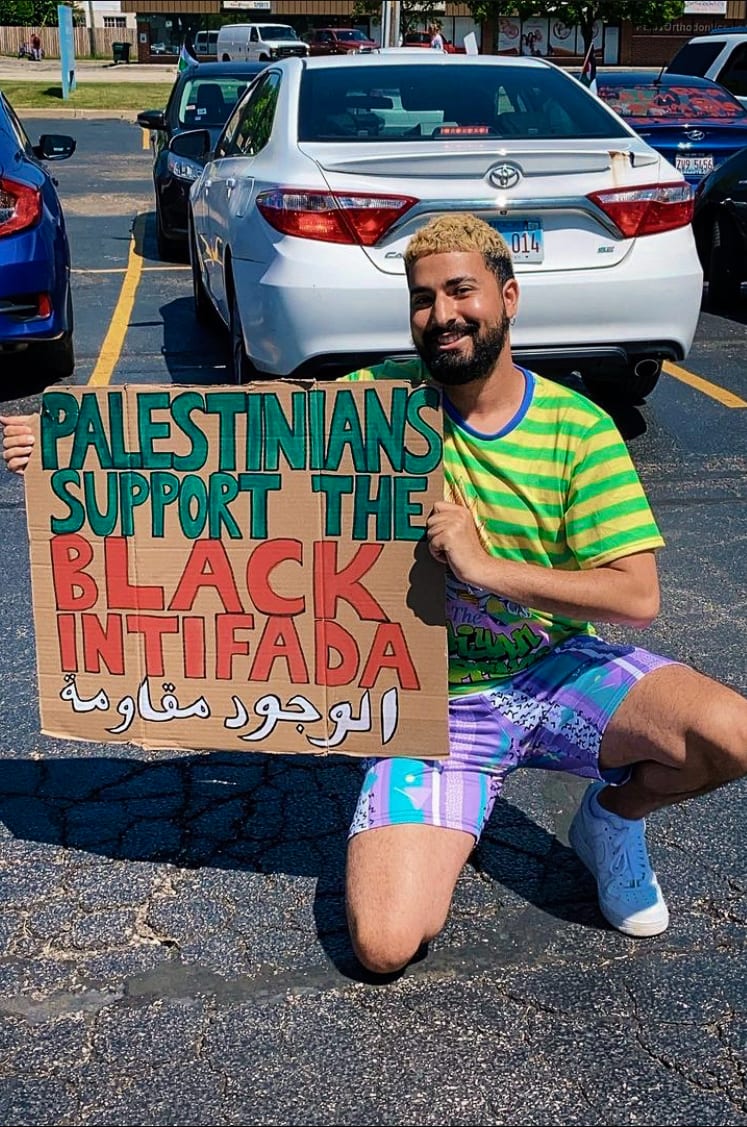 When shit was popping off this summer, I was getting into a lot of arguments with my mom. She’s anti-Black in a way that reinforces horizontal oppression. As a hijabi woman, she’s experienced racism from Black folks, so she can’t see beyond that.

Then moments later, she says, “But Obama became president.” And I say, “Okay, mama, let’s look at Palestine. Look at who our president is. He’s a piece of shit. Does that mean we’re freed?”

“OK, but the looting,” she says. And I’m like, “Don’t talk to me about fucking looting, mama, because when the Intifada was happening in Palestine, you were all burning Israeli stores. You were throwing rocks.”

I held her hand on the phone for two and a half hours. And I felt I made maybe five percent progress.

Most folks from my community—most immigrants who come from war-torn countries—don’t really understand this country’s really deep and evil history. I always find myself translating to cousins back home how America was founded. Sit down. Let me tell you. What they’re doing here in Palestine is what they did in America in the early stages. They came on this land. They killed the indigenous people on this land. They put them in little enclaves.

So many Muslims or Arabs probably think that prison is natural or normal. It’s where bad people go. For Palestinians who don’t understand prison in this country as an industrial complex, let’s translate it in a way so they can. Since 1967, over a million Palestinians have been imprisoned. That is over 40 percent of the male population of Palestinians. Almost one in two Palestinian men has been imprisoned. What does that mean for us?

Yeah, the face of the enemy changed. It’s Israel. They did this to our people, they hurt us, they came into our land, and they turned it from heaven on earth—one of the most beautiful places in the world—to a place of military bases and checkpoints and pollution and fucking warheads. They’ve turned it to gray. Look what they did to us. 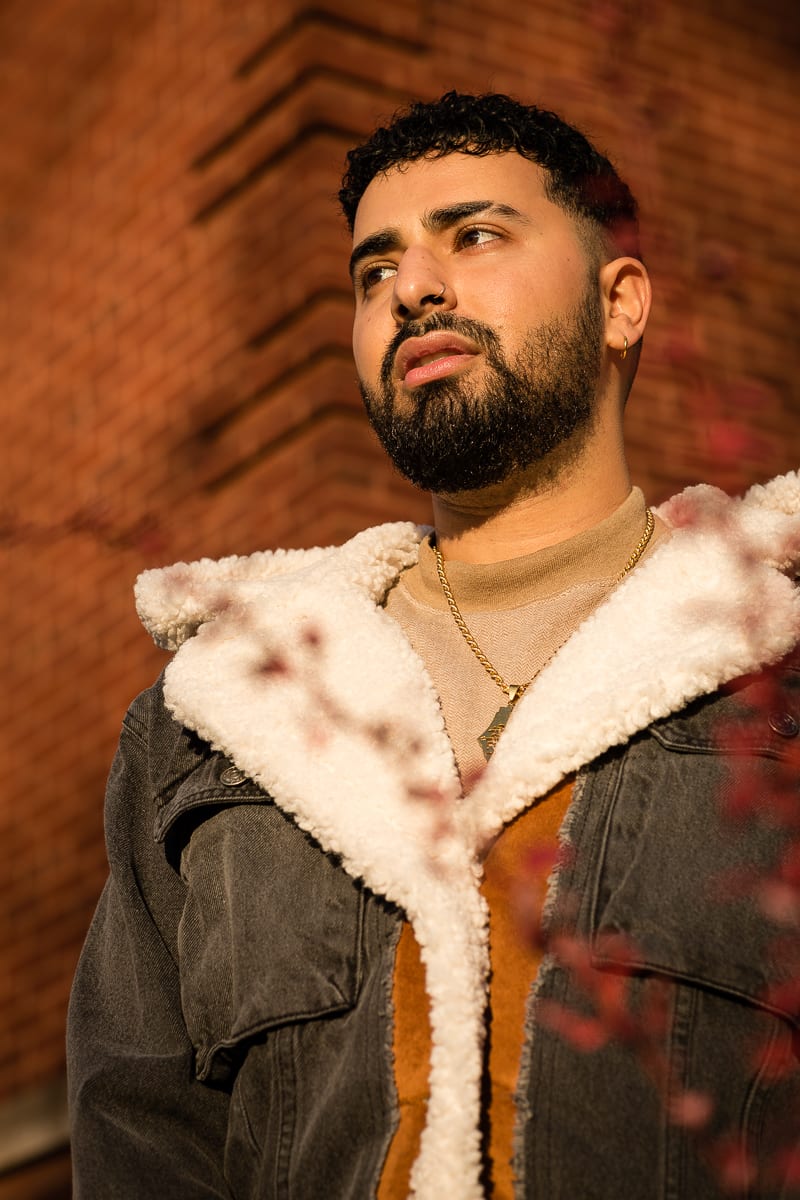 Samer Owaida outside his home in Edgewater on Dec. 10, 2020 in Chicago, Ill. Owaida is Palestinian and a longtime organizer. “The difference between activism and community organizing is trying to build that structure where you aren’t alone in the work you do,” said Owaida. Photo by Michelle Kanaar

Can I get you to start thinking about how that happened on this land, too? We are all struggling globally. Liberation is global and intercommunal.

I can never be happy in this life as long as I know that there are people who are experiencing unjust oppression somewhere because I know what it feels like to be unseen. I was also unseen, historically and politically, as a Palestinian. I don’t want anyone to ever experience that. Because when I think of a liberated world, it doesn’t just stop at the border of Palestine.

My friend Lamis, who I consider an elder in the Palestinian movement—she told me to slow down. I was talking to her about desirability politics, about everything going on in my life.

She’s like, ”Why do you do what you do? You need to find that.

And I don’t think I’ve found that yet.

A Venezuelan Father’s Fight To Earn A Living For His Family: ‘I Was Tired Of Not Being Able To Provide For Them’
A Family’s Search For Home Again After Leaving Venezuela For Chicago
The Essential Guide to Mutual Aid Groups in Chicago
Artist Remembers Migrants Who Died on Their Journey North
She Fought to Get An Education in Afghanistan. Now This Student is Finding Hope at DePaul University.
Fleeing Suicide Attacks, an Afghan Student Finds Freedom in Chicago