Refugees from over 15 countries played in a soccer tournament at World Refugee Day Chicago. 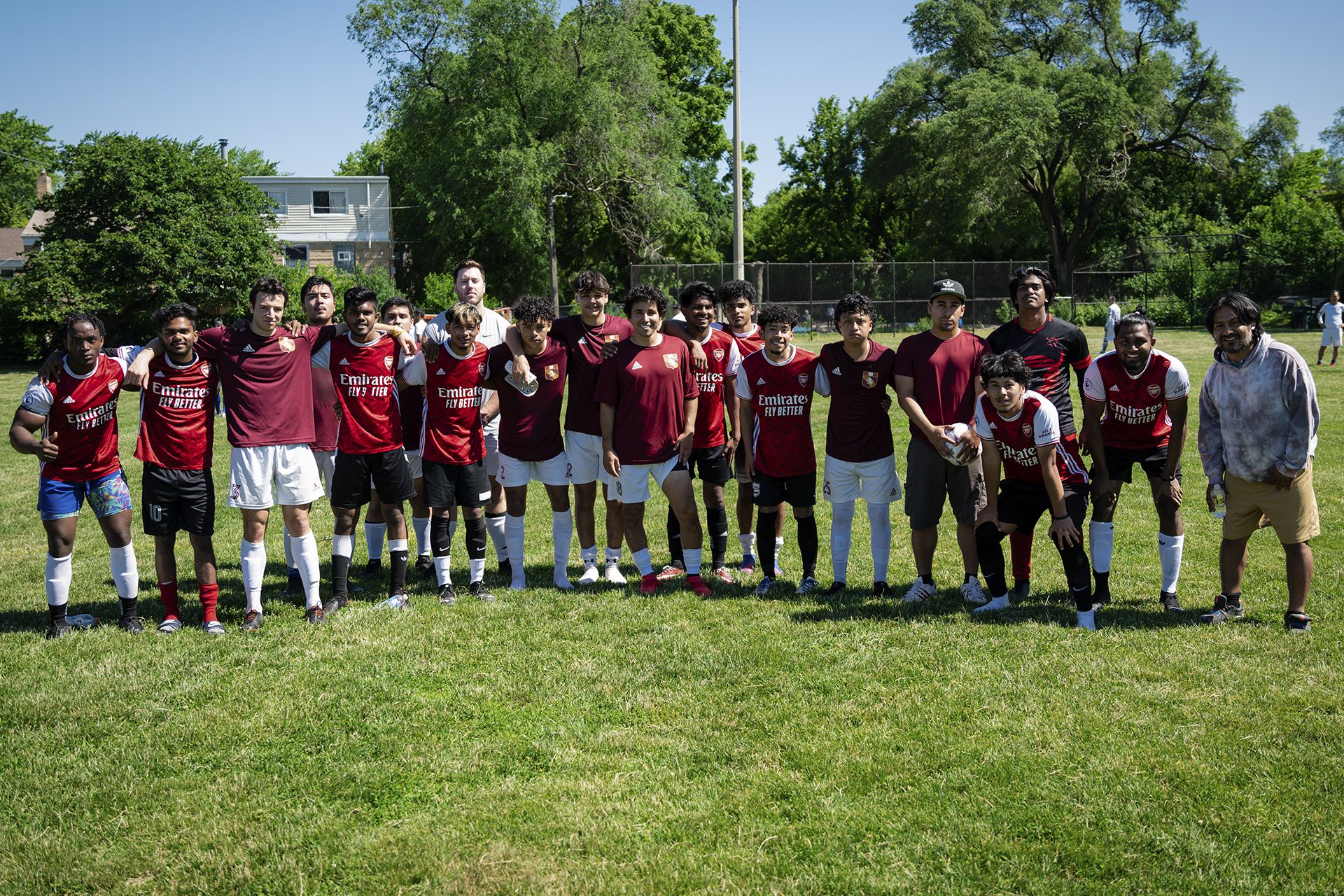 Refugees from over 15 countries played in a soccer tournament at World Refugee Day Chicago.

Early Saturday morning, a dozen amateur soccer teams gathered to compete at Pottawattomie Park on Chicago’s far North Side. At first sight, it looked like another ordinary weekend match at the park.

But as the games kicked off, you could hear calls for the ball in Dari, Malay, Turkish and Spanish, languages changing team to team and as the ball traveled across the field.

The players, refugees and immigrants from more than 15 countries including Afghanistan, Malaysia, Turkey, Tanzania and Togo, were brought together for a World Cup-style competition as part of the 20th anniversary of World Refugee Day Chicago.

Ibrahim Polat, a student at the University of Illinois Chicago, played for the Turkish team.

“This is a good event,” said Polat. “But it should be bigger … maybe nationwide.” 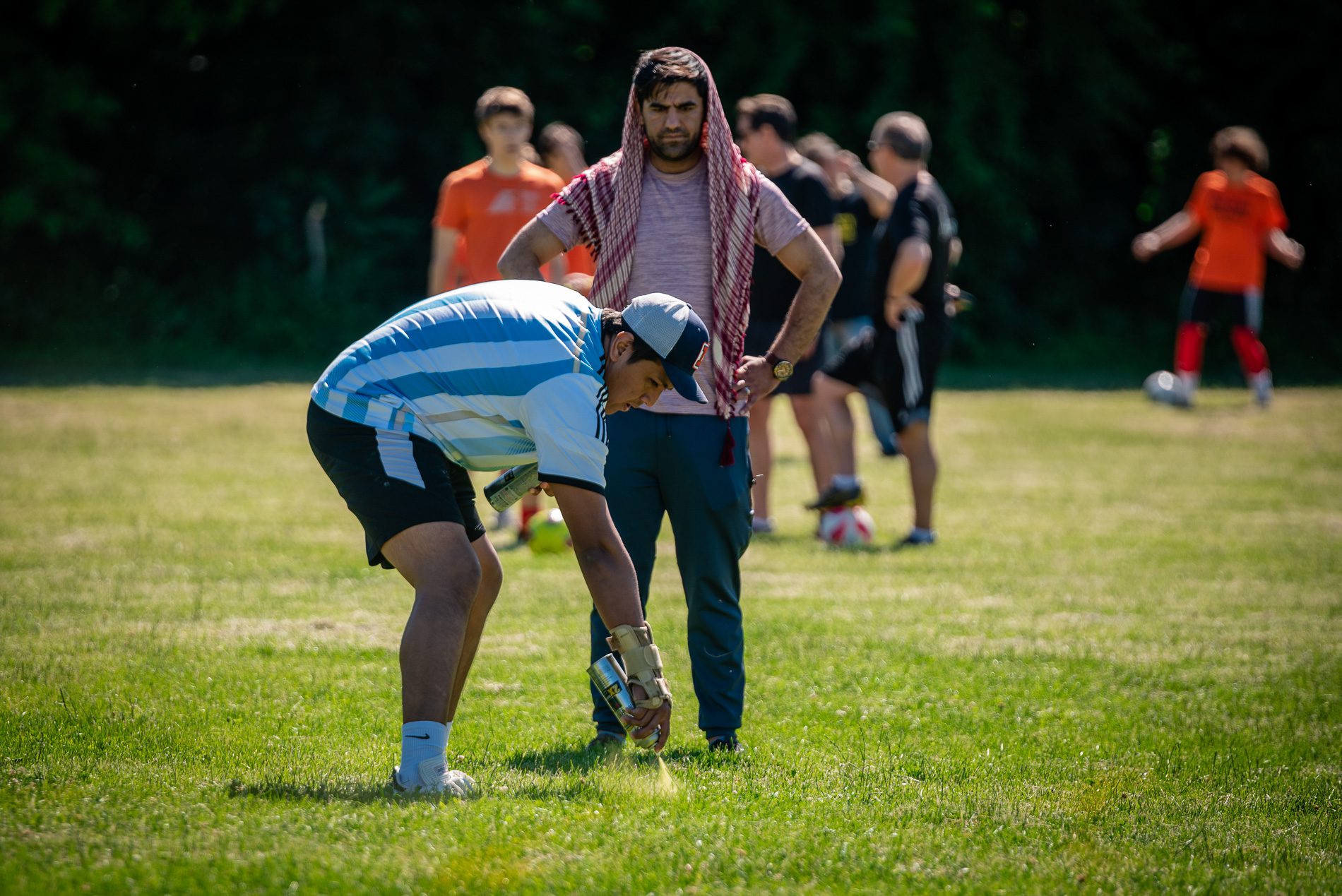 Polat’s family came to the United States five years ago from the Turkish capital of Ankara. After a failed 2016 coup, the government targeted tens of thousands of Turkish people — including government officials, soldiers and private citizens — associated with a movement blamed for the coup attempt. Polat’s family were among the thousands who fled the country.

The family’s transition from Ankara to Patterson, New Jersey, then to Chicago has been tough.

“When you come from another country you know nothing, basically. You don’t know English. You don’t know anybody,” Polat said. “My dad worked at my uncle’s supermarket. But, still, financially, you don’t make a lot of money.” 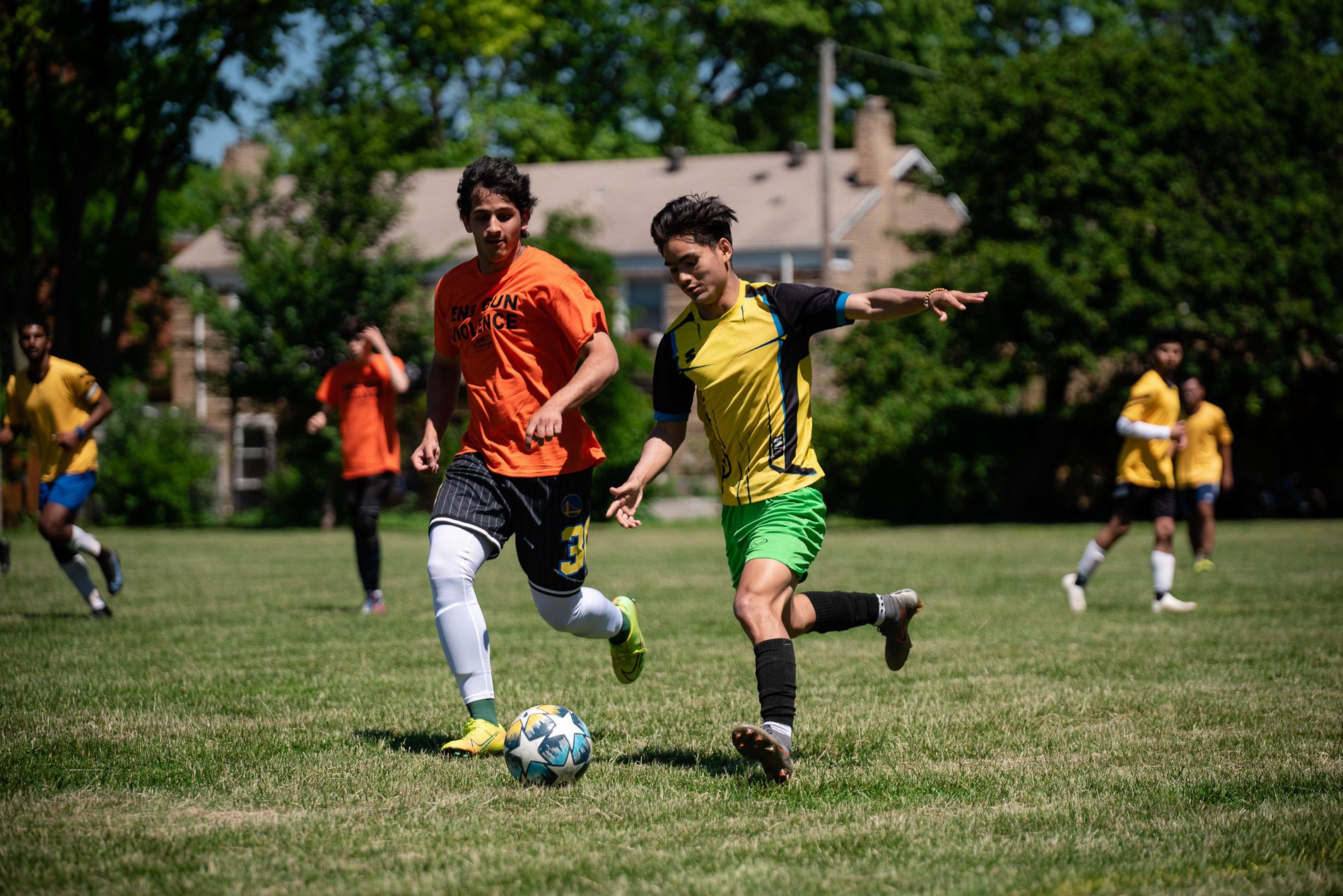 But on Saturday, Polat and his Turkish teammates were not thinking about their hardships. Their minds were on winning the tournament.

At the halftime break, the Turkish team was trailing 3-0. In a last-ditch attempt to turn the game around, they made an impromptu decision to borrow a Turkish-speaking player from the Afghan team. They lost, but Polat was still happy with the tournament. 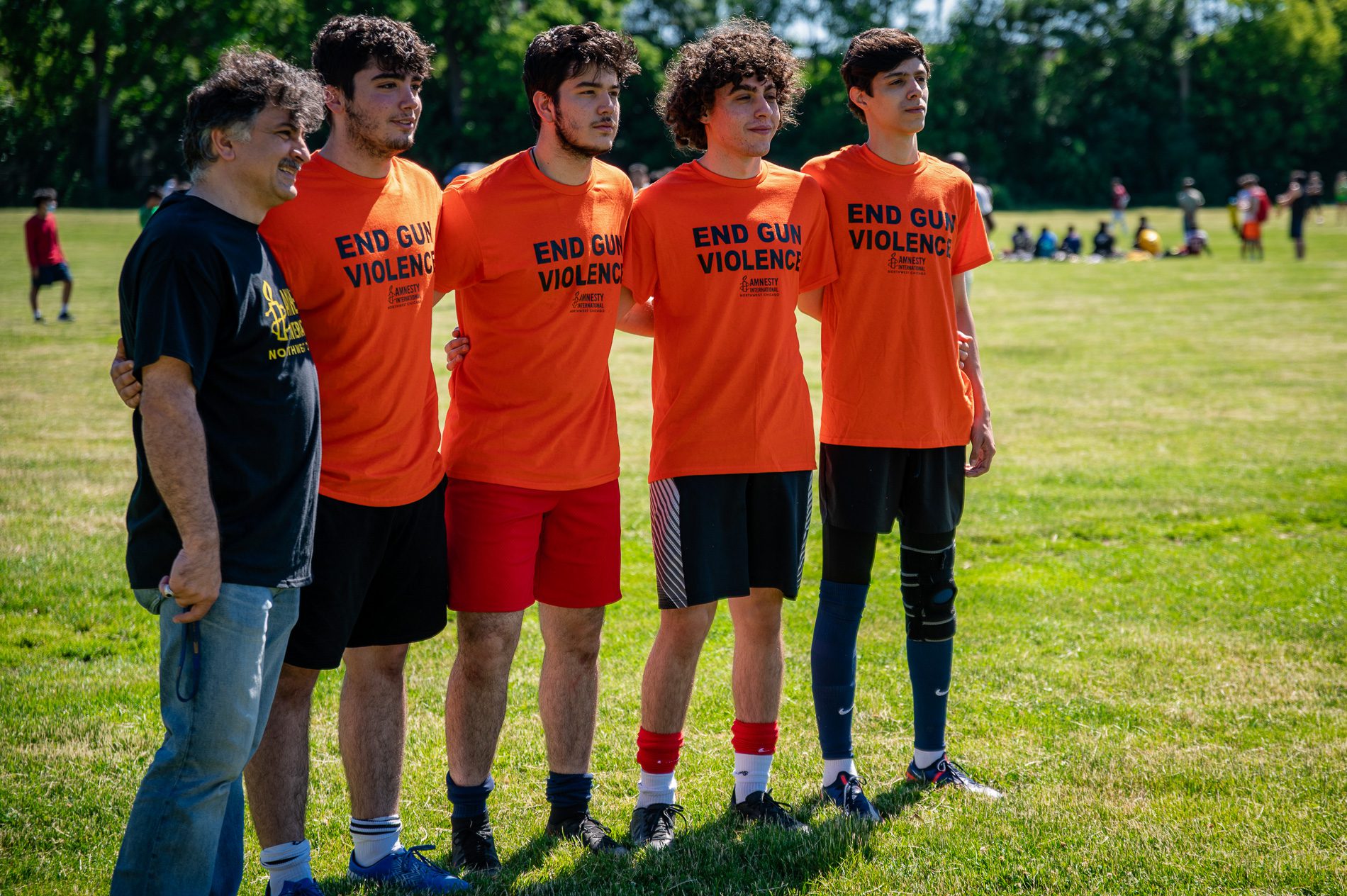 The Turkish team and their coach pose for a portrait in Rogers Park in Chicago, Ill., Saturday, June 18, 2022. A soccer tournament was held in celebration of World Refugee Day.Jonathan Aguilar/Borderless Magazine

“It’s pretty nice that they did an event like this,” he said. “It’s nice that someone cares.”

In addition to the soccer tournament, which returned this year after a two-year hiatus due to the pandemic, the World Refugee Day event included a solidarity march, music and dance performances along with poetry readings from over 20 artists. They represented places spanning Africa, Asia and South America.

Emma Yaaka and Rebkah Zellelew, the event’s lead organizers, were thrilled to hold the event in person at long last. Both organizers have deep connections to Chicago’s immigrant communities. 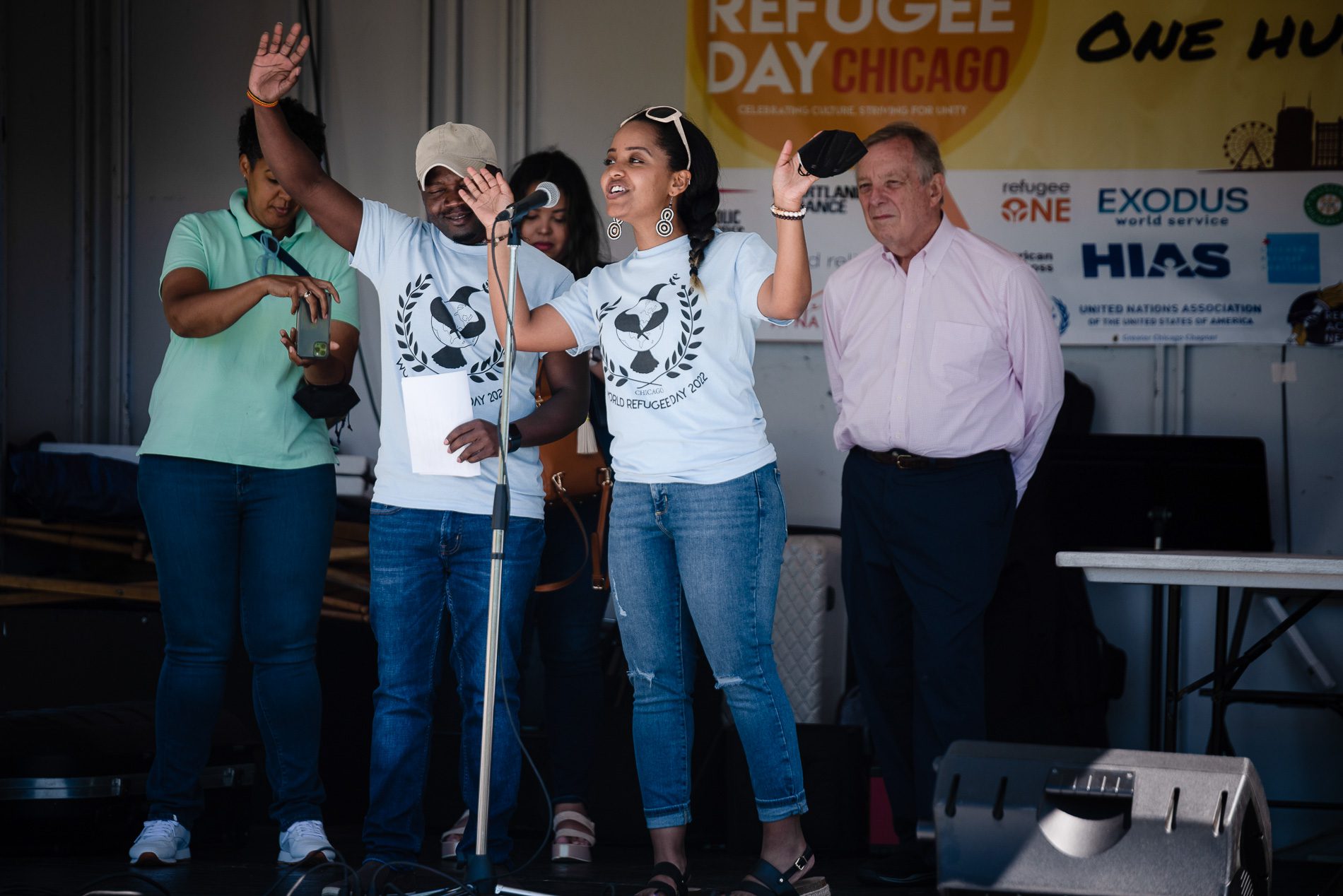 Rebkah Zellelew introduces U.S. Sen. Dick Durbin during the World Refugee Day celebration in the Rogers Park neighborhood in Chicago, Ill., Saturday, June 18, 2022. “I am committed to the cultural value in America of diversity and immigration,” Durbin told Borderless Magazine. “That is what we are, what defines us. Those people who are rejecting it or ignoring it have forgotten American history.”Jonathan Aguilar/Borderless Magazine

World Refugee Day Chicago is a celebration of refugee communities and new arrivals, they said, rather than a place for people to access services.

“Typically, resettlement agencies and organizations that are helping, they [help refugees] from a time and place where there are power dynamics,” said Zellelew. “Our focus is community accessibility, creativity, celebration and grassroots organizing.”

For the most part, the event is also organized by refugees themselves. Yaaka is a refugee from Uganda and lived at a refugee camp in Kenya until he was granted asylum in the United States in July 2018. Zellelew’s father came to Chicago from Ethiopia as a refugee in the 1980s and became an active member of the Ethiopian Community Association of Chicago. Her mother, pregnant with Rebkah, later joined him as an asylee. 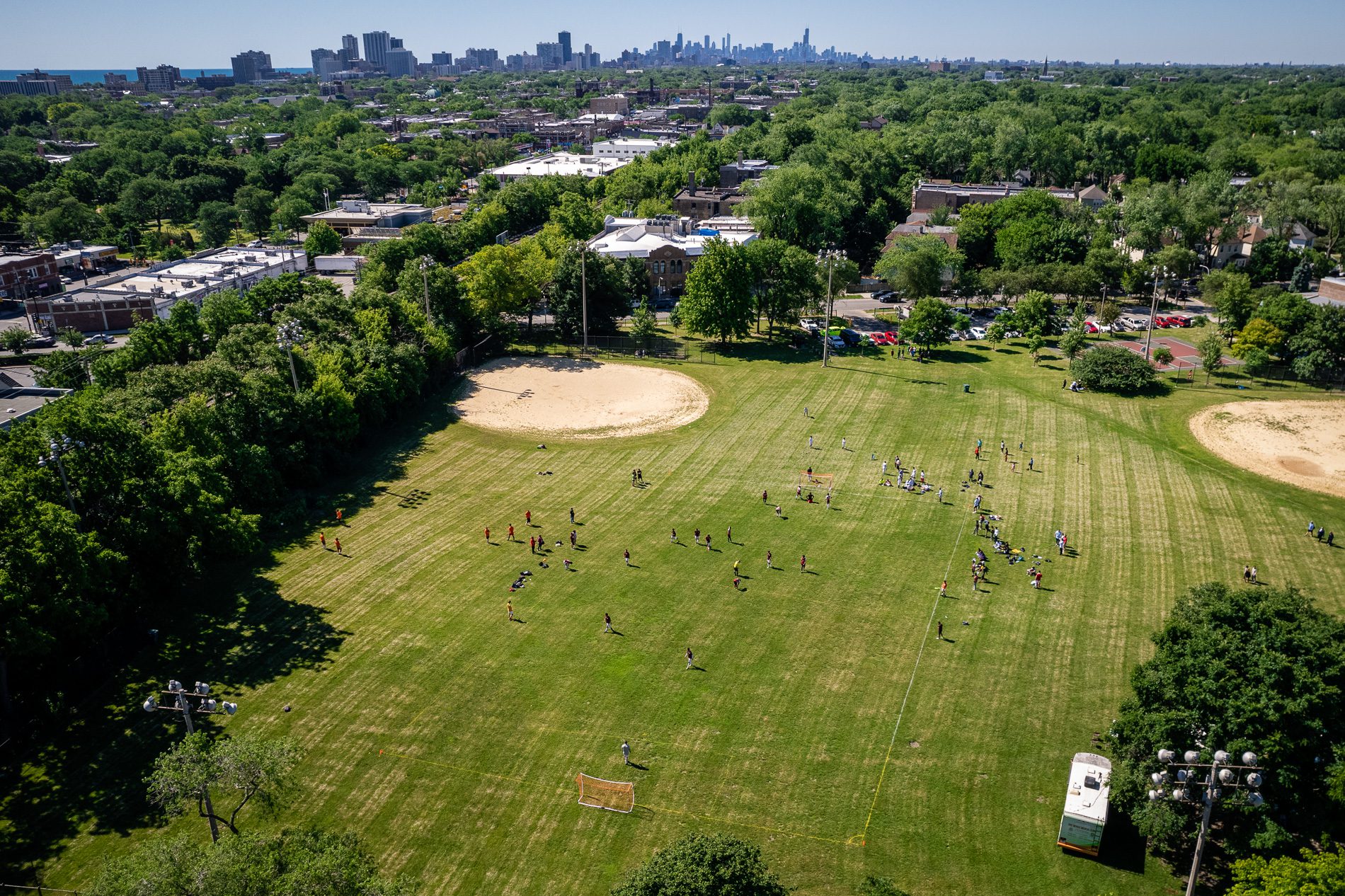 “He was among the first group of Ethiopians to come to Chicago,” Zellelew said about her father. “I think from there, it just became a cultural identity for us to give back to our community and work as a family, because he didn’t have a family here.”

While most of the teams represented refugees from one country, others, like Polat’s, opted to forgo national alliances for the sake of victory. Nyibampa Wilson, a 19-year-old who came from Tanzania to the United States as a refugee in 2012, decided that instead of playing with his old team, he would join Invincible United, an all-Malaysian team.

The Invincibles made Wilson their captain and won their first game.

“I know every single thing about each player,” Wilson said as he was set to face his former teammates. “I played with them. I know where they’re gonna go.” 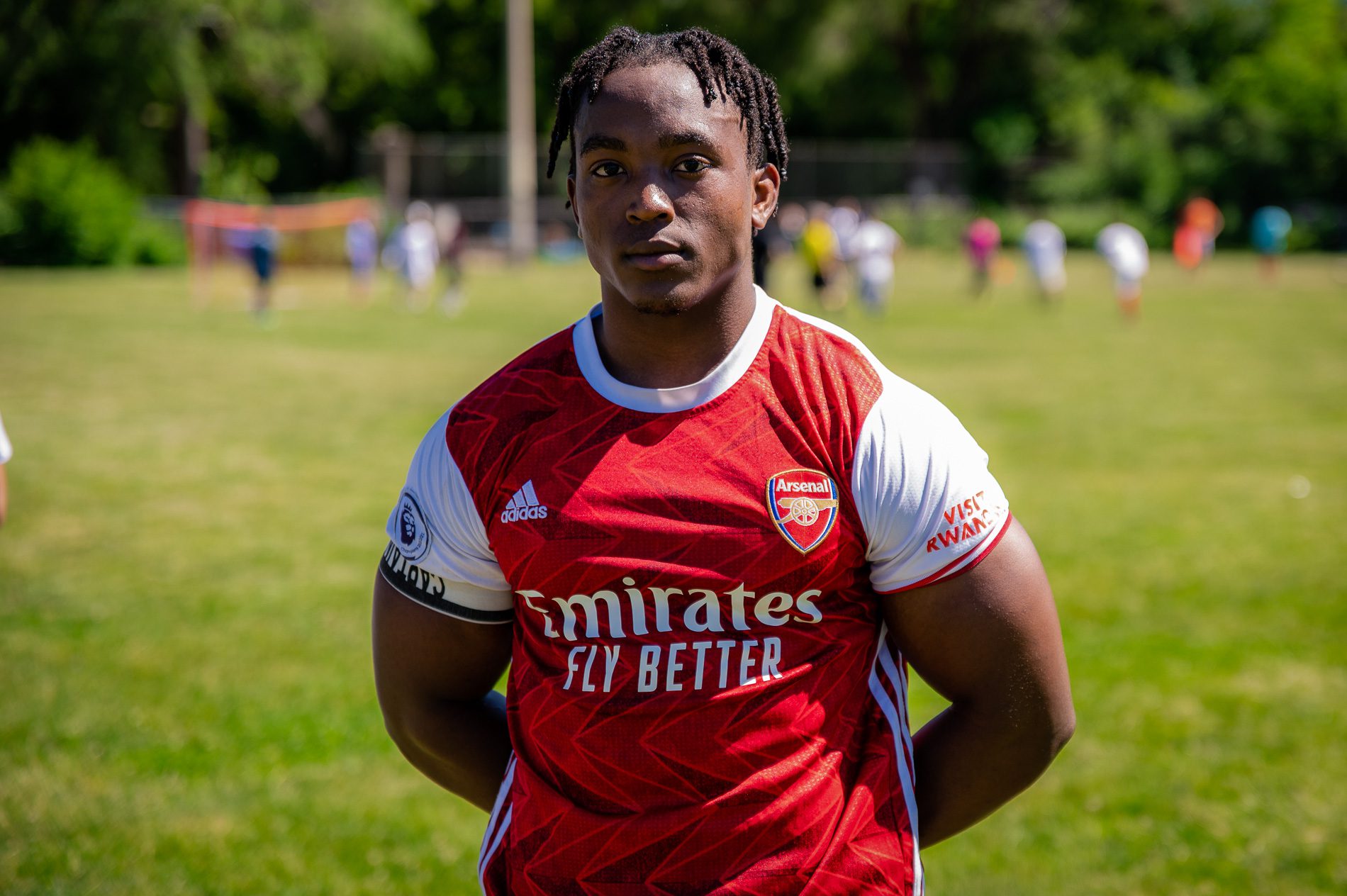 Nyibampba Wilson poses for a portrait in the Rogers Park neighborhood in Chicago, Ill., Saturday, June 18, 2022. This is the first World Refugee Day tournament in which Wilson has participated. Jonathan Aguilar/Borderless Magazine

The daylong soccer tournament came to a close with the victory of the Black Panthers team, which also won the title in 2019. The team’s players came from several different countries, including the Congo, Nigeria, Togo and Senegal. They spoke a mix of French and English, and many had never met or played soccer together before. To bridge the gaps, they called each other nicknames, like Sadio Mané, a Senegalese soccer sensation, and Edouard Mendy, a goalkeeper of the same country who won the Africa Cup of Nations this year.

Moshood Olanrewaju, a Nigerian immigrant who has been organizing the tournament for the past 12 years, said that’s what he enjoys most about the event.

“The black kid was playing with the green kid, and the green kid with the blue kid,” said Olanrewaju, referring to the players’ jersey colors. “Even the team that won, some of them just called each other to play and they showed up. I think that’s the beauty of it.”