Fueled by a love of cooking and economic necessity, out-of-work chefs like Jasmine Sheth have launched restaurants without brick-and-mortar locations during the pandemic. 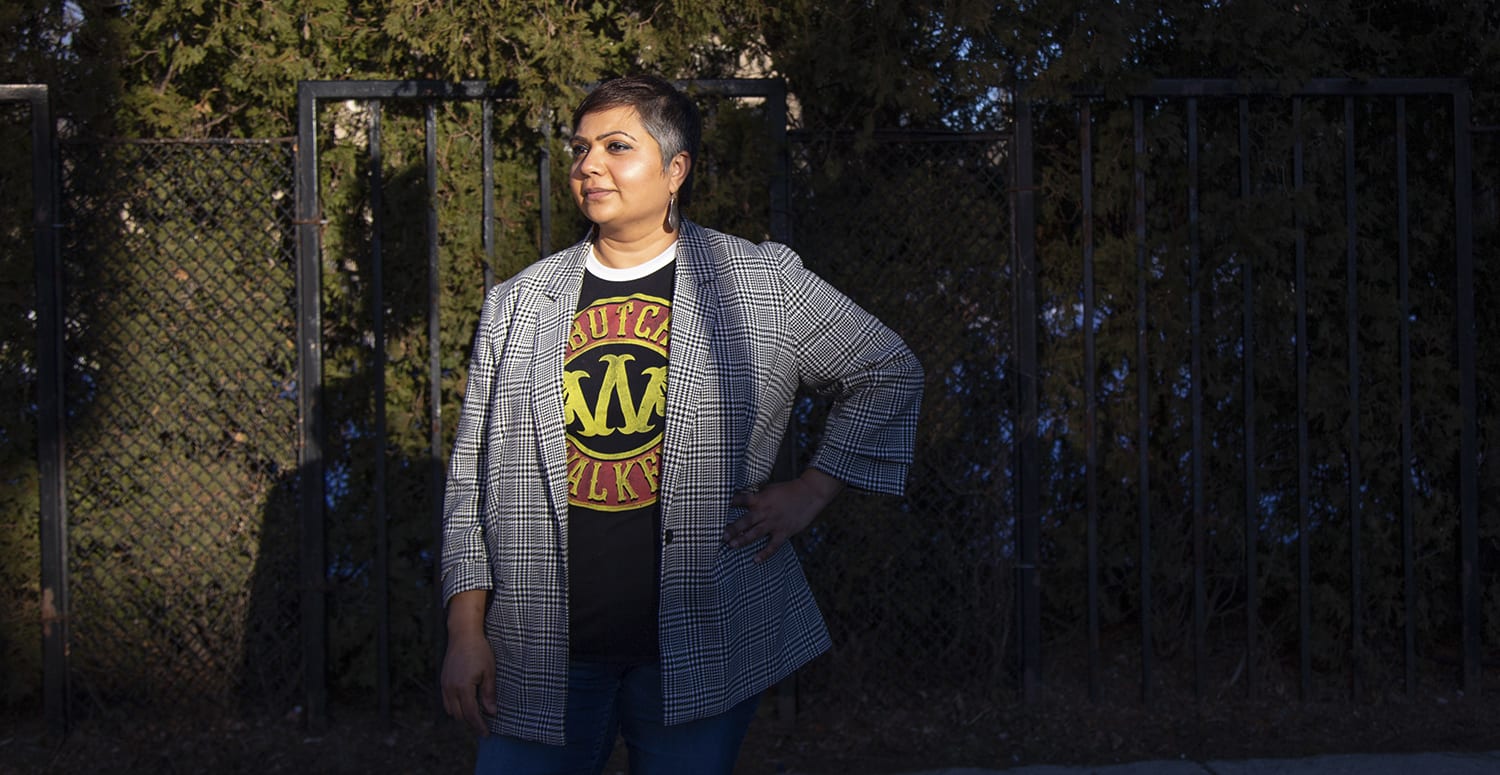 Fueled by a love of cooking and economic necessity, out-of-work chefs like Jasmine Sheth have launched restaurants without brick-and-mortar locations during the pandemic.

This story is part of a series on how immigrant business owners and workers of the bustling restaurant scene in Uptown have navigated the COVID-19 pandemic. It was produced in partnership with CatchLight Local and the Institute for Nonprofit News.

UPTOWN — Jasmine Sheth had looked forward to March 2020 for months.

As a chef and co-founder of the Chicago chapter of Queer Soup Night, an event series that provides a safe space for LGBTQ people and raises money for community organizations, Sheth and the volunteer team invested hours into planning the group’s one-year anniversary party.

But as the reality of the COVID-19 pandemic set in, the group postponed the event at the last minute. Less than a week later, Illinois’ stay-at-home order began.

For Sheth, the heartbreaks kept coming. First, her parents canceled a much-awaited visit from Mumbai. Soon after, she lost her job.

Sheltering in her Uptown apartment, Sheth soothed herself by cooking food she grew up eating, like kadhi, a chickpea yogurt soup her mom made, and rava idli, pillowy semolina cakes steamed in banana leaves.

It turned out to be the start of what became a business built for the pandemic — a scenario playing out in kitchens all over as emerging entrepreneurs pursue virtual restaurants that rely on delivery and pick-up orders instead of tables and servers.

Fueled by a love of cooking and economic necessity, out-of-work chefs like Sheth have launched restaurants without brick-and-mortar locations during the pandemic.

Often working alone or with a lean team, they’ve juggled every responsibility of running a business while creating unique foods from home or in rented commercial kitchens. Relying on social media and word-of-mouth, these digital restaurateurs have managed to build relationships with customers and support fellow food industry workers during an unstable time.

For Sheth, she needed to find work fast and wanted to contribute to social movements like Black Lives Matter. Pursuing her desire to share the complexity of Indian cuisine might allow her to do both.

“All those things spiraled into Tasting India,” she said.

Bolstered by encouraging responses to an Instagram post gauging interest in a weekly, Indian thali-style meal delivery series, Sheth launched Tasting India from her home in May to highlight India’s “lesser-known” regional cuisines. 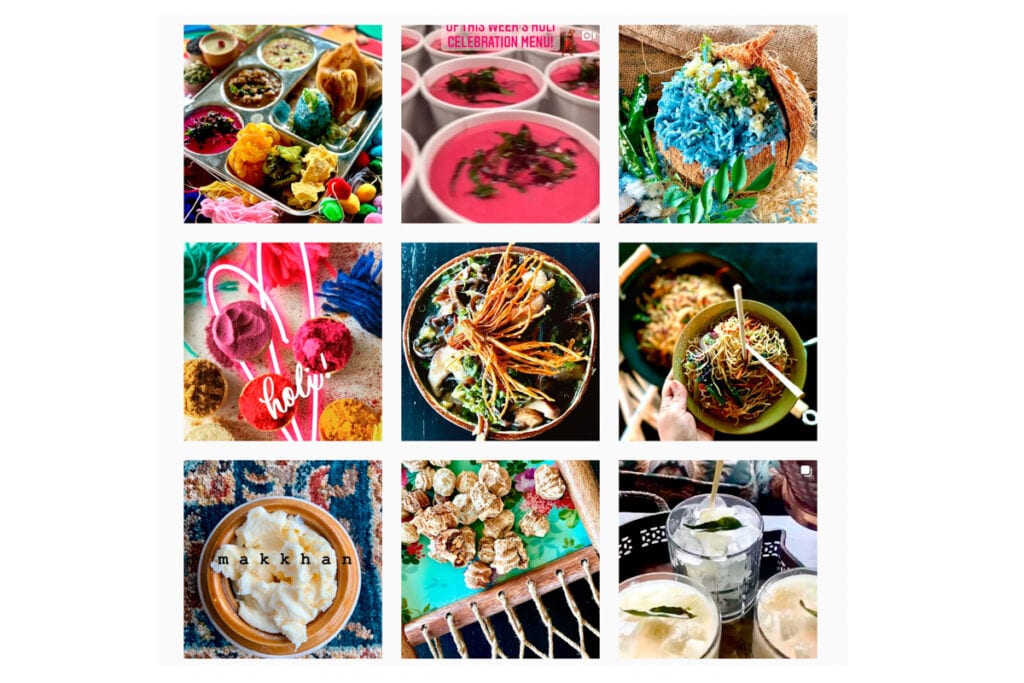 For the past 11 months, Sheth has created, cooked and delivered a new menu almost every week from her virtual restaurant. Hundreds of Chicagoans have ordered from more than 40 menus that focus on a different region, ethnic group or festival in India. Once Sheth releases the week’s menu on Instagram and in an email newsletter, customers can order through an online form that explains each dish in detail.

The menus began as odes to her childhood in India, filled with family trips across the country and within Mumbai. Specific memories inspire Sheth: feasts shared with family during Diwali, hakka noodles from a street vendor after clubbing “at a younger age,” chocolate cake made by a friend’s mom at a slumber party.

Sheth also wants to use her platform to educate followers about geographies, histories and cultures that the various dishes hold.

“It’s not just a fun way to share food with people,” she said. “There’s much more to a country’s culinary heritage than what you know about in your butter chicken or chicken tikka masalas.”

The final dishes reflect careful testing and hours of research — online and over FaceTime discussions with family, friends and their moms — personalized with Sheth’s twists. 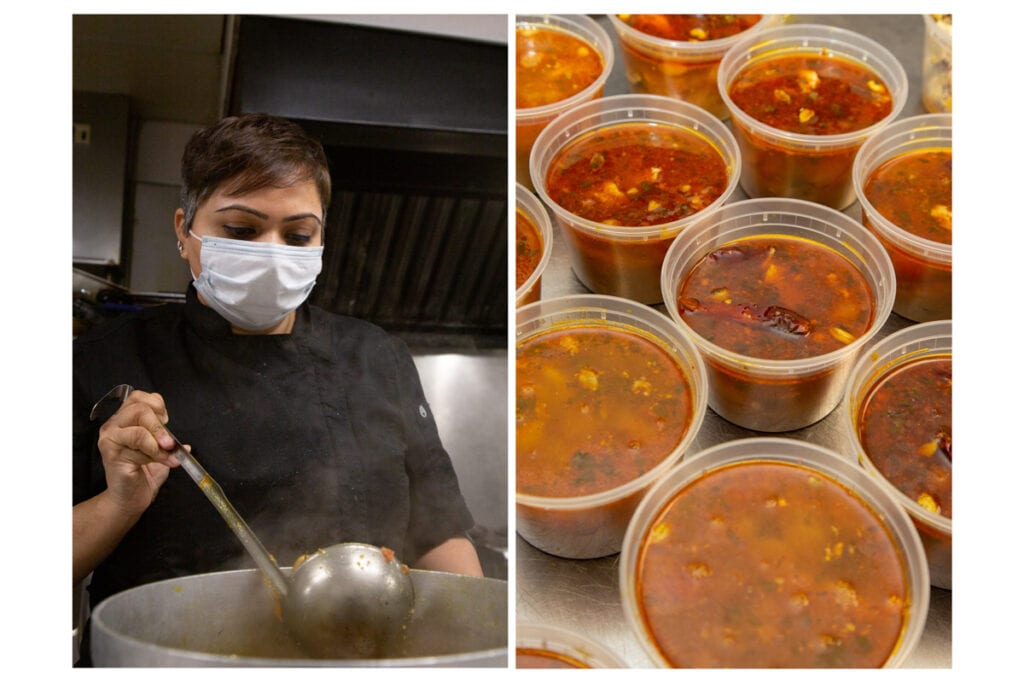 Chef Jasmine Sheth ladles naat kozhi rasam into rows of prepared containers. Right: The soup cools on the counter before getting packed with the rest of the week’s dishes. Sheth began as a one-woman band and now works with a team of part-time staff. (Photo: Woojae Julia Song for Block Club Chicago/CatchLight Local)

The pandemic made running a restaurant more feasible for Sheth and other chefs who began virtual operations. Commercial kitchens became affordable to rent, and delivery and takeout grew.

Over 75,000 restaurants or food businesses opened in the United States between March 2020 and 2021, according to Yelp. Delivery-only restaurants make up a growing sector of this industry.

“Everyone is just trying their best to navigate a lot of unknowns,” Sheth said. “People are just trying to keep their head above water.”

Sheth said it feels ironic that she started a restaurant during a pandemic, a challenging endeavor in any circumstance. Independent businesses like Tasting India don’t have the safety net big restaurant groups do, and most restaurants don’t become profitable within their first year. But despite the risks, Sheth says Tasting India allows her to cook and interact with customers more freely than in previous restaurant jobs.

“I can create on a constant basis,” she said. “It does take away some of the stability that most restaurants might enjoy by creating the same menu. But I think that’s a small price to pay.” 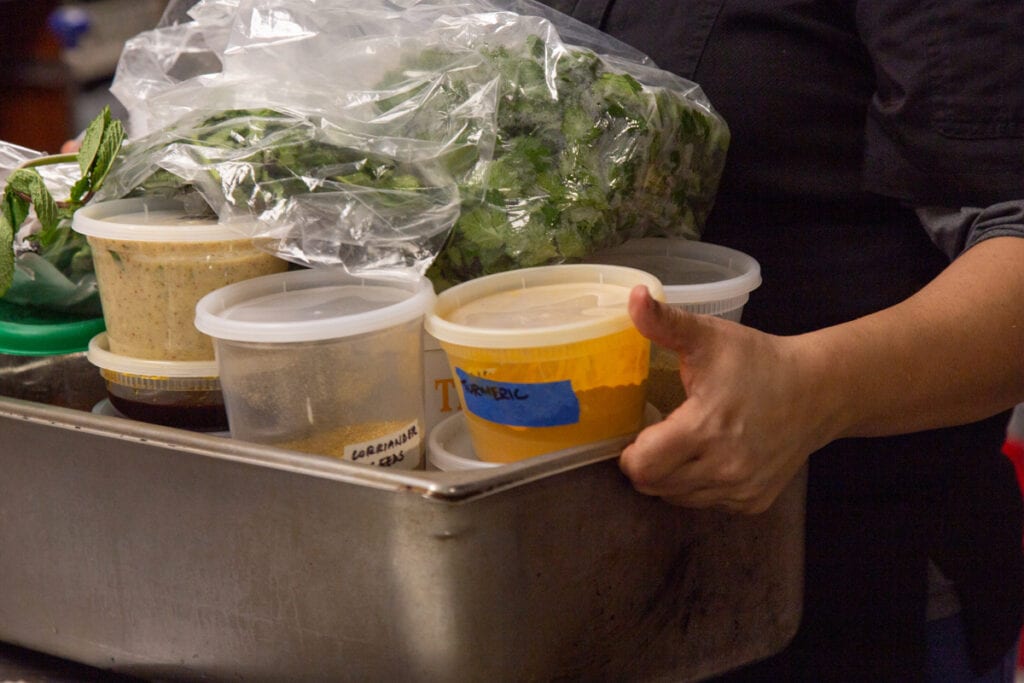 While Sheth feeds customers across Chicagoland, her restaurant is rooted in Uptown.

When Sheth moved to Chicago from New York City, she searched for a neighborhood with elements that reflected her previous home in Harlem: a sense of community, cultural diversity and great restaurants. She landed in Uptown almost immediately.

“The feeling of safety and belonging was very natural for me,” Sheth said. She loves living within walking distance of the neighborhood’s African and Vietnamese restaurants and the proximity to Little India in West Ridge.

Sheth’s week often includes a banh mi from Nhu Lan Bakery after a busy day or a walk to one of Uptown’s Asian supermarkets to grab ingredients for a Tasting India dish.

Hospitality On Hold: How One Timeless Uptown Diner Was Interrupted By The Pandemic

“Living in the neighborhood, to a large degree, influences my work as a chef. It provides me with an opportunity to support smaller, ethnic businesses,” she said.

Sheth’s business has grown steadily since her first week, when she sold about 20 orders, mostly to friends and former coworkers. Now, she sells out her menu in less than 24 hours. She plans to write a cookbook with her recipes.

“July … is when I started cooking full time and not doing another job. At the time, cooking was a side project, or a side business, rather,” she said. “Now, it’s definitely the main business.”

Sheth began the business as a one-woman band out of necessity, doing everything from menu planning and ingredient shopping to cooking in the commercial kitchen she rents in Andersonville and making deliveries. For the first few months, she would work until 3 or 4 a.m. all week. 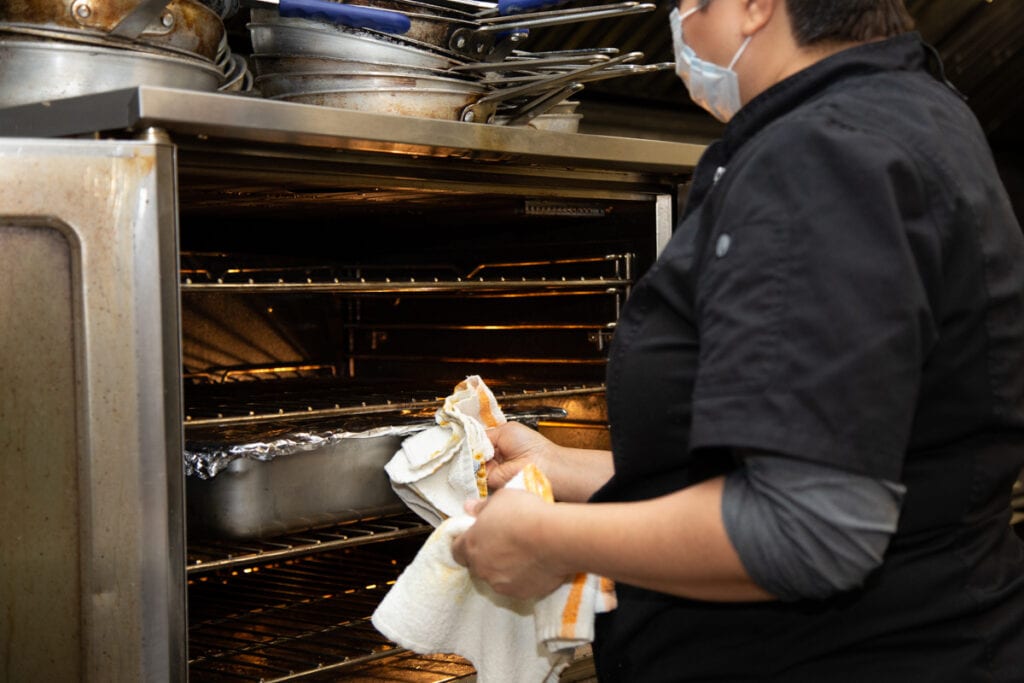 Chef Jasmine Sheth places a batch of mutton into the oven. After being cooked, the mutton gets incorporated into a Tamil Nadu-style mutton biryani, which Sheth said is a customer favorite. Photo: Woojae Julia Song for Block Club Chicago/CatchLight Local 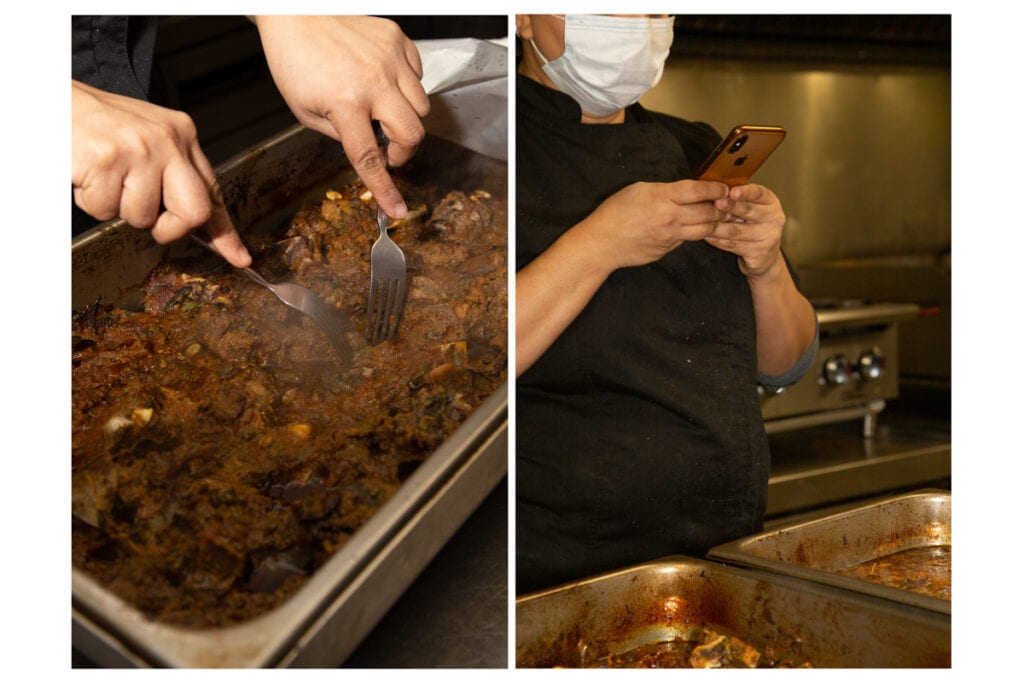 Sheth cuts into a steaming tray of mutton. Right: Sheth takes a video to share on her Instagram. She says that learning to promote her restaurant on social media has been key to sustaining the business and building relationships with customers. (Photo: Woojae Julia Song for Block Club Chicago/CatchLight Local)

“I’m the type of person that doesn’t like to ask for help, not because I’m too proud to ask,” she said. “I have this delusion about myself that I can do everything on my own.”

One customer ordered from Oak Brook before the chef realized how far away it was.

“It took me an hour and a half to get there, and I was like, ‘Damn it,’” she said. “I hate saying no to people, but I learned the tough way that I have to draw the line somewhere.”

Every week brings challenges as well as another chance for Sheth to fine-tune her routine. She’s learning to give herself more credit and accept help.

While her mother and other relatives provide culinary guidance from India, Sheth’s sister helps her through business logistics from New York and quality time during her work-related travels to Chicago.

“For most of us, people like me who are trying to drive their business on their own, I think the support of family and close ones are super important,” she said. 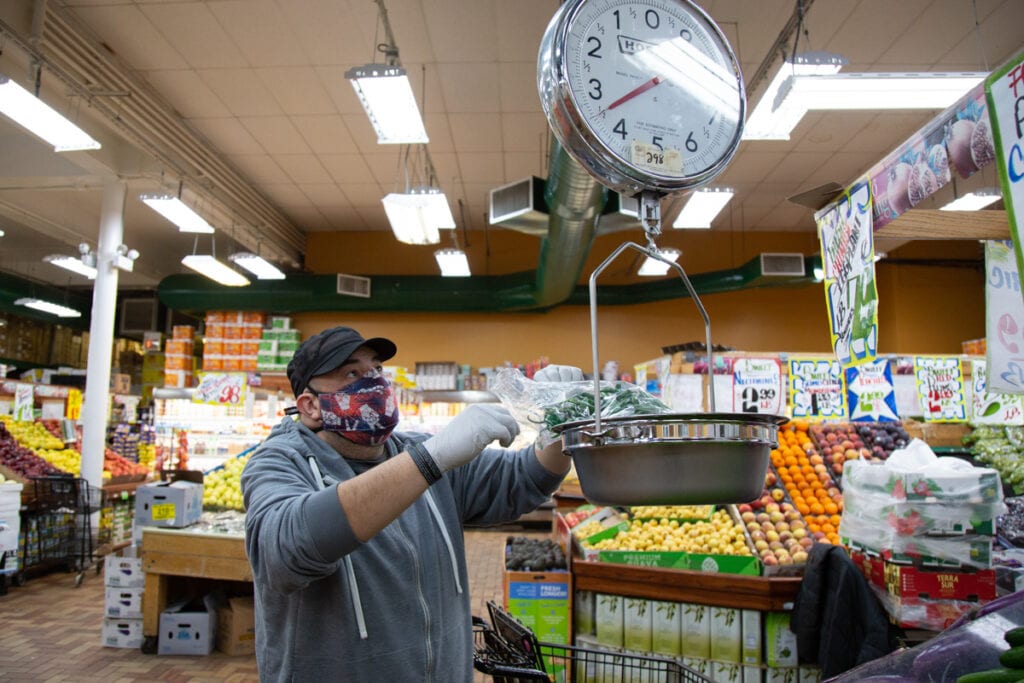 Jesús Pérez Jr. weighs a bag of peppers before placing it in his shopping cart. Perez, who has also worked for Instacart since the beginning of the COVID-19 pandemic, has learned to navigate grocery stores efficiently. (Photo: Woojae Julia Song for Block Club Chicago/CatchLight Local)

One member of her team is Jesús Pérez Jr. On Mondays, he goes to Restaurant Depot in North Park and Fresh Farms International Market to buy ingredients for Tasting India. He works as an Instacart shopper for most of the week, then helps Sheth package orders and makes deliveries across the city on Saturdays.

“As soon as everything changed, I had to change” my job, Pérez said. “ I had to think about my parents, especially my late father.”

He worked in Chicago restaurants for 13 years doing “everything you can think of” before turning to the gig economy a few years ago. For Pérez, who is immunocompromised and lives with parents who are immunocompromised, working with Tasting India since December has meant more stable, safer workdays in a week.

Many essential workers do not have the luxury of assessing health risks before taking a job, Pérez said.

“Whatever benefit you can get out of whatever you’re doing, is it worth the risk of getting infected or sick?” he said.

Pérez said working with Tasting India provided an opportunity to return to the service industry and do what he enjoys.

“I’ve always wanted to help people,” he said. “Being able to do no-contact delivery for the most part is ideal because of the pandemic.” 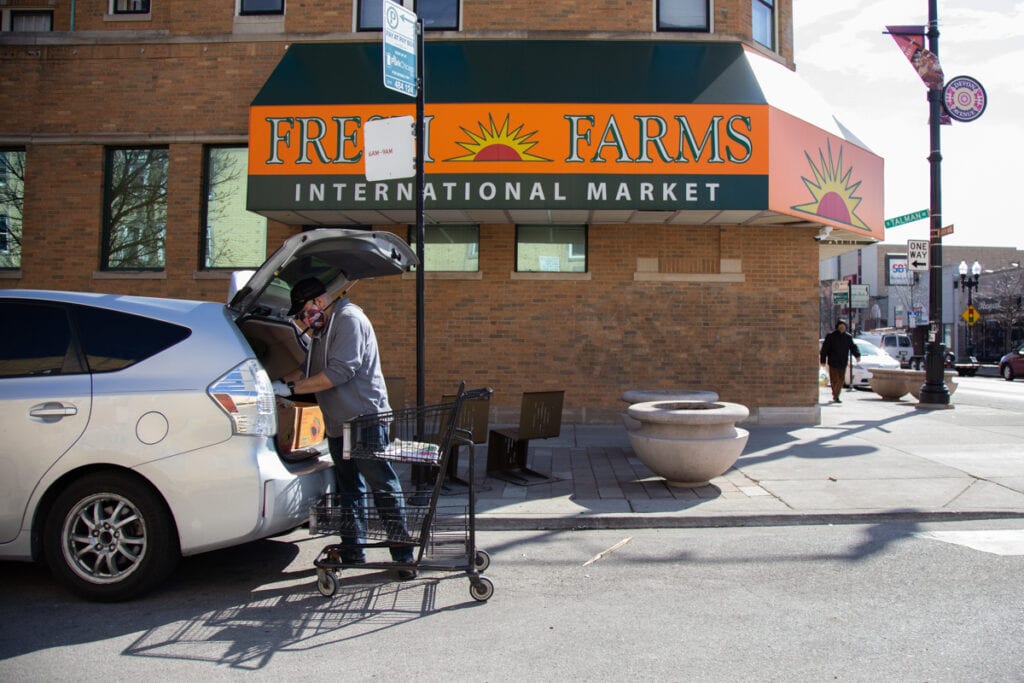 Outside a grocery store, Jesús Pérez Jr. loads his groceries into his trunk. He uses this car for his work with Tasting India, Instacart and, most recently, Amazon Flex. (Photo: Woojae Julia Song for Block Club Chicago/CatchLight Local)

Sheth said she’s survived by collaborating with and uplifting others through her food. Since the early weeks of Tasting India, she has donated proceeds to organizations, including Brave Space Alliance, the Okra Project and Trans Law Center; helped create care packages for frontline workers; and shared meals with the Community Kitchen, a mutual aid meal distribution project.

Sheth also partners with local entrepreneurs Smack Dab restaurant and Salt Spoon Bakehouse to sell retail items like her Cutting Masala Chai mix and a bagel inspired by thepla, a Gujarati flatbread. Learning to use social media intentionally has been key to building relationships with chefs and customers, she said.

“Given this pandemic and the challenges that it has posed for people financially, economically and personally, what better way to support each other than collaborate?” she said.

City officials have allowed restaurants to reopen gradually. Sheth will have to adapt her work as the restaurant industry works toward a post-COVID future. She said finding a different kitchen or expanding the business are good problems to have.

The restaurant and food industry needs to change significantly “for it to work for the people that actually helped build the industry,” she said.

“I don’t think there is one answer to that,” she said. “It will need to be something really drastic to change, to really see a different side of hospitality.” 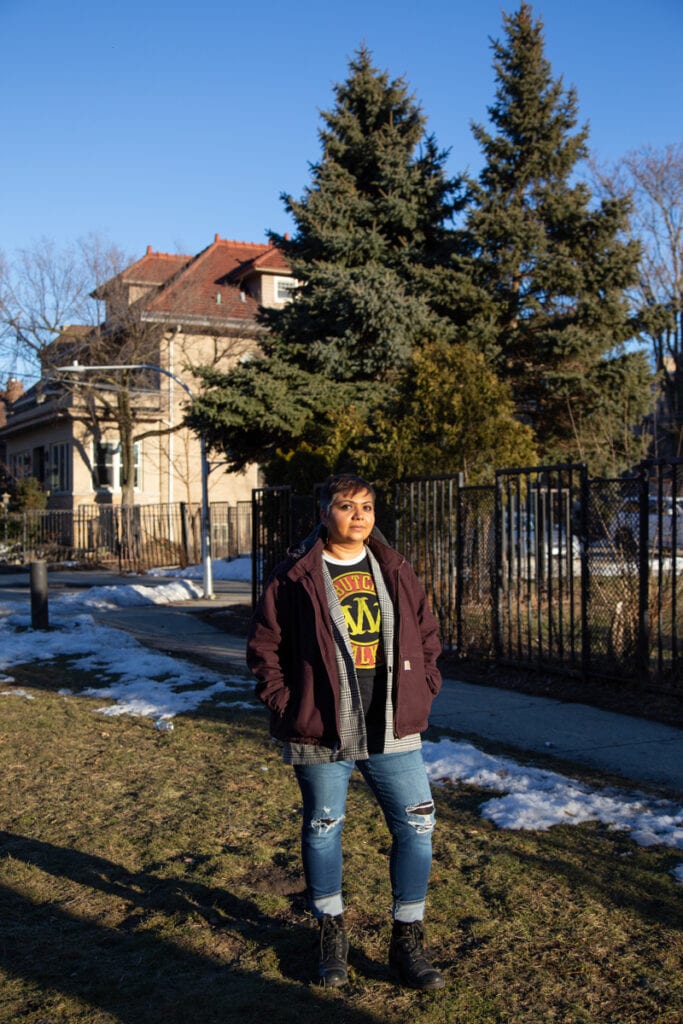 Jasmine Sheth, the chef and owner of the virtual restaurant Tasting India, poses for a portrait near her home in Uptown on March 1. Sheth has lived in Uptown since moving to Chicago in 2017. (Photo: Woojae Julia Song for Block Club Chicago/CatchLight Local)

Tasting India releases a new menu every Saturday at 6 p.m. Get updates on its Instagram page or sign up via email here.