The local mom’s group gave out over $50,000 in mutual aid assistance to Chicago families who were unable to get the COVID-19 federal stimulus check.

The local mom’s group gave out over $50,000 in mutual aid assistance to Chicago families who were unable to get the COVID-19 federal stimulus check.

When Adela and her husband got COVID back in April, she feared the worst. She sent her two children to stay with her parents so they wouldn’t get sick.

“We have had family members die from it,” said Adela, who asked to be identified by only her first name for privacy reasons. “Thank God we didn’t get it as bad as other people.”

Adela and her husband recovered from COVID, but their family’s troubles were far from over. Adela lost her job at the candy company she was working at and her husband lost his job as well.

“It is not easy finding work right now,” said Adela, who has been without a job since this summer. But after struggling to pay her bills for several months, help finally came to Adela this fall in the form of a grant from the Chicago Latina Moms’ Estamos Contigo mutual aid fund.

Chicago Latina Moms is one of over a dozen local groups running community mutual aid campaigns during the COVID-19 pandemic. These groups are stepping in to help people pay their rent, feed their families, and get basic necessities like clothes and diapers at a time when many are struggling.

But unlike many other mutual aid campaigns, CLM’s Estamos Contigo fund — Spanish for “We Are With You” — was designed to provide financial aid to families who had been excluded from the COVID federal stimulus check or unemployment benefits due to their immigration status. They raised $54,000, which they gave out to over 100 families in need in the Chicago area.

Latinx families have been hit hard during the pandemic, facing job losses, high death rates, and,  in some cases, limited government assistance. Nationally, Latinxs are nearly three times more likely to die and over four times more likely to be hospitalized with COVID-19 than white, non-Latinx persons. In Chicago, Latinxs account for nearly 36 percent of COVID-19 cases, despite making up just 28 percent of the city’s population.

Latinxs are also more likely than non-Latinxs to have lost a job or taken a pay cut due to the coronavirus pandemic, according to a Pew Research Center study from earlier this year. The unemployment rate for Latinxs hit nearly 13 percent in June and now sits at 8.4 percent.

Despite these challenges, mixed-status Latinx families in the Chicago area were unable to receive the federal stimulus check for COVID relief this year, which was the largest stimulus package in the history of the United States. Some 16.7 million people nationwide who are either non-citizens or have family members who are non-citizens were left out of the stimulus plan. Nearly half of that number were U.S.-born or naturalized citizens.

“The Latinx community, at every level, is getting hit really hard by COVID,” says Isabel Gonzalez-Smith, founder and executive director of Chicago Latina Moms. “People who are undocumented were intentionally excluded from stimulus checks. I don’t know how much more unjust that can be when you have a community that is struggling so bad and there is no protection.”

Gonzalez-Smith says that it was seeing those struggles that inspired her to start CLM’s mutual aid fund this August.

“It’s up to us to step up and help our people out. To say we are with you, estamos contigo,” said Gonzalez-Smith.

CLM’s mutual aid fund is an extension of the organization’s work building a supportive community for Latina moms. Gonzalez-Smith founded CLM in 2014 when she was pregnant with her first son and was struggling to find a community of like-minded mothers. In her search for moms groups, she saw how often pregnancy amongst the Latinx population is tied to negative stigmas, like teen pregnancy, homelessness and domestic violence.

“I wanted a space where moms could connect and see each other for who they are and not have to explain themselves. A space for them to grow together and share together,” said Gonzalez-Smith.

Today CLM has over 3,000 members, reaching out into the nearby suburbs.

When COVID hit, the organization began providing support to moms virtually and tried to help members navigate the early months of the pandemic through things like meditation and yoga sessions. But as the pandemic continued, they saw how gravely the Latinx community was being hit and how the immigrant community was intentionally being excluded from receiving aid.

“COVID magnified existing issues that the Latinx community was already facing,” says Gonzalez-Smith. “So if there were issues about immigration status, they were even further complicated.”

Gardenia Rangel-Meza, president of the board of directors for CLM, said that the whole situation tugged at her heartstrings.

“They are our most vulnerable. These are the folks who have the essential jobs. These are our nurses, our healthcare providers, our custodial staff, the people who bag our groceries. How can this huge population be excluded?” said Rangel-Meza. 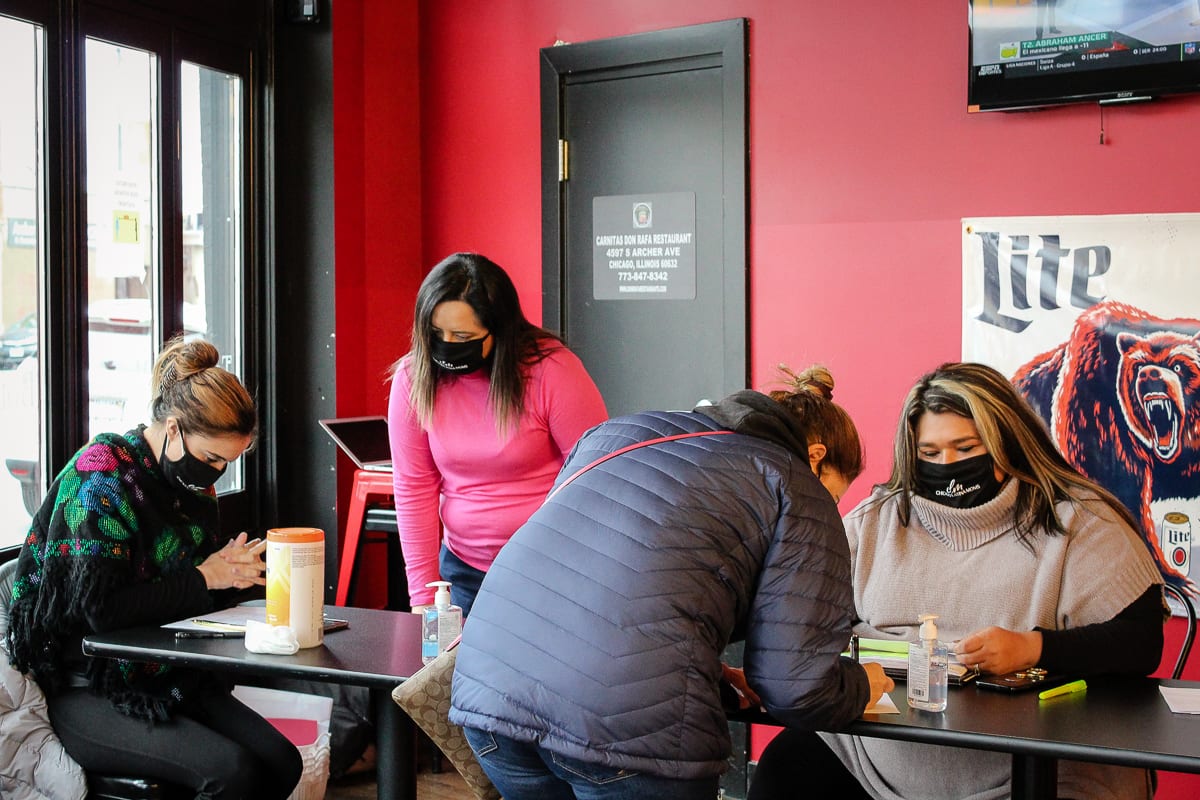 Gonzalez-Smith brought the idea of launching a mutual aid fund to CLM’s board. From there “Estamos Contigo” was born.

CLM sent out press releases but weren’t able to draw media attention for the fundraiser. However, their community stepped in to help raise the money.

“This goes to show that the community is so active and connected and so passionate,” says Gonzalez-Smith. “Over 70 percent of the donations have come in from moms in the community who reached out to their network and advocated with so much passion.”

One of those moms was Vanessa Mendoza, a mother of two and a special education pre-K teacher.

“I made it a goal of mine to raise $5,000 and every day I kinda stalked everybody on Facebook,” said Mendoza. She ended up raising the full $5,000.

For her, the fundraiser was about hope.

“One day for me, the next day for you is the way I looked at it. We are all in some kind of bind at some point in our lives and you never know who needs the help,” said Mendoza. “I know it has hit my community hard and so I had to do something.”

Applications to receive the grant opened online on Aug. 11 and were only active for 24 hours. In those 24 hours, CLM received over 400 applications, which didn’t surprise Gonzalez-Smith. “I knew that the need would be great,” she said.

After spending several weeks reviewing the applications, CLM chose 108 families to receive $500 grants. The organization started awarding the grants the weekend of Nov. 13, and, in order to help maintain social distancing, CLM set up five locations in the Chicagoland area to distribute the checks.

On Nov. 14, one of their stops was Carnitas Don Rafa, a Mexican restaurant in Chicago’s Brighton Park neighborhood.

One of the recipients that day was Adela.

“The money is heaven sent,” said Adela. “I have been without work for almost five months and now everything is going to shut down again.”

Adela said that she will be using her grant to pay her gas, electricity and phone bills.

Also receiving money that day was Paula, a mother of four daughters all under the age of six. Paula’s husband lost his job due to COVID and the family has been struggling to pay their rent ever since.

“That’s what we will be using the money for, to not be left without a home,” said Paula, who asked that we only use her first name. “Eating, well that’s a little different, but losing our home, with kids, what would we do? That’s what we don’t want to happen.”

Seeing the families pick up their grants made CLM’s Rangel-Meza proud of their fundraising efforts. But she knows that the need for help will continue as the pandemic doesn’t show signs of ceasing anytime soon.

“We offer these microgrants but it is not enough, it is just not enough,” Rangel-Meza said through tears. “I hope that others can replicate this because they can make a difference.”