Academic and activist Carmen Geha explains Lebanon’s economic meltdown and how the Lebanese diaspora has taken up the call for revolution. 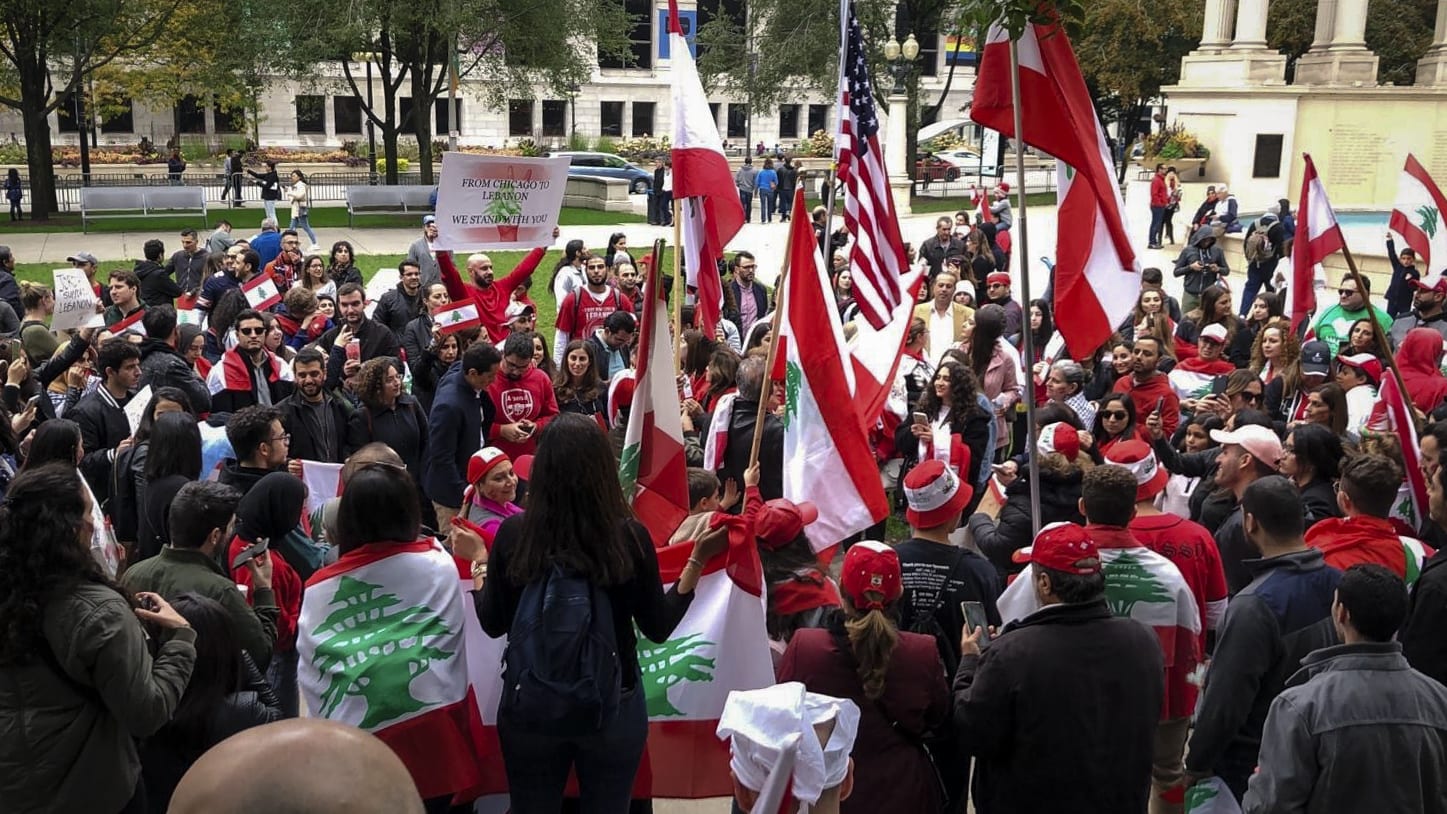 Academic and activist Carmen Geha explains Lebanon’s economic meltdown and how the Lebanese diaspora has taken up the call for revolution.

Above: Over one hundred people gathered in solidarity with Lebanon in Millenium Park Oct. 20, 2019 in Chicago, Ill. Diane Bou Khalil/Borderless Magazine

Two explosions rocked Lebanon’s capital of Beirut today killing at least 30 people and injuring 2,500, according to reports from the New York Times and the Lebanese health minister. The blasts shook the country, which is in the midst of a political and economic crisis.

Electricity is restricted to only a few hours a day in Lebanon, the streets are overflowing with garbage, and the unemployment rate is 35 percent. With hyperinflation, the Lebanese pound has lost over 80 percent of its value since the country’s October 17 revolution, causing food prices to skyrocket.

The revolution, or “Thawra,” began as civil protests against planned taxes on gasoline, WhatsApp, and tobacco last fall. As protests grew, banks began restricting the withdrawals of U.S. dollars and the local currency took a downturn.

Borderless Magazine’s Diane Bou Khalil spoke to Carmen Geha, an activist and associate professor at the American University of Beirut in Lebanon, about the country’s current crisis.

This interview was originally broadcasted on our YouTube channel and has been condensed for print.

Borderless Magazine: Can you explain the crisis happening in Lebanon?

This is a country where young people are getting arrested and beaten up for a Twitter criticism of the Lebanese currency or the president. The politicians used to at least pay lip service to reform and international statutes. If you look at the narrative and the rhetoric now, they don’t care, and the world knows they don’t care. We will not watch them take us hostage.

Borderless Magazine: Many in and outside Lebanon are calling for government reform and many are scared of a war. What are Lebanese thinking about today?

Carmen Geha: We are stuck in a puzzle. We cannot escape economic depression and economic collapse without political reform. The system does not enable political reform. I do not believe you can fix public institutions without having good politicians and the will to fix them. If politicians fix the government, they will not be in power, because they live off of clientelism, making people afraid and threatening to use weapons. It is a country where people are afraid of them. 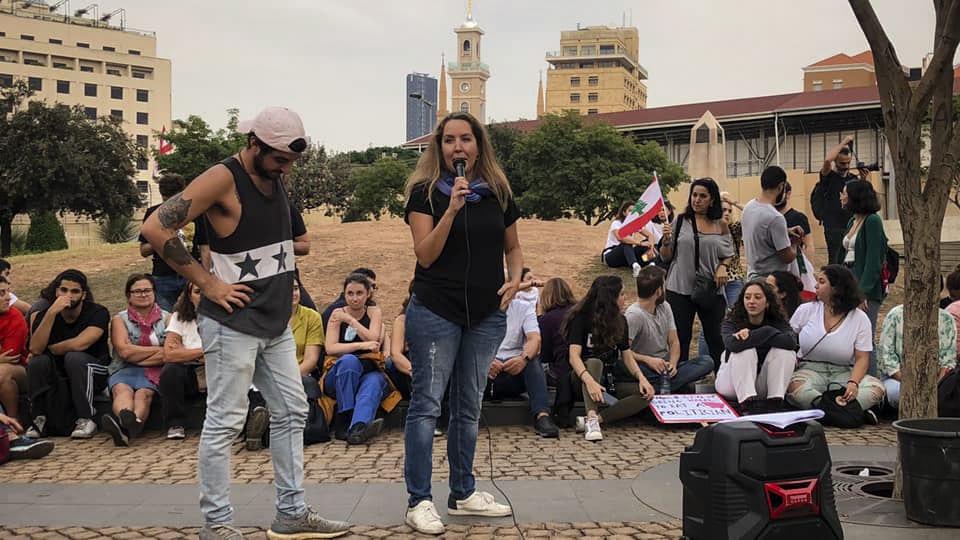 Carmen Geha speaks on electoral reform Oct. 27, 2019 in Beirut, Lebanon during an initiative called badna nthour badna na3ref, which means “we want to revolt, we want to know.” The initiative used the streets to organize around key political issues. Photo courtesy of Carmen Geha

We can’t wait for political reform. Most people cannot feed their kids at the end of the month. I think we need to take a step back and really respond to what is quickly emerging as a humanitarian crisis not just for Lebanese but for a lot of non-Lebanese, too. For 1 million Syrians, half a million Palestinians, and a lot of migrant workers [who live in Lebanon]. People are getting thrown off of the street and we need to start addressing that crisis.

Borderless Magazine: Lebanon is also home to 900,000 Syrian refugees and 475,000 Palestinian refugees. How are refugees in Lebanon surviving during this time?

Carmen Geha: Seventy-five percent of residents, citizens, and non-citizens are living underneath the poverty line. That is less than enough to feed their kids. The general picture is grim and violent, but the majority of people have a long history in building solidarity and building enterprises together. Any neighborhood in Lebanon today has a food bank, someone is collecting food, money, clothes.

[However,] we cannot rely on local help. We need international organizations to give the Lebanese a chance not to be held hostage by these bad politicians. I also think the diaspora has a big role to play not just in financing but keeping Lebanon on the political map. It is important that we do not slip into a failed state. It is very important for people to not pay the price of bad politics.

Borderless Magazine: The situation in Lebanon has become a global issue, with solidarity protests breaking out all over the world including two that happened here in Chicago. Why have members of the Lebanese diaspora taken action on this issue?

Carmen Geha: Young people care for their country. Lots of people have left Lebanon not by their own will but because they had to, even those who left a long time ago. The majority of the Lebanese have a good memory of their country and want to give back, but there’s no trust in the government. 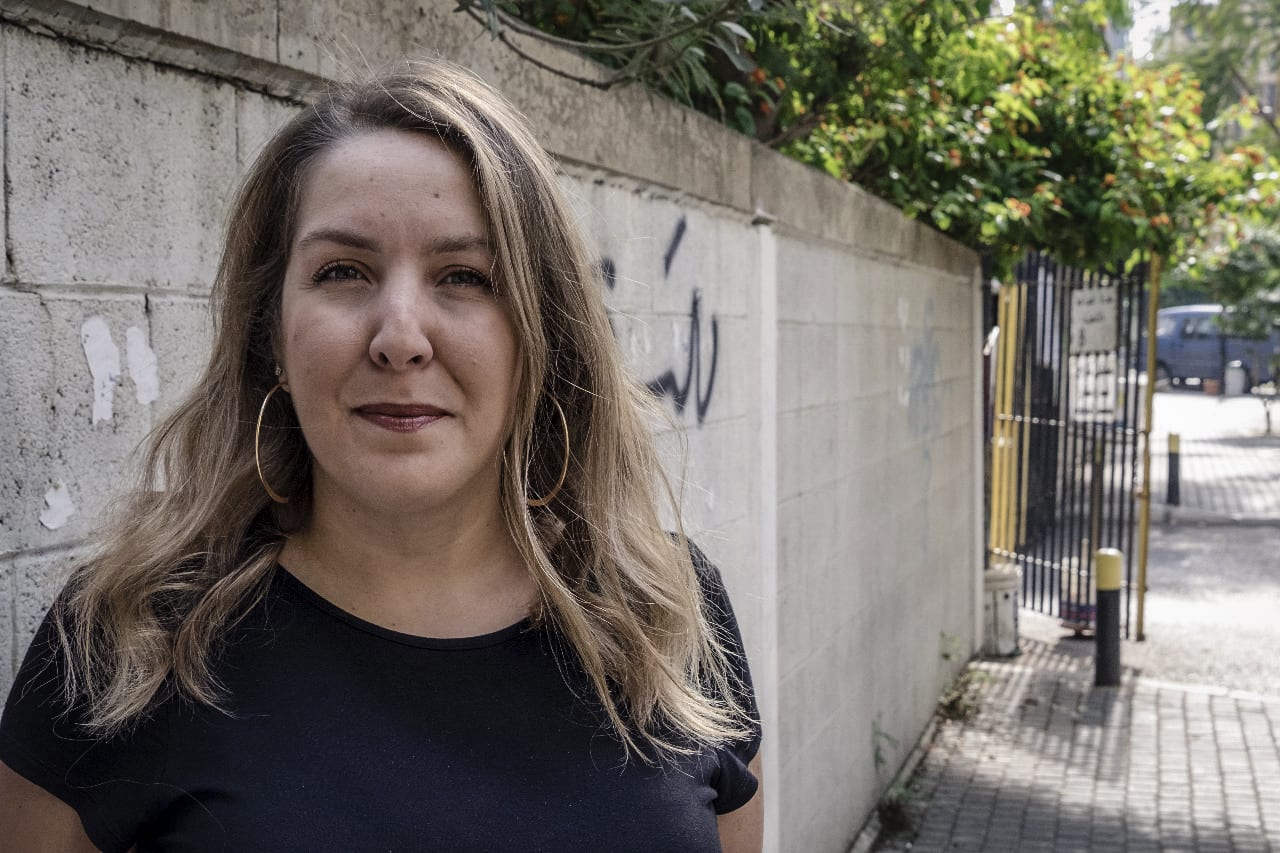 When the diaspora saw that the Lebanese people were chanting “Kellon ya3ne kellon,” which means “All of them means all of them,” at the protests, it was a spark of hope. It is up to the Lebanese both inside and outside to keep the spark alive.

Borderless Magazine: In the midst of the crisis in Lebanon, you are also dealing with the COVID-19 pandemic. How has the country been handling that?

The numbers have been relatively low because of low testing capacity, but there is a general feeling that we did OK in the first wave.

When we don’t have electricity at night in hospitals, there is trash on the streets and little kids are running around the house hungry, I am very pessimistic about the second wave. I think it’s the last thing that pulls us under. We all have responsibility, especially those who are more privileged to have the chance to raise our voice or support in any way possible, to avoid a scenario where Lebanon slips into a failed case disaster.

Borderless Magazine: What are your thoughts on the societal issues and gender issues being raised in this revolution?

Carmen Geha: I wish you were here to see it. When there is a collective action of this magnitude you feel like everything is on the table. The things you wouldn’t normally discuss, the people you normally wouldn’t see are now having discussions and are on the table because there is this general euphoric thing that combines us. So the things that we perhaps used to argue about, for example, gender issues, are now finally on the table. Because the movement is not hierarchical and top-down, it was more possible for women to be at the forefront.

On gender issues, I am going to repeat something I always say: Women stand to lose the most if the system continues and they stand to win the most if it is reformed. Of course, men also live in poverty and corruption. But the deal that was made after the civil war allowed a group of warlords to design a system that puts their interests first. Whether it’s in civil status, marriage, rape, inheritance, economy, wages, procurement, or even trade. Women couldn’t trade on their own until 1994. They have been able to infiltrate all these various sectors and aspects of women’s lives and that is why women — whether she was a daughter, mother, sister, activist, LGBTQ activist or however you want to look at the Lebanese woman — it was normal for her to be at the forefront [of the revolution].

It really takes time. Six to eight months is nothing in political life. Take 2005 as a milestone when the Syrian occupation left and now that we are facing our own corrupt politicians. We are now just starting. We just uncovered these issues and put them on the table. I am hopeful.

Borderless Magazine: What are you most hopeful about during this chaotic time?

Carmen Geha: I am a university professor and I am hopeful about young people everywhere because they do not have the scars of my generation or the generations before. There are not the same taboos, fears, or concerns like we had. I look at my students and they do not understand why they cannot marry the person they love unless they go to Cyprus to marry because civil marriage is not legal in Lebanon. So I am most hopeful about my students and young people everywhere.