We answer your questions about thorium and health hazards related to the Rare Earths Facility. 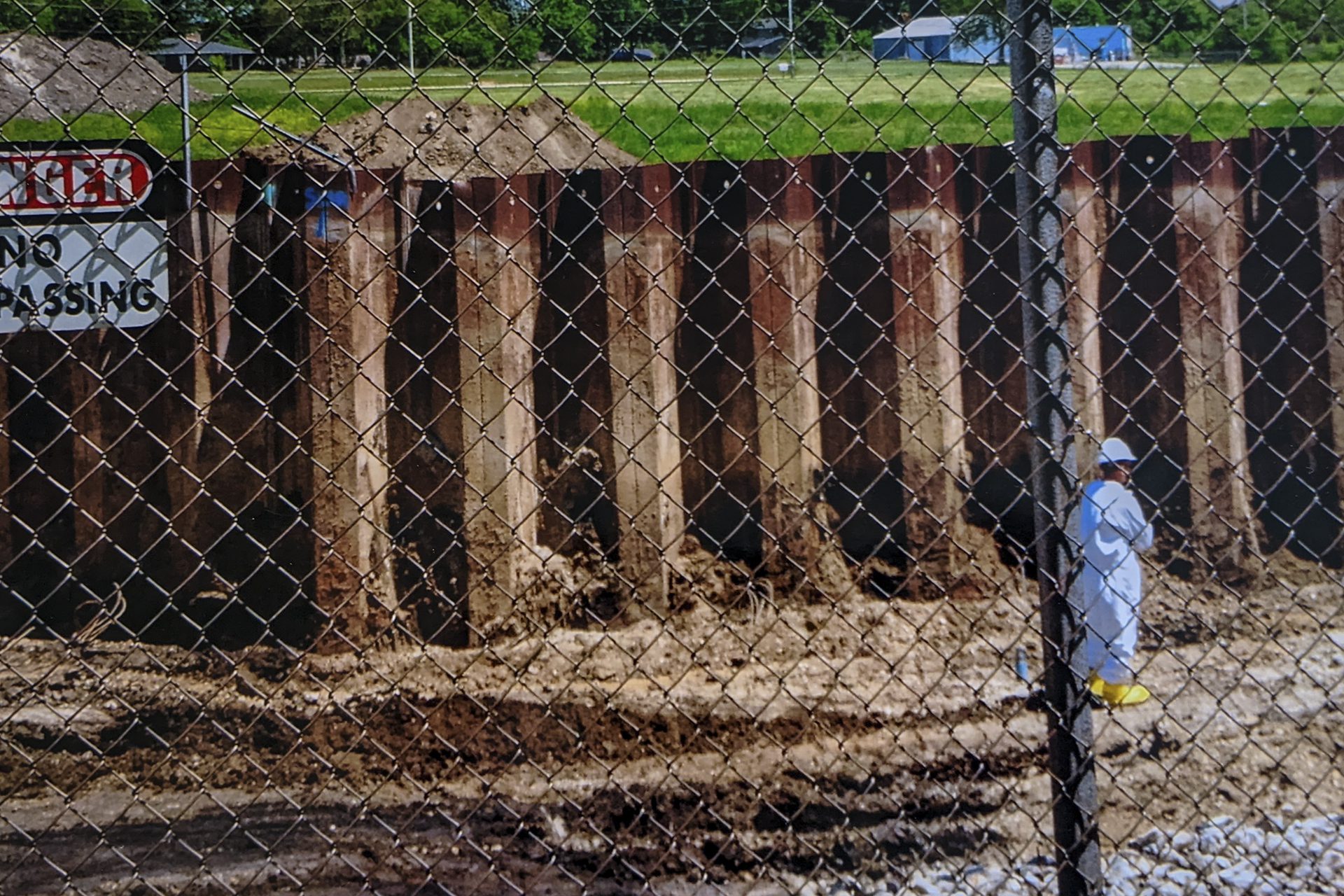 We answer your questions about thorium and health hazards related to the Rare Earths Facility.

This fall, Illinois will begin the final cleanup of West Chicago’s notorious Rare Earths Facility, once the largest producer of radioactive thorium in the world. The Illinois Emergency Management Agency plans to clean up contaminated groundwater beneath the old factory site.

The latest cleanup comes after decades of remediation and radiation cleanup in West Chicago. Previously, certain residential areas, Reed-Keppler Park, Kress Creek and the West Chicago Sewage Treatment Plant were designated as national Superfund sites because of extensive contamination from thorium processing at the Rare Earths Facility, also known as the Kerr-McGee factory. Reed-Keppler Park and the Sewage Treatment Plant were removed from the Superfund National Priorities List after the completion of cleanup operations. The EPA anticipates that the residential areas and Kress Creek will be delisted in the next few years.

Here are answers to some commonly asked questions about current and past remediation efforts:

What was in the contaminated material that many residential areas received?

While thorium-232 was the primary pollutant, the element breaks down into radium and then radon gas, which all emit radiation that can be harmful at concentrated levels. The U.S. Environmental Protection Agency used radium in the soil, present at constant levels with other elements along the decay chain but more radioactive, to detect factory-related contamination.

Heavy metal contamination — including barium, chromium — and lead, was found on the factory site along with the radioactive materials. However, the levels did not reach the threshold required for cleanup on residential properties.

When and how did the government test for contamination related to the Kerr-McGee factory?

The Nuclear Regulatory Commission began aerial surveys of the factory area for radiation starting in 1976. In the late 1980s, the EPA began more detailed ground-level studies that included scanner vans and neighborhood walkovers with radiation detectors to identify potentially contaminated properties. The agency further surveyed these properties at five-foot intervals for gamma radiation and took soil and indoor radon samples.

Radon is a radioactive gas that has been found in homes across the United States. Tests are recommended, but not required, for real estate purchases. The EPA did find elevated radon at some properties, but they attributed it to the breakdown of naturally-occuring uranium, since it was not the type that comes from thorium decay. After initial testing, the agency didn’t use radon to further screen for factory-related contamination.

What happened during the cleanup?

For residential properties, any soil with more than 7.2 picocuries per gram of radium (which is 5 pCi/g above average naturally-occurring levels) was removed and eventually shipped to a hazardous waste disposal facility in Utah. The areas were then backfilled with clean soil.

Cleanup of 670 residential properties finished by 2003. However, in 2007 the EPA reviewed homes that Kerr-McGee remediated in the 1980s, and determined that 13 properties had contamination above agency standards and needed further remediation. Those homes were cleaned up by 2015. 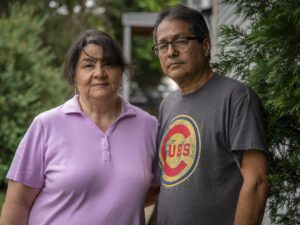 Jonathan Aguilar/Borderless Magazine
Sandra and Jesse Arzola in front of Sandra's family’s house in West Chicago, Ill., Saturday, June 25, 2022. The couple lived with Sandra’s family in West Chicago during the 1990s when the city was cleaning up radioactive waste left behind by an old factory last owned by the Kerr-McGee Chemical Corporation. Jonathan Aguilar/Borderless Magazine

Will there be more testing?

According to the EPA, further testing is not required at residential properties because the agency and state have already done verification testing to ensure that cleanup standards were met.

Could there be remaining pollutants that weren’t found earlier, but may now be detectable because of radioactive decay?

It takes 14 billion years for thorium-232 to lose half of its radioactivity. As it slowly breaks down, its radioactive byproducts go through much shorter decay processes, in the span of years, days and even seconds.

These byproducts, including radium and radon, are expected to exist at constant levels along with the thorium throughout its extremely long half-life. In other words, testing would have picked up any factory-related pollution posing a current or future risk. The EPA does not expect that any new hazards will emerge because of previous remediation efforts.

Why are they doing the groundwater remediation now?

The soil around the factory, which was the source of contamination, had to be addressed before groundwater remediation could take place, according to the Illinois Emergency Management Agency. Soil remediation finished in 2015. However, the sheet piling that was initially installed to protect workers excavating contaminated soil now traps residual contaminants, preventing the groundwater from naturally diluting them over time.

Though the factory groundwater pollutants exceed protection standards, it is not dangerous to human health unless ingested, according to IEMA’s Branch Chief of Radiation Protection Services, Kelly Horn. The groundwater is too far below ground to emit radiation that could reach residents.

Using nearly all of the remaining $36 million allotted for cleanup, the agency plans to reduce contaminants as close to state protection standards as possible, but Horn said the agency doesn’t have enough money in its budget to reach those standards. Any remaining pollutants should not be a concern because of procedures in place preventing people from using the contaminated groundwater. These contaminants are expected to dilute over time.

What will the final stage of groundwater remediation involve?

IEMA’s plan involves three steps. First, they will treat parts of the ground by pumping a chemical solution to dissolve the residual radioactive materials and remove them. This soil was already cleaned by Kerr-McGee to government standards. Although the fine particles of radioactive material were removed, the remaining rocks still contain trace levels of uranium that could leach into the groundwater and concentrate there.

After treating these rocks, they will pump out contaminated groundwater across an area of 10 acres of the 43-acre factory site, and then they will treat the water. Finally, they will remove the sheet piling and allow natural groundwater flow to dilute any remaining contaminants.

Has the groundwater contamination under the factory impacted the city water supply?

The city’s drinking water is not impacted by factory contamination, said Horn. The city draws water from several deep and shallow aquifers. The deep aquifers are well below the depth of the groundwater contamination at the factory, while the shallow ones are at least a mile away from the factory and in a different groundwater flow path.

There is “no connectivity,” Horn said, between the city’s water sources and the factory’s contaminated water. He also noted that groundwater contamination beneath the factory is very localized, extending at most 700 feet beyond the factory perimeter.

Some residents have raised concerns about previous testing that has found that radium counts in the city water exceed EPA standards. These counts are the result of natural radium deposits in deep aquifers, said Horn.

The city’s water treatment plant, which includes treatments to reduce radium, went online in 2005. In 2021, the most recent test for radiological contaminants, which are required every three years, met EPA standards. The latest water quality report is available here.

What about private wells?

The last properties near the factory with private wells were moved to city water in 2015.

“There was no detectable contamination in any of the monitoring wells west of the factory [where these properties are located],” Horn said. “We did it as a precaution, another layer of insurance.”

There are currently no potable drinking water wells in the area of concern around the factory. IEMA plans to do an additional well survey “to make sure nothing is slipping through the cracks,” Horn said.

Current city ordinances prevent new wells from being drilled in the area.

How do I find the results of past remediation scans of my property and whether my property was remediated?

West Chicago residents who want to know the results of EPA testing or remediation on their property can contact EPA’s Rachel Linduska at (312)-886-6806 or email Kelly Poulos at [email protected].

The West Chicago Public Library also houses an archive of government records related to the Superfund cleanup that anyone can access by going to their building.

Have a story about West Chicago that you want to share? E-mail us at [email protected].

This reporting was supported by the International Women’s Media Foundation’s Howard G. Buffett Fund for Women Journalists and an award from the Institute for Journalism and Natural Resources.