McHenry County Will Not Get to Keep Holding ICE Detainees, Chairman Says

The decision comes after the Illinois county fought to keep its contract with the federal immigration organization. 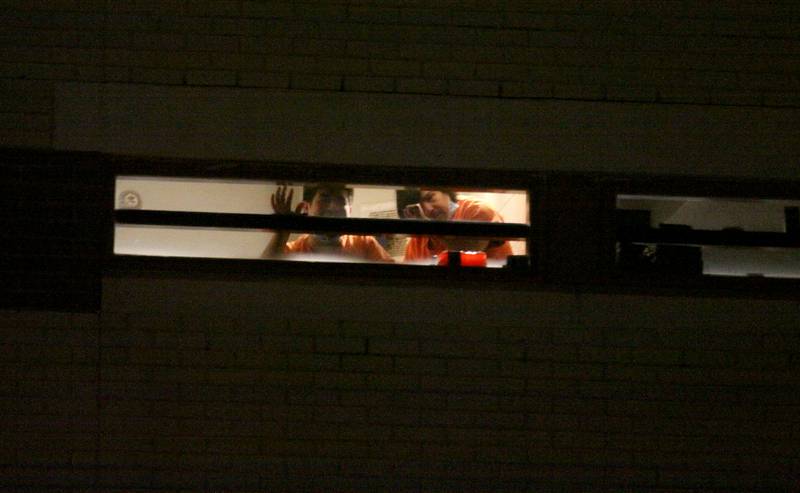 Patrick Kunzer for Shaw Local
Inmates watch as activists held a candlelight march to the front of the McHenry County Correctional Facility the evening of Wednesday, Dec. 29, 2021. The event was arranged by the Coalition to Cancel the ICE Contract in McHenry County.
By Ben Szalinski and Emily K. ColemanJanuary 14, 2022February 2nd, 2022Immigration Policy, Trending

The decision comes after the Illinois county fought to keep its contract with the federal immigration organization.

McHenry County will have to cancel its contract with the federal government to house federal immigration detainees, the McHenry County Board chairman said Thursday.

A 7th U.S. Circuit Court of Appeals three-judge panel issued a stay on Dec. 30, pushing back the deadline McHenry and Kankakee counties have to end their contracts to house U.S. Immigration and Customs Enforcement detainees to Thursday.

“We conclude that the counties have not made a ‘strong showing’ that they are likely to succeed on the merits,” circuit judges David F. Hamilton, Michael B. Brennan and Thomas L. Kirsch II said in the order Wednesday.

McHenry and Kankakee counties, which had filed the September lawsuit, did not demonstrate a likelihood that the district court erred in its decision to dismiss the lawsuit last month or that they are threatened with “imminent irreparable harm.”

“The counties have not shown that they will lose substantial revenue absent an injunction or that this loss of revenue is permanent. Illinois’ public interest in enforcing its statute weighs against an injunction pending appeal,” the appellate judges said.

U.S. District Court Judge Philip G. Reinhard, the judge who dismissed the lawsuit early last month, said in his opinion that the state has the authority to determine whether it — or any of its political subdivisions, including counties — can enter into or remain in cooperative agreements such as the one with ICE.

The decision Wednesday meant the Illinois Way Forward Act took effect at noon Thursday, including a provision that prohibits counties from entering into contracts to house immigration detainees and requires existing contracts to have ended by Jan. 1.

“It made my day,” said Amanda Garcia, a Crystal Lake resident and immigration attorney. “I was so happy to see that order. Just reading it felt very affirming that everything the community has been saying and worked toward for many years is finally happening. This community, this county will be better for everyone.”

McHenry County’s contract requires 30 days’ written notice to allow Immigration and Customs Enforcement time to remove detainees from the jail’s custody, which means the soonest ICE detainees now would be removed from the jail is mid-February.

The county notified ICE of the judges’ decision and the 30-day clock for ICE to remove its detainees started Thursday, Buehler said.

As of Thursday, there were 46 ICE detainees in the McHenry County Jail, down from 59 on Dec. 30, according to county spokespeople.

Buehler, R-Crystal Lake, and McHenry County State’s Attorney Patrick Kenneally had criticized the Illinois Way Forward Act. Buehler called it “an unconstitutional and poorly thought out law that was hastily thrown together by the GeneralAssembly to make a political statement regarding current federal immigration enforcement” in a statement following the December stay.

“The forced termination of the contract will not mean that ICE will be releasing its detainees from the county jail; they will be relocated to facilities in other states, which will force families of detainees to travel much farther to visit while their loved ones await their hearings,” the county said in a statement at the time. “Also, the loss of revenue from the contract will hurt residents countywide in the form of diminished services or potential tax increases in future years.”

The Northwest Herald inquired Thursday with what the decision means for the county’s plans regarding the lawsuit and had not heard back.

McHenry County Board member Carlos Acosta said he originally was OK with the McHenry County Jail housing ICE detainees when the program started about 20 years ago. But his support waned as it continued and became more “opaque” as he struggled to get information about the number of ICE detainees being held, he said.

“The immigration landscape was very different 20 years ago,” Acosta said.

He agreed with the judge’s ruling and said it was “emotional” for him as he has pushed to end the contract.

“I definitely think it was the right decision,” he said. “I’m hoping Mr. Kenneally lets this chapter end in the county’s history. The ruling I read reinforced what the district court said, which is the state’s attorney’s arguments are weak, without merit and the state is lawfully able to do what they did when they passed the Illinois Way Forward Act.”

This story was originally published in the Northwest Herald.