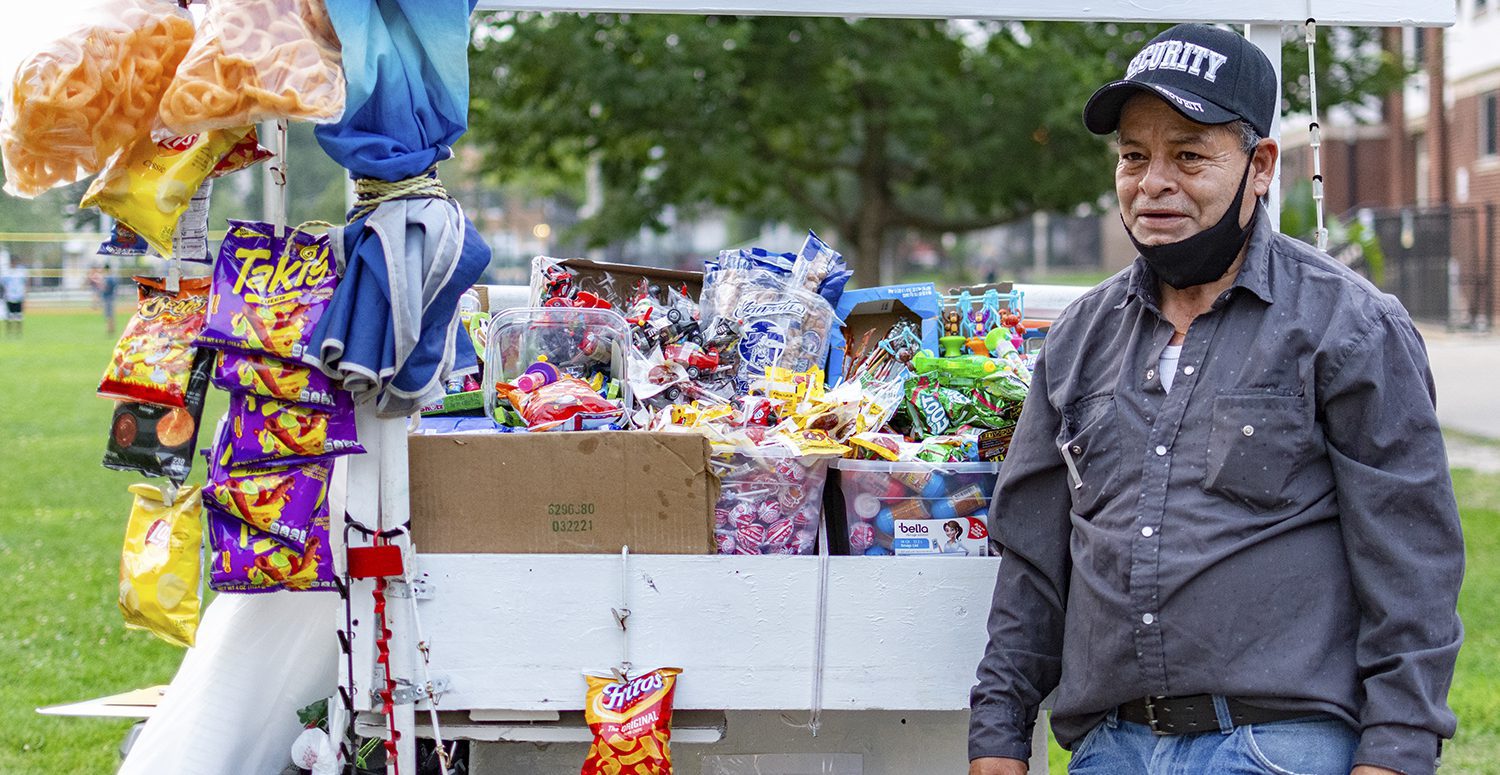 Street vendor Francisco Acosta in front of his cart on the Northwest Side of Chicago, Ill. Photo by Natalie Garcia for Borderless Magazine

Portraits of Chicago Street Vendors After a Year of Crisis

Photographer Natalie Garcia visits immigrant street vendors on Chicago’s Northwest Side that have persisted through the pandemic.

In a typical year, street vendors already deal with tough requirements, from acquiring permits to navigating zoning regulations. During the pandemic, they faced a whole new set of challenges.

Borderless Magazine spoke to 28 street vendors in Chicago about their experiences during the COVID-19 pandemic. Immigrant vendors, who make up the majority of this community, often faced language and technology barriers to proper assistance. To make ends meet, many continued to work during the pandemic, even if that meant risking their health to sell to fewer people or finding a second or third job.

Francisco Acosta, who runs a cart on the Northwest Side of Chicago selling a variety of treats such as ice cream, raspados (shaved ice or blended ice drinks), chips, chicharones and Mexican candies, was forced to stop working last March because of the citywide stay-at-home order. Winter, during which Acosta typically relies heavily on the afterschool rush, yielded no income: He was forced to stay at home. He was able to work only two months last summer, which is typically his busiest season. The loss of foot traffic at the local parks, churches and schools, which were closed, left him with few places to visit. Most days, he spent just three hours at the quiet parks.

Even though he has been a street vendor in the neighborhood for over 12 years, Acosta did not qualify for any federal stimulus checks, federal grants or business relief programs. There are slim to no government-provided options for immigrant street vendors like Acosta. Instead, like many other vendors, he had to rely on grassroots fundraising campaigns, such as one organized last year by Increase the Peace, which raised close to $50,000 for street vendors. Acosta received a one-time $500 check from that campaign — his only form of relief in 2020. He struggled to pay rent in 2020 and is still trying to catch up.

Raul and Maria Salgado have been vending in Chicago’s Avondale neighborhood for over 15 years, selling a variety of snacks and raspados naturales like tamarindo (tamarind), lechera (sweetened condensed milk paired with ripe fruit) and diablitos (spicy shaved ice with homemade syrups) during the warm seasons. They hold other jobs in the winter: Maria works as a seamstress and Raul picks up factory work. Throughout the pandemic, they also supplemented their income by making masks and cleaning in local restaurants. They have continued to work and find jobs wherever they can.

Street vending is a fulltime job, but many see it as more than just an income. When asked about vending and its benefits, Raul said that he likes talking to a wide range of people from different cultures. He also likes being free from the pressures of a job with bosses and managers. While he said that he earns less than he might elsewhere, he actually enjoys what he does for a living and values the opportunity to spend more time at home with his family.

Similarly, Mayra Soto, a street vendor in the Belmont Cragin neighborhood, values the social aspect of what she does. When she’s outside with her cart, selling elotes, chicharones and candy, she often chats with and catches up with neighbors. More than her part-time job for her to make ends meet, vending is a way for her to connect with her community.

This summer, street vendors are back out in neighborhoods, trying to recuperate lost time and money, despite growing concerns about the Delta variant of COVID-19.

“In reality, vending is nothing special,” Raul Salgado said. “It’s just that one has to keep fighting in life to get ahead, make a living and prosper.”