‘Reverse Assimilation’ Podcast Unpacks What it Means to be Mexican-American

Photo by Andres Navarro
Jesús Herrera modeling Les Jesus, a fashion brand based on traditional Mexican craftsmanship which he co-founded with his husband. Herrera is a fashion designer and model whose family crossed the border without documents when he was six and settled in Rockford, Illinois. Herrera decided to move back to Mexico in 2010 and was one of the 1.1 million Mexican nationals who returned voluntarily between 2010 and 2018. Photo by Andres Navarro
By Ellen FreemanNovember 19, 2020February 11th, 2022Arts & Culture

Above: Jesús Herrera modeling Les Jesus, a fashion brand based on traditional Mexican craftsmanship which he co-founded with his husband. Herrera is a fashion designer and model whose family crossed the border without documents when he was six and settled in Rockford, Illinois. Herrera decided to move back to Mexico in 2010 and was one of the 1.1 million Mexican nationals who returned voluntarily between 2010 and 2018. Photo by Andres Navarro

Lisa Saldivar ordered lunch on a Mexico City street corner on a cloudy day in August. Her quesadilla came with friendly ribbing from the vendor about her imperfect Spanish. Like many American children of Mexican immigrants, she grew up in a household where family members spoke to her in Spanish and she responded in English.

As a kid trying to fit in as a first-generation Mexican-American in Texas she never expected her Americanized accent would have her trying to fit in all over again as an adult, only this time in Mexico City, Mexico.

Understanding how generations of immigrant families like hers weave themselves into life in the United States is the motivation behind Reverse Assimilation, a podcast that Saldivar created with mixed-media collage artist Jay Berrones.

Saldivar is an illustrator and graphic designer who moved from the United States to Mexico. She’s part of an increase in reverse migration over the last decade that has resulted in an estimated 1.5 million Americans currently living in Mexico. More people have moved to Mexico from the United States in recent years than the other way around.

Some of the Americans who move to Mexico are following their undocumented family members. Mexican immigrants living in the United States without papers have increasingly returned home in the wake of the U.S. economy’s slow recovery from the 2008 recession. Others are retirees stretching their pensions or remote workers looking to enjoy the warmer climate. 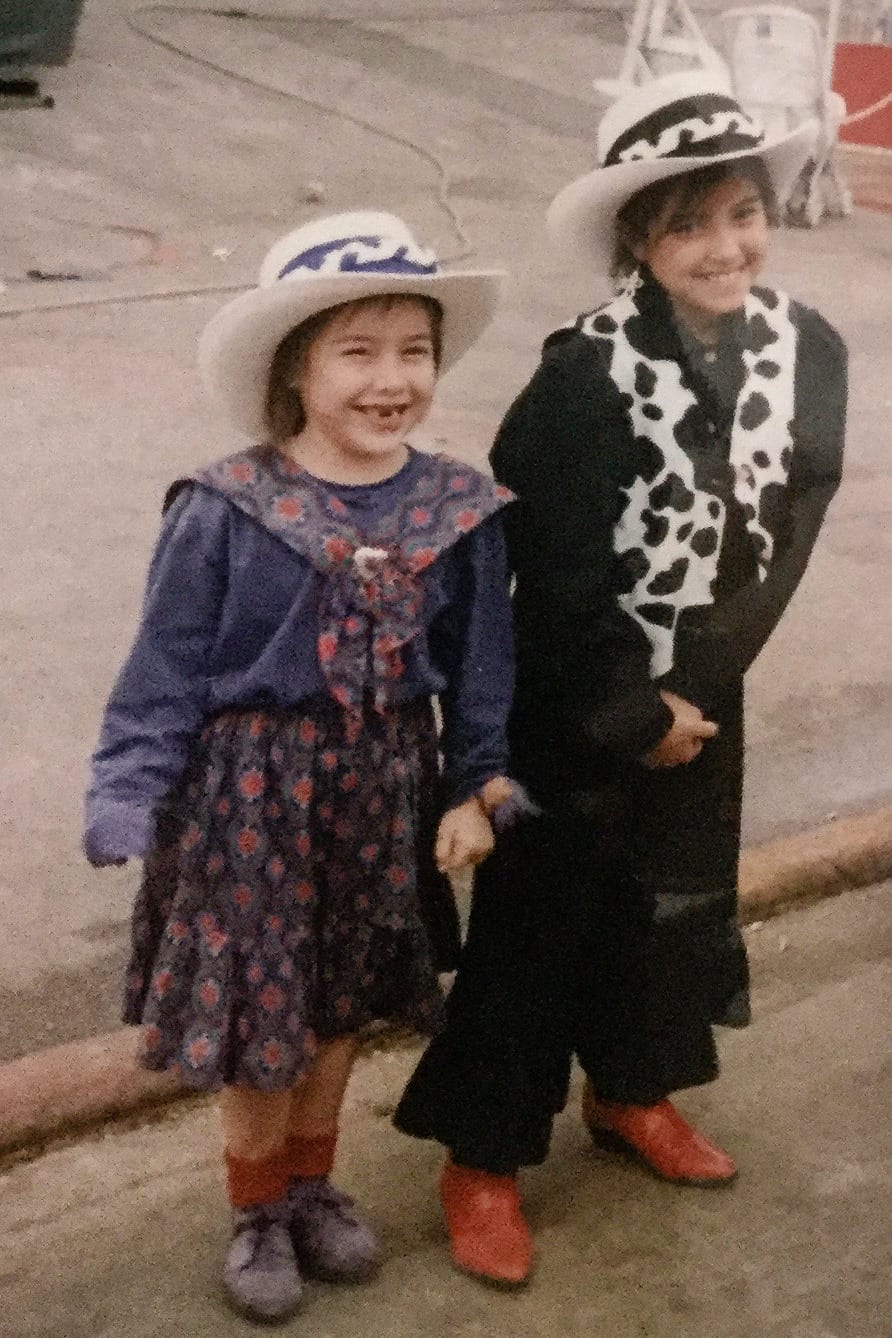 Still others, like Saldivar, move to Mexico to try and connect with their family’s roots. When she moved in 2016, she hoped to fill in what she felt was missing in her identity. But the reality of that effort, she discovered, is complicated.

When a truck lumbered by, meticulously packed with a mountain of stuff stacked at least twelve feet high, Saldivar burst out laughing in the middle of the street.

“I remembered all the fights my grandma and my dad would get into when we would go on vacation, because they would do that — Jenga together this crazy situation,” she says. “I’m seeing where my parents and grandparents had learned these things that in the U.S. were just something I wouldn’t want to tell the kids at school.”

These moments of frustration and revelation are the subject of Reverse Assimilation, which got its start thanks to Saldivar and Berrones meeting after renting studios in the artists’ space Los Catorce — a crumbling and technically condemned mansion in the San Rafael neighborhood of Mexico City.

After months of tentative greetings of “Qué onda?”— each assuming the other was born and raised in Mexico — they finally realized that both had actually grown up in Houston and moved to Mexico City. Both made the decision partly out of a need to answer questions about their heritage. 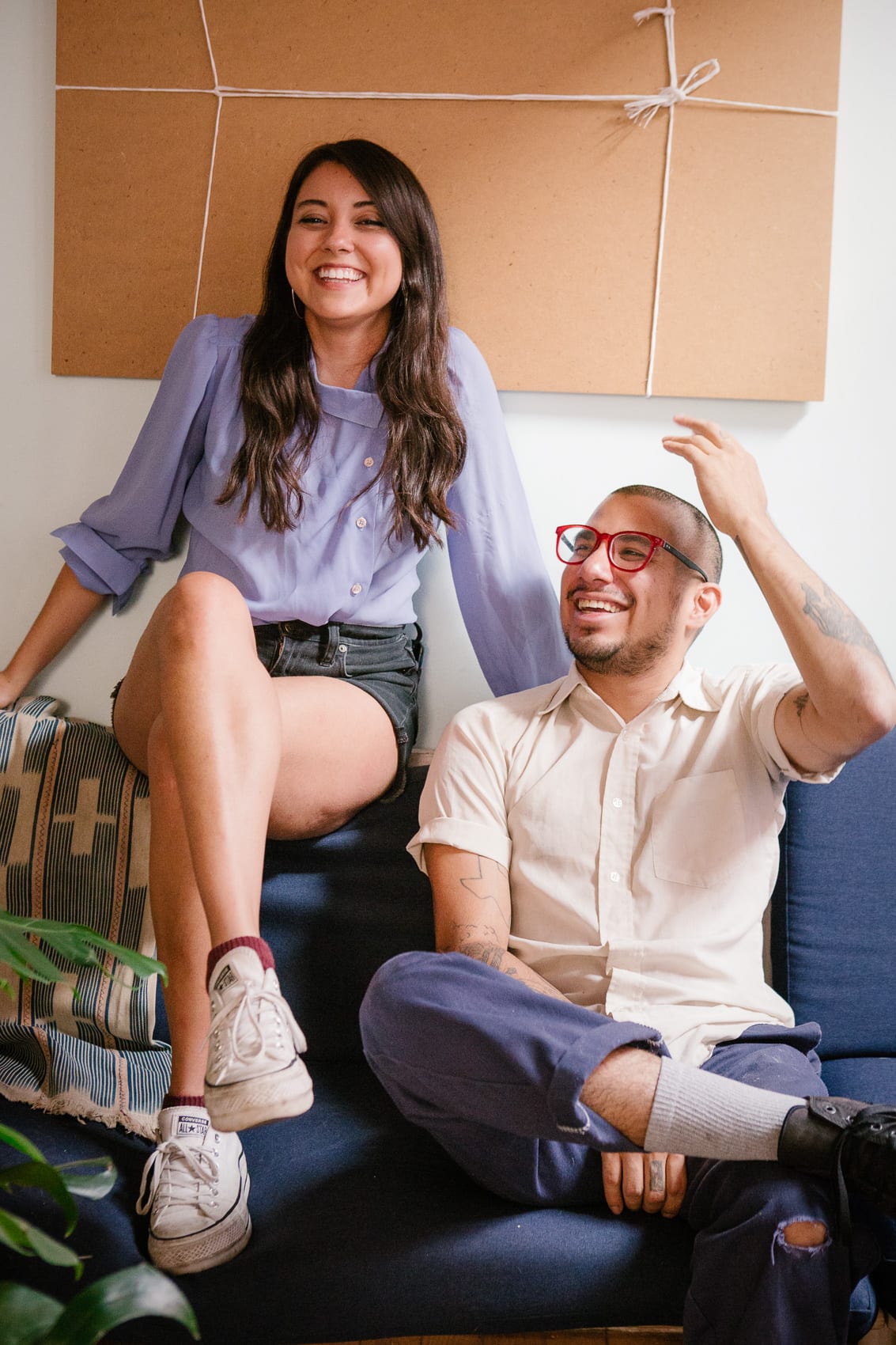 Lisa Saldivar and Jay Berrones, co-creators of the podcast Reverse Assimilation, on May 18, 2020 at artists’ space Los Catorce — a crumbling and technically condemned mansion in the San Rafael neighborhood. Photo by Alicia Vera

The day they realized that they talked for four hours.

“I actually think two or three hours in I was like, ‘Do you want water?’ because we were talking nonstop,” Saldivar says.

“The whole conversation was littered with, ‘I thought I was the only one,’” says Berrones, a third-generation Mexican-American whose family was crossed by the border when Mexico lost half of its territory to the United States in 1848.

He identified with Saldivar’s sense of cultural erasure over generations.

“When my mom was growing up in my grandparent’s house, you couldn’t turn anywhere without seeing the Virgen de Guadalupe,” he says. “But she taught me, ‘We don’t do that.’”

In the audio archive’s first installment of six episodes, released in September, Saldivar and Berrones host candid conversations with four fellow Mexican-American artists from southern California, the Midwest, Miami, and the borderlands who have found themselves living in Mexico City.

“We were surrounded by other Mexican-American artists, and when this topic would come up at parties, we’d see other people’s eyes light up; they’d have a lot to say,” says Saldivar. “We were already having these conversations, all we needed to do was provide a structure for it.”

The interviews consist of Mexican-Americans swapping stories and asking questions as they unpack their respective families’ varied experiences of assimilation into white American culture. Though Saldivar and Berrones emphasize that assimilation isn’t anyone’s fault or even inherently negative, they say it can become problematic when it comes at the loss of cultural expression.

Jesús Herrera is a fashion designer and model whose family crossed the border without documents when he was six and settled in Rockford, Illinois.

“You can’t keep both [your Mexican identity and American identity] present; you have to give one up to be able to do one well,” says Herrera, in the podcast’s second episode. So I became a ‘good American’ — whatever that means — and I became a ‘bad Mexican.’”

Saldivar and Berrones reference the assimilation spectrum laid out by American sociologist Milton Gordon in 1964. He describes a process of seven stages that roughly include adopting daily customs, entering the public sphere, intermarrying, speaking English as the dominant household language, and changing attitudes and beliefs — “sometimes to the point where one may champion attitudes constructed to erase their own cultural identity.”

Reverse Assimilation is Saldivar and Berrones’ attempt to locate themselves on that spectrum and then deconstruct it.

“I see it as unlearning and decolonizing growing up in a society based on white supremacist beliefs,” says Saldivar.

Herrera says that growing up in the Latinx community in a small town Illinois was “a world within a world.”

“Then the next layer outside of that was conservative and white,” he says.

A few months after migrating to the U.S., a classmate pointed out his huarache sandals. From that day forward he made a conscious decision to blend in.

“All there was at school was Britney Spears — I loved it honestly because it was so different than what I was experiencing at home where we were watching Telemundo and Univision,” Herrera says.

But also as a queer, undocumented, brown child with an almost-blasphemous name, it wasn’t safe to stand out.

“There was a huge amount of uncertainty whenever a factory would get raided,” Herrera says.

By the time he graduated from high school Herrera realized that even if he went into debt to get a college degree he still wouldn’t have the paperwork necessary for most jobs.

“I felt like I couldn’t exercise my full humanity in the U.S.,” he says.

Herrera decided to move back to Mexico in 2010 and was one of the 1.1 million Mexican nationals who returned voluntarily between 2010 and 2018. The term ‘voluntary returnee’ doesn’t convey the trauma of exile that many experience, though.

Herrera couldn’t get a visa to enter the U.S. legally and see his family for eight years until he married his American husband. Together Herrera and his husband founded Les Jesus, a fashion brand based on traditional Mexican craftsmanship.

“Our brand is a celebration of other colors, sexualities, queerness, possibilities,” Herrera says. 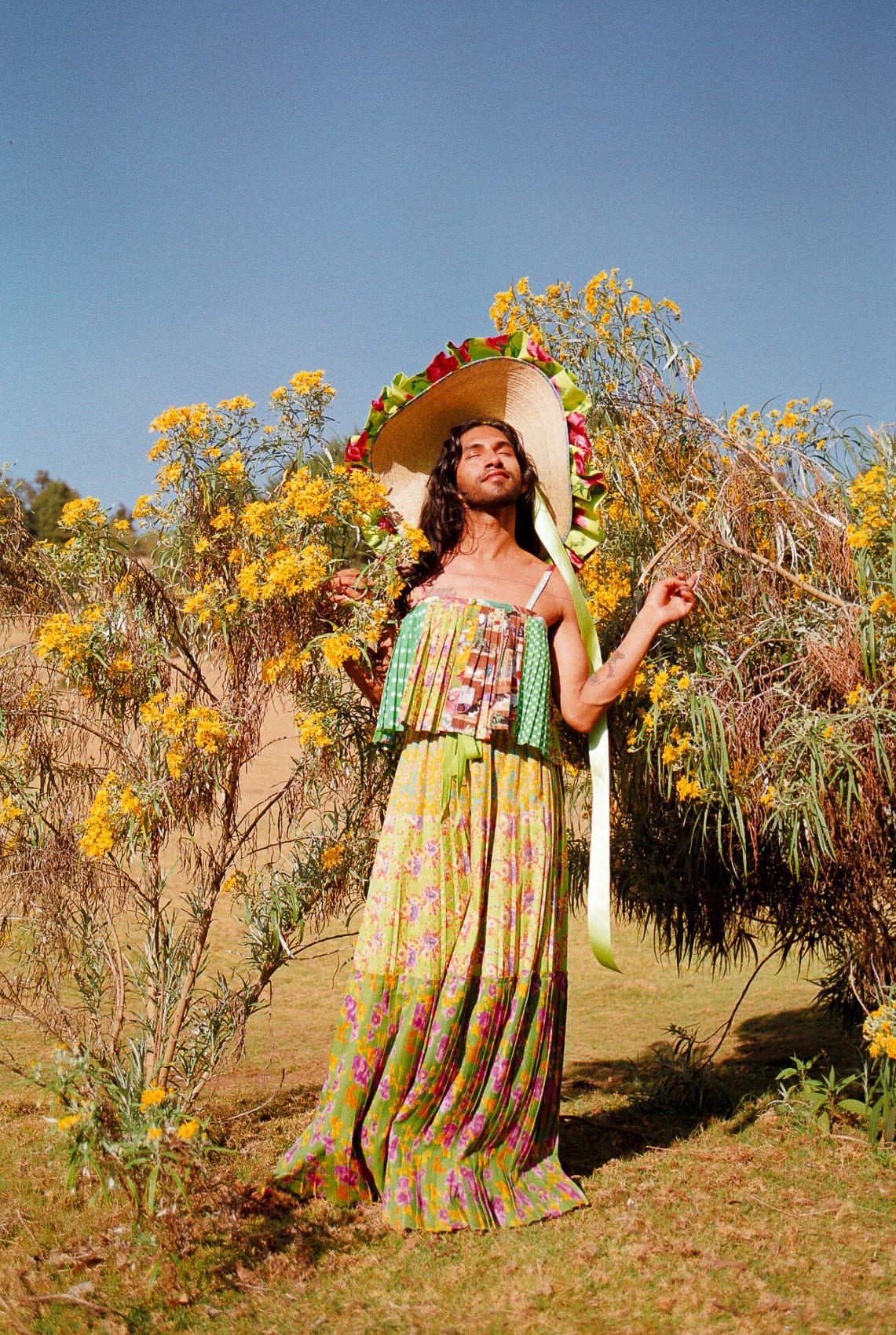 Jesús Herrera modeling Les Jesus, a fashion brand based on traditional Mexican craftsmanship which he co-founded with his husband. Photo by Andres Navarro

It’s also a reflection of the plurality of his identity, which came after years of introspection and reverse assimilation, in large part due to gaining a green card and no longer having to hide his legal status.

“Before that, I was trying to separate the two me’s — which me is Mexican? Which me is American? Then I realized they’re so entangled it doesn’t matter,” Herrera says.

Mexican slang colors the Reverse Assimilation conversations but the podcast is mostly in English. It’s a reflection of the audience Saldivar and Berrones hope to reach.

“If we’re gonna talk about reverse assimilating, we have to have something to reverse from,” Berrones says. “Our spoken language first and foremost is an indication of our point of assimilation.”

After living in the country, Saldivar and Berrones don’t believe returning to Mexico is essential to embracing their “Mexicanness.” Their intention now is to inspire conversations among their family and friends in the United States.

“I was always really conscious of wanting this to be for the Chicanx community,” Lisa says. Regardless if their audience identifies with that term or not, encouraging exploration of Chicanismo has become an unintended motivation for the duo.

The podcast is framed with archival audio and music collaged from a 1971 CBS report called Chicano, which discusses the Chicano movement protests in the 1960s and 1970s against police brutality.

As the artists worked on the podcast in the summer of 2020 it became a potent symbol of how much still hasn’t changed in the United States.

The division Saldivar and Berrones discovered around the term Chicanx — which the Chicano Movement reclaimed from an ethnic slur to represent pride, empowerment and solidarity among the American children of Mexican immigrants who rejected cultural assimilation — represents barriers they’re working to overcome in order to fully embrace their identities.

“Our parents’ generation saw it as this rebellion. A movement they didn’t want to associate with. They were trying to blend in and clear a path for their own version of success in American culture,” says Saldivar. 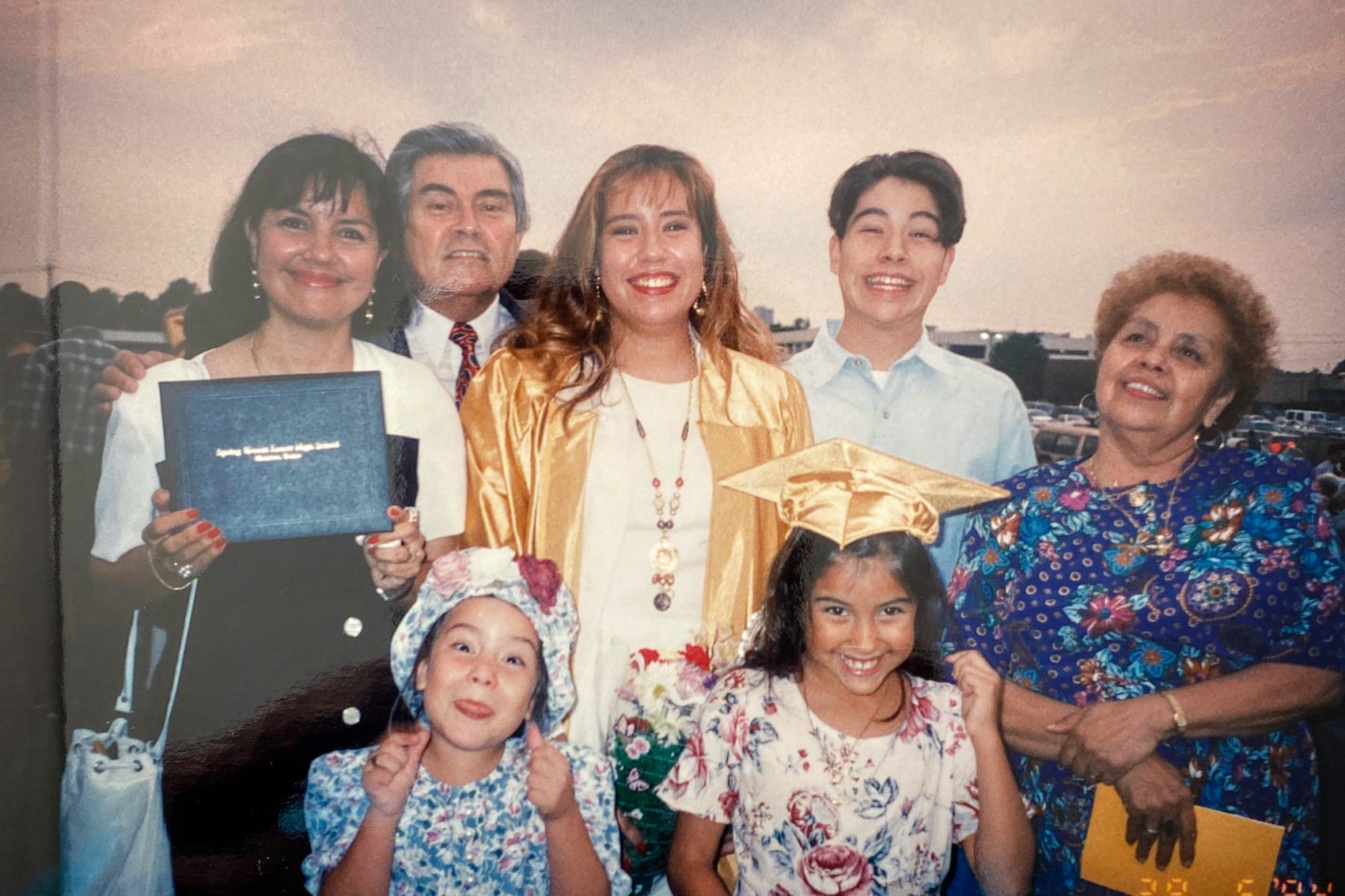 “I didn’t know how to associate my name with the word Chicano and really embrace it before this project,” says Berrones. “In The Chicano Manifesto, one of the most poignant phrases is that Chicanismo is an enlightened state of mind.”

That enlightenment is achieved through years of struggle, Sadivar says.

And it’s that internal struggle that Reverse Assimilation examines through community conversation. Someday soon, Saldivar and Berrones hope the project will evolve into an exhibition of visual art by Mexican-American artists working around the theme of bicultural identity.

For years, Saldivar has been obsessed with finding a way to visually represent the many ways that people experience the spectrum of reverse assimilation. “One of the things that has really resonated with me is the idea of it becoming more of a spiral rather than a linear spectrum. That you can be at two different points at the same time,” Saldivar says.

For Herrera, the conversations about this were deeply healing.

“On the podcast I was able to tap into things about my childhood that I hadn’t vocalized to anyone,” Herrera says.  “It was so liberating.”