Melanie Schikore on the asylum process

As told to Sarah Conway and Michelle KanaarNovember 13, 2018September 30th, 2022As Told To, Asylum City

President Trump signed a 90-day asylum ban Friday that makes it harder for immigrants to claim asylum. But just who are asylum seekers? 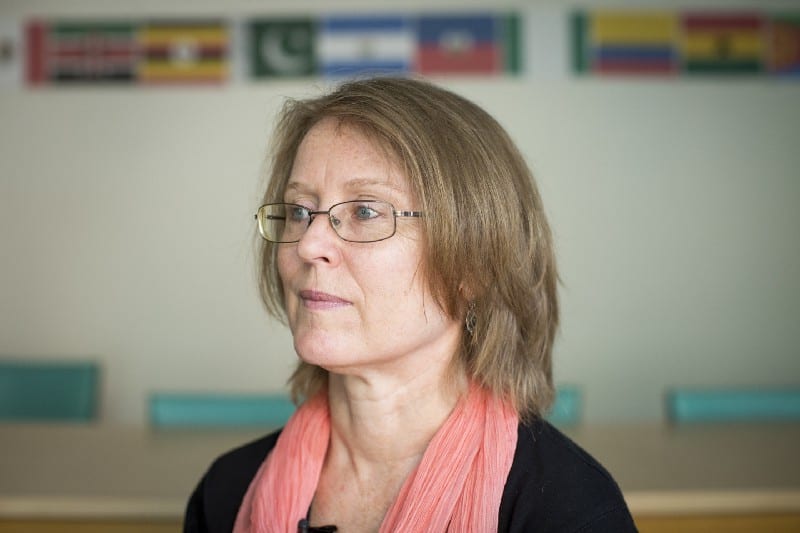 As told to Sarah Conway and Michelle KanaarNovember 13, 2018September 30th, 2022As Told To, Asylum City

President Trump signed a 90-day asylum ban Friday that makes it harder for immigrants to claim asylum. But just who are asylum seekers?

President Donald Trump signed a 90-day asylum ban Friday that makes it harder for immigrants to claim asylum if they are caught crossing the border between designated ports of entry. The new restrictions, which will force asylum seekers to wait weeks or longer at ports of entry to request asylum, were immediately challenged in court by the American Civil Liberties Union.

Melanie Schikore is the executive director of the Interfaith Community for Detained Immigrants. Her nonprofit is a faith-based organization that responds to the suffering of all individuals and communities affected by immigration detention, deportation and post-detention through pastoral care, advocacy, public witness and other activities.

Schikore sat down with Borderless to talk about the asylum process.

Borderless: What do you think the public doesn’t understand about asylum seekers who come to the United States?

Melanie Schikore: I don’t think people realize how difficult it is. I think it’s unfortunate that immigration and safety has been conflated with immigration and terrorism since Sept. 11, 2001. So the public is very wary of people from other places. We see the politicians claiming that we have to be safe, we have to protect ourselves from terrorism. But the irony is that the people that are seeking asylum are fleeing terrorism, violence or threats to their lives and they’re not a threat to us.

When asylum seekers come here they have so much to learn about American culture and about the way of life here. Until they get asylum, there is no government assistance for them. Things like food stamps or housing or job searching assistance, those become available to people after they win asylum. But while they’re seeking asylum, it’s community groups like ours that pick up this slack.

We provide wraparound care for them. We have case management and every case is individualized. People that come to us have a master’s degree in engineering, but they don’t speak English. Some of the people come to us and they speak some English, but they’ve never been in school. Asylum seekers have a wide variety of needs.

Borderless: You said people are fleeing violence and threats to come seek the safety of asylum in the United States. Can you speak more about the reasons people leave their home country?

Schikore: Everybody has a history of trauma because trauma is just part of why they’re leaving their home country. There’s also trauma in migrating — horrible things happen to people when they are vulnerable and traveling through countries that they don’t know.

And then there’s the trauma of detention. Asylum seekers are leaving countries and while they’re migrating the United States adds to their trauma by putting people in detention. Many of our participants express great surprise that this is how the United States treated them when they came here asking for help. They’re not criminals, but they were put in a jail uniform and shackled and taken to a jail.

Borderless: Who are the asylum seekers your organization works with and where are they from?

Schikore: People that are seeking asylum come from all over the world. Many are from Central America and that’s what makes the news. But also we have lots of people from Africa and Asia.

Asylum seekers are people who couldn’t wait until a refugee program was created because the violence or the strife they’re experiencing makes it unlivable in their home country. The danger is just so strong at the moment that they have to go somewhere else to live. So there are some asylum seekers that try to make it to the United States, but plenty of asylum seekers also try to seek shelter in a neighboring country.

Borderless: How should news media be covering asylum stories?

Schikore: Hearing the stories of asylum seekers is really important. I think that everybody that I know through this program has a story. If you knew their stories, each one would break your heart. Just knowing that fact is a mindfulness that we can practice about people leaving a country for asylum.

If they need safety and they choose to come to the United States for that safety, we should accept that at face value. They know what they’ve been through. We don’t.

And then once we know some of the details of their story, most of the people that we work with have been through things that in the United States are unimaginable. Whether that is torture because of your sexual orientation, or the level of violence in your country or coming from a country that is war-torn.

So getting an understanding of those stories and those experiences is important. I think there’s also a healing component for people to tell their stories. When we do pastoral care in the jail, there are lots of stories that we hear that we can’t do anything about. But we can hold that person’s story with them so they’re not alone with it. Some people that have suffered trauma are ready to tell their story because it can be cathartic and help them expunge the experience from their bodies by telling others what has happened to them.