An avid runner on how she came to the United States

Faustina Montoya is from the Mexican state of Guerrero and has lived in Chicago for twenty-seven years. 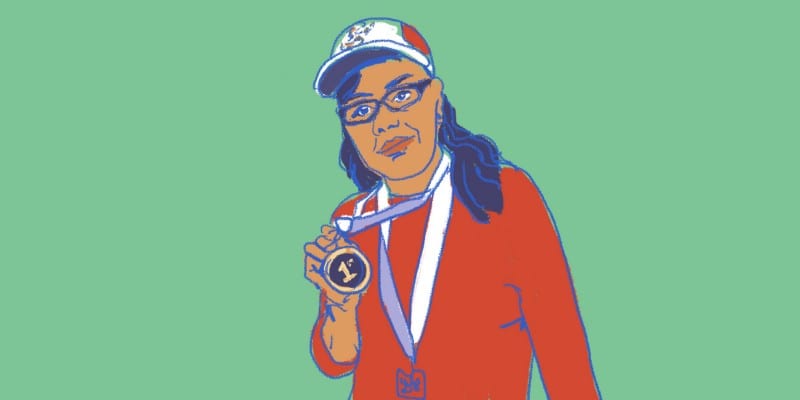 Faustina Montoya is from the Mexican state of Guerrero and has lived in Chicago for twenty-seven years.

Faustina Montoya is from the Mexican state of Guerrero and has lived in Chicago for twenty-seven years. She has five children and can be seen running down the sidewalks of Little Village three times a week as part of Viento, the local running group. Borderless sat down with her to hear about her decision to come to the United States and settle in Little Village.

My husband and I wanted to come to the United States for the opportunities, for a better life, and for a better education for our children.

At the time, I only had three children, the youngest being a baby. My husband had spent a year in California working as a gardener. He saw that we could live better here. When he returned from working in California for a year he brought back so many things we didn’t have in our home at the time, like a washing machine and a microwave.

But about fifteen days after he had returned to us, he told me he had to go back to work in the United States. I told him no, I waited here because you said you were only going to be gone for one year. I asked him why he had to go again, why I had to wait another year for him to come back. I told him we should save money and bring our whole family with him when he goes back to work.

He said he hadn’t come back to bring his whole family back to the United States and that crossing the border was too difficult. I told him no, you either stay here with us or we all go. I didn’t want to stay in Mexico with the children without him.

He said it wasn’t that he didn’t want us to come with him, but the money he had sent us while he was gone had been the money he made in California. What they paid him he had sent to us. He hadn’t saved any of it. I kept quiet and started thinking.

So it’s because we don’t have the money to cross the border? He said yes. So I told him I had all the money he had been sending me because I had been selling bread and tortillas. All the money he had sent I had put in the bank. So that same day we went to the bank, withdrew the money and headed to the United States with our kids.

When we went through Tijuana, I only had a tiny bag of clothes. That bag was stolen because I had not kept an eye on it. I was more concerned with my children. So we entered California wearing the clothes we had on when we decided to leave Mexico. We walked so much to cross the border. At one point, one of my children got sick from drinking unsafe water. It was hard, but we crossed.

That same night we crossed, we got to the home where my mother lived in California. And we lived in my mother’s house. The next day we went to a church, like its Salvation Army store I think, where they gave us clothes and food. From there, we got to work.

When I first arrived in California, the first thing I noticed was the the number of opportunities that we had. Like, you can basically eat whatever you want, whenever you want. But at the same time I felt bad because my oldest daughter would say, “Mom, I don’t understand anything here.” And at her school, it was a question of her learning the language, and there were some days she didn’t feel like going to school. But I told her she needed to go. So we enrolled her in a bilingual program.

In California, we had to live more frugally because we could barely make rent. It’s very expensive there and we only had a one bedroom apartment. I started to think that maybe we should return to Mexico, mainly because it was a lot of people living in that apartment and we felt like we were stacked on top of one another. It was difficult, because even though we were with my mom we didn’t have separate rooms like my children had become accustomed to in Mexico. We didn’t have a lot of space in Mexico either, but at least each child had their own little room. But in California that wasn’t the case.

It was hard to move into a new house that wasn’t ours. It was a lot of changes at the same time. I started working from 6 a.m. to 6 p.m. to start saving money so we could be a little better off. But it was very hard.

I had another brother who already lived in Chicago. He told us that we should go there because there was a better chance to rent and live in tranquility. So we went to Chicago and got our first apartment without anything to put inside it. Not one plate or glass even. And so we started again, working and building our life. Sending our children to school.

I told my children to study. That it was the proper path for them. To always put their education first. I worked at night and took care of my children during the day. And my husband worked during the day and took care of our children at night. That’s how we worked and saved money while living in an apartment for nearly 10 years. We saved enough to buy a small home. And now we have our little house.

Here in La Villita there are so many things that are great, but it would be better if there was less violence and less gangs. But we need more educational opportunities for kids to deal with that, so they spend less time on the street.

But here you can find everything you’d be able to find in Mexico. Like candy! And you can find clothes from Mexico. Everything. And the Discount Mall, I’ve been going there for so many years. I can’t think of another store like it. For years I never knew about JC Penny or other kinds of stores, because I could find nearly everything I needed there. Be it clothes, things for your car, food, toys, everything. You could find everything there, even a haircut.

As told to Alex. V. Hernandez