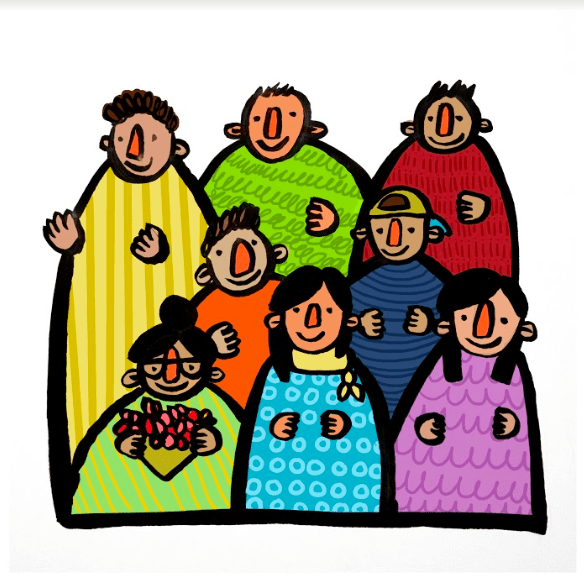 Jimena Martinez migrated to the United States with her parents and two siblings when she was five years old. For a long time, she tried to suppress her memory of crossing the border. It wasn’t until she was a lot older that she was able say that it wasn’t a dream.

Today, Jimena lives in Little Village with her husband and is a Deferred Action for Childhood Arrivals, or DACA, recipient. She works in health care for a major institution in Chicago. We have changed her name to protect her privacy. Borderless sat down with Jimena to talk about growing up in Little Village and her memories of crossing the border in 1989.

I remember running, holding on to my parents and being scared and being with a group of people. We knew two other people in the group who were family friends. They were helping my parents so there was an adult per child so we wouldn’t get lost.

I also remember one part being really fun. When we crossed into the United States there was a car waiting for us and we had to roll down a hill to get to it. I remember thinking, this is awesome. Everyone was rolling, both the kids and adults. We were all rolling into this truck.

After living in California for one year, we ended up in Chicago in Little Village. We lived with my uncle for the first five years until my parents were able to save some money. Then we moved to an apartment of our own that was a block away.

My parents were always straightforward with us about our status. I always knew I wasn’t from here. Whether it was experiences at school about not knowing English or people saying, “Why are you dressed this way?” Even though I was just a little kid, the immigrant experience was very real.

It was hard for my parents to find good paying work as undocumented people. In the nineties, it was very common for work raids to happen. My mom would work in different factories and talk about how there was a raid at work or that she was worried one would happen during her shift.

For my family, being undocumented meant not being able to be employed in regular jobs. It meant not having health insurance and being afraid at work. For me, it meant asking, what are my goals and dreams? And what are my limitations based on my status?

I wasn’t always sure if I would be able to go to college. My teachers in Little Village told me that yes, I could. But they didn’t know how. Sometimes there was someone who said, I don’t think that’s an option for you. So I went and asked someone else.

I was really grateful that my sister went to [the University of Illinois at Chicago]. She showed me that there was a way and told me how to speak to the faculty and admin and figure out what to put on the application forms.

The other piece was funding. I was very lucky that I got a full tuition leadership scholarship. That really took away the financial burden of going to college. But then when I got to college I was responsible for paying for room and board and books.

Being undocumented was a limitation but also a drive. I wanted to go to college. I knew there was a way to do this. So for me it was a big driving force. I was determined to find a way.

In college, I was really involved in a group for immigrants. We did some of the work about informing people about the Dream Act and what it meant to be an undocumented student. I was really hesitant about applying to DACA. It seemed too good to be true. It’s like a Band-Aid. It would give you a social security number, the ability to drive, the ability to have a driver’s license. But at the end of the day, it’s only good for two years. How do you plan your life on a two-year timeline? It takes a toll.

My brother applied for it first. When DACA was announced, he applied. I waited until he got his work permit and then I was like, OK, I can apply.

At that point, I had been working for a while and had completed all of this paperwork before stating that my status was different. And I was really worried about messing up the DACA application or thinking about all of the work applications I had filled out before not being entirely truthful. So I opted to work with an attorney to apply.

You have to prove that you’ve been here continuously. So from high school through college, it was very easy to do that through report cards or transcripts. But I didn’t have transcripts from grade school. Thankfully, my mom kept all of my school certificates and all of my report cards starting back in first grade or kindergarten. It was like perfect attendance awards.

Years before DACA, I had told her to throw away all of that stuff. But she was like, no, I want them. So because she kept them all, I could submit them to the first DACA application. Whatever she had left over, we donated to the Smithsonian for a new exhibition about growing up as a girl in the United States.

My sister’s a citizen now. She became a citizen the same year my brother and I applied for DACA. My brother and I still have DACA. My two youngest brothers were born here so they are citizens. My parents are now permanent residents.

For me, DACA has meant that I can work on a career I want, getting my master’s and a job in public health. It has also changed my life in little ways. I didn’t have an ID until five years ago. I was twenty-seven when I got an ID and driver’s license and was able to drive. I always think about that when I have to show my ID at buildings for work. I’m no longer scared of this question because I now have an ID that I can show!

I’m really passionate about health care as a social justice issue, and that really stems from my experience of being an immigrant and being undocumented and watching my aunt take care of her son, who had cerebral palsy. When I was in high school, my aunt came to live in my parents’ apartment building and my mom was like, you can help her navigate the health system. I had been interpreting and trying to figure out health care things for my parents that I shouldn’t have. But my mom was like, you’ve done a good job with us. Now you can do that with your aunt and cousin.

Up to that point, I hadn’t visited hospitals or health systems outside of Little Village. My family got their care in free or federally qualified health care centers. Because of my cousin’s condition, he ended up going to Northwestern to see many specialists and needing speech therapy, physical therapy, and occupational therapy. And I remember thinking our health care system in Little Village looks really different than what I experienced with my aunt at Northwestern, from the physical buildings to the quality of care, like long wait times during appointments and interactions with the doctors.

My cousin’s name was Danny and he had Medicaid. He was four years old and in a wheelchair.

I interpreted for my aunt during his doctor visits so that he could get a doctor and get all of the services and so he could go to school. I grew very close to him.

My mom said something happened and they called your aunt to pick him up from school and to take him to the doctor. So I was like, this is bizarre.

He got sick at the school and the school couldn’t figure out what he had. As opposed to calling the ambulance, they called my aunt to pick him up. She wanted to take him to the nearest hospital, but she was afraid she wouldn’t be seen without her medical card. So she stopped home and picked up the card and took him to the hospital. But he was just too sick. He ended up dying that day.

That story makes me so sad and angry because my aunt made that decision to come home first based on her past experiences and interactions with the health care system. I imagine an alternate ending where she didn’t come home and went to the hospital first and they said, we can’t see you, go home and get your insurance card. So either way the story’s ending is not a happy one.

I don’t think Danny’s story is unique to someone who’s undocumented. Low income or uninsured people die because they lack access to medical services or get care when it’s too late. That experience made me want to go into health care and help other immigrants in neighborhoods like Little Village.

Sometimes I wonder what it would look like if Little Village was adequately resourced in terms of schools, employment, and health care. I think it would be a much better place in terms of dealing with violence and poverty.

But the people in Little Village are really welcoming as neighbors. You can’t really buy that neighborly feeling.

Most days, I think it’s a good thing to be in Little Village. In college, I once shared with people that I was undocumented and I was ostracized. A student group wrote an article about me and asked other students to report me to immigration services to deport me. That was never my experience in Little Village because there was a huge percentage of people who were undocumented. You are not an outsider if you’re undocumented or a DACA recipient. But now, given the political climate, it does feel like our community is a target.

As an immigrant community we’re inherently resilient and strong. It’s been an identity and a sense of pride. But at the same time, with the current political climate, it makes me wonder if maybe we shouldn’t have been so vocal about it.

As told to Nissa Rhee