They came to destroy. ISIS forces flooded the Sinjar region of Iraq at dawn determined to wipe out Yazidism, an ancient faith with a rich oral tradition. 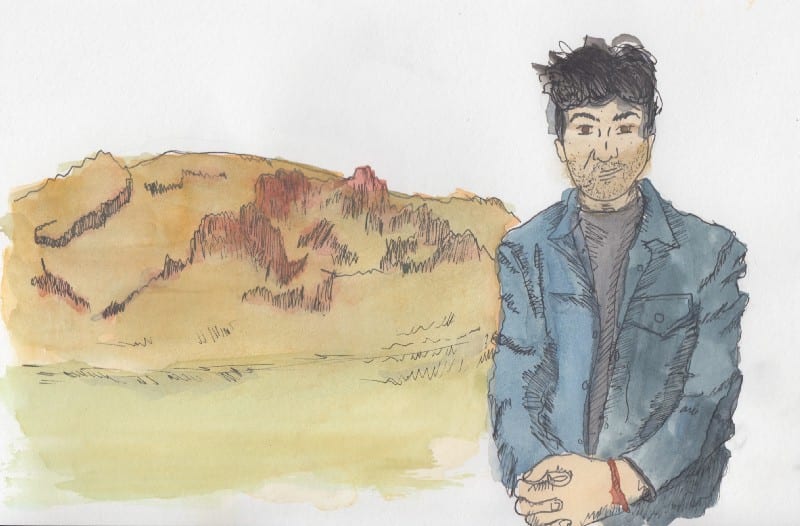 They came to destroy. ISIS forces flooded the Sinjar region of Iraq at dawn determined to wipe out Yazidism, an ancient faith with a rich oral tradition.

They came to destroy. ISIS forces flooded the Sinjar region of Iraq at dawn determined to wipe out Yazidism, an ancient faith with a rich oral tradition. The United Nations’ Human Rights Council has described the events from August 2014 as genocide. Thousands of Yazidi men and boys were killed and some 7,000 women were abducted and enslaved.

Twenty-three-year-old Hazim Avdal documented the genocide of his people as a young man in Iraq. He made waves in U.S. media earlier this year when David Letterman revealed on his Netflix show that George and Amal Clooney has sponsored Avdal to come to the United States as a refugee. He now is working on his undergraduate degree at the University of Chicago.

A self-taught programmer, Avdal created software to help Yazidi women survivors get government assistance. Over a thousand women have used it to date. He also designed a database system to record the medical history and to track the prescription medications of all patients in a camp of nearly 16,000 internally displaced persons. Through his work Avdal eventually crossed paths with Amal Clooney, an international human rights lawyer who campaigns for ISIS to be prosecuted through the International Criminal Court.

I never imagined I would be a freshman at the University of Chicago studying computer science after everything that happened in the past few years. Learning has always been a form of survival for me. I graduated high school as the seventh highest scoring student in Iraq in 2013 with a GPA of 100.17 percent. It was a moment where everyone in my small town of 2,000 people celebrated my success as if it was their very own success. I was their son or their brother who had surpassed a perfect score on the national test. It was a town where everyone knew everyone — we were like a big family.

My parents’ generation was certain that mine would finally change the fate of Yazidis in Iraq through education. Under Saddam, the Iraqi government destroyed Yazidi villages near Mount Sinjar, then moved villages to new areas to exert control of these populations. There were few schools, and most Yazidis depended on agriculture and farming year round, so few children were able to study.

But even after the schools were built our safety never really improved. After the US invasion in 2003, everything spiraled out of control in a shift from systematic government oppression to bombings and attacks by al-Qaeda because of our religious identity. During those years, it was hard to know who your enemy was. They would attack us then fade back into society. Life in Iraq really stopped for Yazidis from 2003 to 2014. It was like living in a constant state of terror where you felt afraid all the time. Even today, it feels weird sometimes to sleep here in Chicago and feel safe.

When you flee a genocide your family needs you more than anyone.

All my dreams of university fell apart in 2013 when buses transporting Yazidi students to the University of Mosul were attacked. Two bus drivers died and flyers were distributed warning Yazidi students to not return to school or face death. In one day more than 2,000 Yazidi students dropped out of university. For me, education was everything. I never imagined life without it. I had already played out every scenario of my academic career in detail — I would do this, I would do that as part of a clear plan for my future. But just one day ruined my plan and my life. On my own, I kept on coding and studying programming with the dream that I’d one day be able to go back to school, but the next year ISIS ended everything.

Mount Sinjar west of Mosul is the only thing that Yazidis own in Iraq — just one mountain. It is how we have survived 72 genocides that have been passed on in our oral culture from generation to generation. When Sinjar district was attacked, more than 350,000 Yazidis fled, almost half went to the mountain in dry 100 degree heat without food or water. Those who couldn’t flee were rounded up, and either executed, or taken away to be sold or trafficked. Most of the men were massacred. So many people went missing, or died from dehydration or injuries.

That August over 7,000 Yazidi women and girls were captured and systemically sold. Children were taken from their mothers, and shipped off to be indoctrinated with extremist ideology. ISIS was successful in doing so because children’s minds are impressionable — like a blank sheet of paper. These events: were catastrophic, a total derooting of us from our land as a people.

Abducted women were treated as property. An ISIS fighter would come to a room full of Yazidi girls and buy one or two for $100 and take them away. Mothers were separated from daughters; even seven-year-old girls were not safe. ISIS fighters were monsters.

My family and many others fled, inching further and further north because nowhere felt safe until we crossed a border. Five months later, I found myself living in a refugee camp in southern Turkey when I heard that a nonprofit run by Yazidis called Yazda. They were looking for a volunteer to do IT support back in Iraq. I was intrigued. One of their projects was to help Yazidi women survivors who’d escaped the homes of ISIS members reintegrate into society through financial and social support.

Oftentimes, these women were the only survivor in their family, arriving in an overcrowded camp with no support and no tent. Imagine surviving those experiences with no family to hold you afterwards, or to listen to your stories when you are finally free. At that time, neither nonprofits nor the government were taking care of these women. We were really among the first.

Although all my knowledge of coding and programming was self taught at that point, I knew there were few Yazidis like me who could help these women somehow through technology. When you flee a genocide your family needs you more than anyone. But still, I packed my bag and said goodbye to my mother and retraced my path back to Iraq in January 2015.

We worked with the Iraqi government to give these survivors monthly allowances, but government bureaucracy demanded in-depth applications with personal information and proof of their stories through recorded testimonies. These testimonies would later become the basis for a genocide report to the International Criminal Court. One way I could tangibly help these survivors was to create secure software to house this information and get them government support. I still believe that data and testimonies will bring those who committed this genocide to trial one day.

Before this project, I had a fairly good programming background but it was nowhere near the knowledge needed to make a sophisticated database management system. Getting this system ready was nonstop work, where you wake up at 4 am and close your computer at 11 pm, because you are driven by tangible change being within your reach. Within three weeks I produced the first version of the software and after a few improvements, I was able to give staff the ability to press a button and produce a report instantly for Baghdad.

Testimonies were necessary. I alone did at least 70 interviews with women who had been enslaved and it was not an easy job. I know that a young man isn’t the best person to have done these interviews, but we had no other option, and so in the absence of trained, gender-appropriate interviewers, I was asked to help. I realized in the process that it’s impossible to know the scale of the tragedy that these women endured even when you hear their stories.

Often I would sit with a survivor, and while listening to her, I began to psychologically experience myself what ISIS did to each one of these women. I was living their experiences in a way through my interviews. After every interview, during the whole day, I would think about her, her suffering, her experience, her future. Their stories haunted me.

There are many stories that I will never forget. I remember a mother with three children, the oldest was just three years old. She was told to quiet her children, and when she could not stifle their cries from hunger, ISIS fed her children poison, then buried them. Just imagine, that mother, I don’t know how to describe it.

There was a 7-month-old girl named Tolai. I still think about Tolai. She was sexually abused by ISIS fighters then locked in a closet until she starved to death. These women carried stories so they wouldn’t be forgotten, then it was my turn to carry them, and maybe now it is yours.

All these stories, all these tragedies that happened, it was not easy to listen to them, yet listening gave me the energy to do that work. I knew by listening, I could help these women maybe even in just a small way. I figured that these women who had escaped were in need of everything, especially financial support from the government, so my small sacrifice was just to listen. Listen to survivors and really let them talk, that’s what I learned.

Here in Chicago, I think about how four years have passed and there has been no action to recognize this genocide. The international community has not taken an effective step to bring those who committed these atrocities to trial. Even today there are women who are still missing and there are mass graves with no experts to excavate them. The evidence is there, but the UN and the international community must make a firm step to bring those behind these crimes to trial.

Sometimes I think about my town and our very tight social bonds, our fields, or my friends but then I remember all these tragedies and horrible stories. When the people who make up your memories are gone, home is gone, too. Unfortunately that is how genocide works, a place and its people become a memory.

Now, I’m a student again so I’ve achieved my dream of returning to school after all—though at 23 I’m usually the oldest in all my classes. For me, the city feels safe, which is something I’m not used to yet. While I study I think of ways that I can stop the world from forgetting our stories. After everything, all I want is for the experience that Yazidis went through to never happen to anyone again—no one deserves these tragedies. We need to stop wars, not start them. In the end, saving lives should be everyone’s goal.