Omar El Akkad on journalism and the War on Terror

Omar El Akkad’s debut novel, “American War,” is a haunting post-apocalyptic universe where readers watch the impact of civil war through the unraveling of one American family. 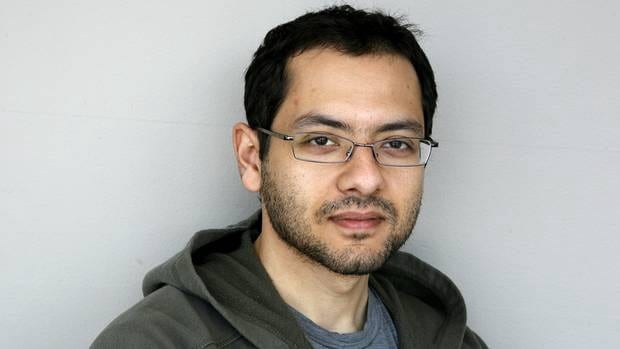 Omar El Akkad’s debut novel, “American War,” is a haunting post-apocalyptic universe where readers watch the impact of civil war through the unraveling of one American family.

Omar El Akkad’s debut novel, “American War,” is a haunting post-apocalyptic universe where readers watch the impact of civil war through the unraveling of one American family. Set at the dusk of the 21st century and the beginning of the 22nd, El Akkad’s novel dissects the Second American Civil War between the North and the South—a result of the consequences of climate change and the use of fossil fuels.

El Akkad was born in Cairo and grew up in Doha, Qatar, before moving to Canada. He’s now in the U.S. and has worked as a reporter for The Globe and Mail, where he’s covered domestic terrorism, the war in Afghanistan, the military tribunals at Guantánamo Bay and the Arab Spring.

His deep understanding of the War on Terror from years of reporting informs the novel and how he describes the cost of war on civilians who find themselves suddenly trapped in combat zones, drone strikes, and refugee camps with little hope for the future.

Those events play out amid the morbid scenery of a presidential assassination by a secessionist suicide bomber in 2073, massacres, displacements, and guerrilla fighting on both sides. Eventually a biological agent is released by a Southerner that results in a decade-long plague that claims 110 million lives.

The Chestnut family is at the heart of “American War.” A poor family from Louisiana, the Chestnut children lose their father to a suicide bombing and end up in Camp Patience, a refugee camp near the Tennessee border for a half-dozen years. Sarat is the novel’s focus, as a feisty young girl turned woman determined to protect those she loves at any cost. Along the way readers watch as she is slowly pulled by fate and dark minds to commit an unthinkable act.

The novel is also about revenge: Almost all American transgressions in the Middle East over the past century are reenacted on American soil. A new pan-Arab empire is willing to fund American militias, not because it agrees with them, but because doing so deepens American divisions.

Characters are informed by El Akkad’s reporting over the years on some of the world’s most vulnerable people trapped between warring factions, used as human shields, and radicalized for suicide missions. “American War” demonstrates a profound understanding of the corrosive nature of conflict, and its hypocrisies and mythologies. Civilians, first and foremost, always bear the bitter fruit of war. As El Akkad pens, “To survive atrocity is to be made an honorary consul to a republic of pain.”

Borderless sat down with El Akkad to discuss his debut novel, his life as a journalist and nonfiction writer, and what inspired his novel.

Borderless: Tell us about your journey into the world of journalism.

Omar El Akkad: I grew up in the Middle East in Qatar, and Qatar is one of those places where if you turn off a certain part of your soul it’s a very easy life. You know everything: everybody has drivers, Mercedes and all the rest. And you’re expected to grow up and be a certain kind of professional, be it a manager, an engineer, or a doctor. There’s a certain set of things that constitute real careers, and an artist or a writer is not one of them. Those things don’t exist as a path that you do with your life; they are hobbies you do on the side, maybe.

When you arrive in a place like Canada, it’s like a million doors all fling open with the possibilities of things you can do and say all at once. But I was still in that mode of I need to find a real, acceptable career, so I ended up going to university for computer science. I remember my first day there was a programming exercise where you had to move a little robot from one end of the maze to the other. I spent an hour writing this program out and then I hit enter and the robot went in circles three times and crashed into a wall and I realized that computer science was not for me, but I was too lazy to find another major.

So for the next four years, I earned a computer science degree but I never went to class; I spent all my time at the student newspaper. I wanted to write and that was the way to get into writing for me. I was fortunate enough to build up a very small and significant portfolio, and then I applied to internships and the summer that I graduated I landed an internship at The Globe and Mail. And they kept me on for 10 years, from 2006 to 2016.

Borderless: How did you move from the world of journalism to nonfiction writing?

Omar El Akkad: Journalism was very close to what I always wanted to do with my life: nonfiction writing. With journalism, you get a paycheck for writing. It wasn’t fiction writing, but it was close and I enjoyed it. And when it was good, it was really good.

When I first started I was in my early 20s I had this very sort of Hemingway sense of wanting to be stuck between the bullets as the swashbuckling war correspondent. I very much wanted to do that because I was a naive 20-something-year-old boy, and then early in the summer of 2006, during my first week of work, Canada had the biggest terrorism arrest in the country’s history.

The Toronto 18 was a big terrorism case of all of these kids who had these grand plans to behead the Prime Minister, blow up Parliament Hill and all that kind of stuff. I remember our editor called an all-hands-on-deck meeting, and he asked around the room for anybody who was familiar with the Middle East, because that’s where some of these people’s parents came from. Basically, he wanted anyone who is familiar with Islam or the Arabic language, and all he could find was me and a theater critic in this massive newsroom of 900 journalists. So he dispatched us to the mosques where these kids used to go to be something like “ears on the ground.” This is one of those rare situations as a young journalist where a newsroom editor is like, “You get as much copy as you want for the front page.” The next year of my life was covering that story and how second-generation youth become radicalized. I think this was part of the inspiration for “American War” and my desire to understand how a second-generation immigrant goes from high school in the suburbs of Toronto to trying to build a detonator.

Borderless: Did this influence character development in “American War”?

Omar El Akkad: I remember stories of these recruiters who would take kids up to the forests north of Toronto where they dug a grave in the ground and they’d make this kid in the middle of the night lie down in the grave and they would say, “If you don’t support radical jihad and become a martyr, this is where you will lie for eternity; you will never go to heaven.” When you learn about stories like this in your reporting, you begin to connect the dots of how someone is radicalized.

This type of reporting informed my next steps to becoming a foreign correspondent eventually covering Afghanistan, Guantánamo Bay, and the Arab Spring. This sort of collective knowledge base that I got from years of reporting on this sort of stuff inevitably found its way into the writing process for “American War.”

For me the entire story is the story of how Sarat Chestnut goes from this curious, trusting, loving young girl to a weapon being used by a fundamentally evil person. I knew I had to show through my work that simple point that there is a lot that comes before and after in these types of situations, which I learned from covering these kinds of stories over the years.

Borderless: When did you begin working on “American War” and was there a moment of inspiration for the novel?

Omar El Akkad: I began working on the novel in the summer of 2014 and finished the first draft almost exactly a year later. One inspiration point for the novel was several years prior when I was listening to an interview with a national security expert during the height of the NATO-led invasion of Afghanistan. The question that stuck out to me was, “Why do they hate us so much?” I remember the reply, that sometimes U.S. soldiers have to conduct raids in Afghan villages, and that during these raids they often rummage through villagers’ houses—turning them inside out while they hold the residents at gunpoint. The expert explained that in Afghan culture, this is considered offensive. I remember thinking to myself, name me one place on earth where this sort of thing wouldn’t be offensive. This moment led me to consider what it would be like if all these wars that the West has had the luxury of observing from a great distance were instead to take place at home on U.S. soil.

In turn, I wanted “American War” to tell the story of a people who can’t escape or dismiss war because of distance, and to reach the heart of readers so they understand that love, suffering, and vengeance are always the same no matter geography.

Borderless: How did you arrive at 2074 as the year your fictional Second American Civil War breaks out?

Omar El Akkad: Global events that are critical to the novel’s plot needed time to take shape. Mainly, the creation of a democratic pan-Arab empire and massive land loss to climate change that exceeds even the most alarming climate scientists’ projections of what the world will look like toward the end of this century. In my mind, I was never writing a novel about the far future, but one that is relevant to the world we live in today.

Borderless: Where does the main character’s name, Sarat Chestnut, come from?

Omar El Akkad: In particular, she was named after Southern female figures of the American Civil War. The first was Mary Boykin Chesnut, a famous diarist from South Carolina who kept a diary during the thick of the Civil War years, capturing what was happening in the life-and-death of Southern society at that time. I also took inspiration from Mary Elizabeth Jenkins Surratt, who was a boarding house owner convicted of taking part in the conspiracy to assassinate U.S. President Abraham Lincoln. She was the first woman executed by the U.S. federal government.

Borderless: What do you want Americans to take away from reading “American War”?

Omar El Akkad: I subscribe to the notion that once an author lets go of a book and it goes out into the world what they want readers to take from it is completely irrelevant. That being said, I would hope that they see it as an anti-war novel, albeit a fairly violent and bleak one. At its heart, I would like readers to understand why a person does something without necessarily taking their side, or apologizing for it, or even liking it. That in some person’s mind, it is a form of defense. The book is an examination of that gray space between “us” and “them” that’s been largely obliterated over the last 16 years. At the end of the day, it is a story of characters and I would hope that more than anything else it is a story of Sarat Chestnut. It’s her story, that’s all, really.