Maudlyne Ihejirika is an award-winning reporter and editor who has spent over 25 years at the Chicago Sun-Times. 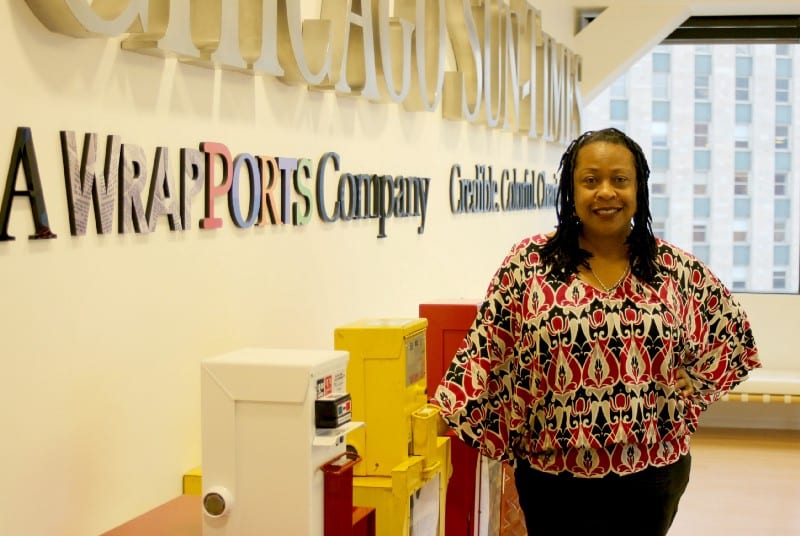 Maudlyne Ihejirika is an award-winning reporter and editor who has spent over 25 years at the Chicago Sun-Times.

Maudlyne Ihejirika is an award-winning reporter and editor who has spent over 25 years at the Chicago Sun-Times. Last year she published her first book, “Escape from Nigeria: A Memoir of Faith, Love and War,” in which she tells her mother’s story of raising and protecting six small children during the famine and deprivation of the Nigerian Civil War.

Borderless sat down with Ihejirka to discuss her family’s escape to America 47 years ago and how today’s refugee crisis — and many people’s apathy toward it — takes her back to Biafra.

There is a pullback in the global community, and more and more there is this sense of we, them, us, they. This sense of circle the wagons and never the twain shall meet. We experienced this opening up of borders in the past decade and felt what it could be like to live as one big global community. But that’s been eroding in the past year, and most definitely in America. It’s the idea that we should only think about, or have anything to do with ourselves, whoever we are.

I was a child of five when my family escaped the Biafran war. We arrived at O’Hare Airport on June 9, 1969. We were the rare arrival from Biafra, a nation mired in a brutal war with Nigeria after it declared its secession. My family was blessed to escape a brutal civil war that left two million of my people, the Igbo people, dead primarily from massacres and starvation. It was the first time in modern history where starvation had been used as a tool of mass destruction.

We escaped only through the confluence of several miracles. My father was here studying at Northwestern University, but he had been studying at the University of Sierra Leone when the war broke out. For two and a half years, neither my mother nor father knew whether the other was alive or dead. My mother struggled to protect six small children in a very brutal war. She both witnessed and survived the unimaginable in order to still be alive when God intervened and sent an angel in the form of a missionary nun who helped my mother smuggle a letter out of the country to Sierra Leone. We then found out that my father was no longer there. By then he had gotten a scholarship to the United States, to study there, and had accepted it when he could not return home to Biafra.

The war had severed all communication; no one could get in and no one could get out. So, the letter was smuggled to Sierra Leone, and again God allowed that letter to fall in the hands of someone who then took the letter across the globe to the United States. Then in Evanston, at Northwestern University, God sent more angels.

My father’s instructor and mentor originally believed that my father’s family was dead, because he had witnessed the images beamed across the globe and into living rooms of women and children dying with emaciated bones and extended bellies. My father, however, had refused to give up hope. When my mother’s letter came, he was finally able to show that letter to the instructor, who then felt so convicted that he and four other couples on the North Shore banded together in the most heroic effort to, number one locate my family in a raging war, and then obtain a Congressional Resolution allowing our family to come in to the United States despite Biafran refugee quotas that had already been met. And number three, negotiate with the fledgling Biafran government for our freedom, which entailed money to ensure our freedom and flights out of Biafra, through Europe and eventually to the United States. So I sit here across from you, truly a miracle, truly blessed to be alive, to have survived, and to have been allowed entry into the United States.

When the current refugee debate first began to fill the headlines, I was very, very moved by the fact that we are facing the largest number of displaced people globally since World War II. It took me right back to 1969. I follow the issue as a journalist always with a conviction that I was certainly one of the blessed. I always believed there might come a time when I will have to give back on this issue. Giving back has been something that my mother and father instilled in us. We grew up with intrinsic knowledge that we were miracles and blessed immensely. To whom much is given, much is expected.

Therefore, we have always given back to our home country and my mother has established food kitchens in our village, brought running water and paid for it ourselves out of our family’s pockets. My mother simply says, “Hey! We have to bring the village running water,” and simply everyone starts writing checks. My mother says, “I think we need to establish some soup kitchens now, the hunger is astronomical,” and everyone starts writing checks and we start shipping whatever we need to ship. My brother is a doctor; he will go back and take other doctors that work for him, and spend two weeks there treating the people, and shipping tons and tons of medicines that we take for granted that they do not have. So my family is deeply rooted in gratitude in what was done for us.

I knew as the issue grew that I felt there was something as a journalist that I would be called upon to do. As a journalist, we all raise our voices on issues that we feel passionate about. We give voice to those people that we feel need voice, so as this became a global crisis, I knew that it was incumbent upon me to make sure that I follow the issue and raise my voice when the time came.

It just so happened that I had been working on my mother’s memoir for the past 15 years. Three years ago, I finally finished taping and began writing. The book was published in May 2016. With the publication of my book and the presidential election in America — where the anti-refugee and anti-immigrant rhetoric really escalated — it became very timely that I would be presenting a book that really talked about the refugee experience and brought it home. When we say that refugees from six predominantly Muslim countries cannot find refuge or shelter in the United States, every woman and child that cannot come in could very well be like my mother Angelina Ihejirika and her six children.

So how do I feel about it? I take the issue very personally because I know, therefore the grace of God go I, and therefore it is incumbent upon me as I present this book to really help people understand what we are talking about when we are denying refugees or shutting our borders.

The issue is very personal and emotional for me. When I speak on it, I’m always at the brink of shedding tears because I mourn for those that will never find refuge here. I mourn for those who will never find other ways to find safety, and safe harbor from the storm. When the photo of the little boy in Syria who was pulled from the bombed out home with blood and soot all over his face was beamed across the globe, I cried. His face haunted me for weeks. I saw him in my dreams, I saw him when I woke. The reason is that I knew that little boy was me.

When I see Syria, all I can think of is Biafra. When I see the images of women and children my heart breaks. When I see them traversing the European countryside being parlayed from one country to the next, as the global community plays hot potato with the issue because we can’t say go back to your home, we can’t send them back because there is nowhere to send them to.

There needs to be a global recognition when these type of wars are going on that the global community must do something. In Nigeria the global community played hands off until they saw the images of bodies strewn and bellies with stomachs turned on themselves. It wasn’t until they saw that they said, “Oh my god, there is genocide taking place here.” It was at that point that they began to bring food and air drops to Biafra. I am immensely grateful for that because that’s how my small family of seven got food.

When I think of that, and then I fast forward to Syria 50 years later the global community is again playing hands off — with these countries supporting that faction, those countries supporting that faction, and letting Syria implode. How can we as humanity be ok with that? At what point do we say, we learned something from the Holocaust? We can’t sit by and let genocide occur over and over. It’s humanity feeding on itself.

Look me in eye and understand that I was a refugee, that I was one of them, and 50 years later I sit here and I implore whoever is listening to do something. Do something. Don’t sit by idly. I see the Biafran war everyday in Syria, and I see it in every other war where the world has sat by with people dying.