Abu Shadi on revolution and imprisonment in Damascus 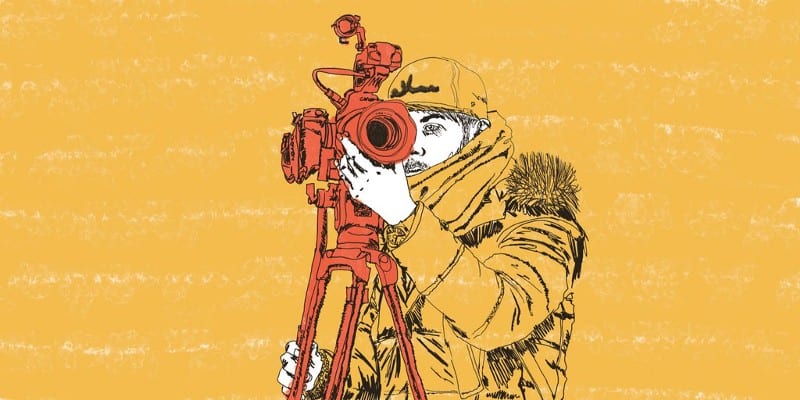 Abu Shadi, 27, was born in Damascus and sought asylum in Chicago in 2013 after he was arrested and tortured for more than a month by the Assad regime, for filming peaceful protests. (We’re referring to him by his nickname, to protect his identity during the asylum process.) Today he continues his work as a filmmaker while studying computer science, and waiting for word on his asylum application. In a special collaboration with The Chicago Reader, Borderless spoke with Abu Shadi who reflects on Trump’s April 7 missile strikes on a Syrian government airfield, and the painful memories the strike conjured.

[Editor’s note: This post contains descriptions of violence that readers may find disturbing.]

Just after Trump’s missile strike, I shared a meme on Facebook. It was of Trump wearing a tarboosh [the traditional Syrian red tasseled cap], with “We love you!” written below — a slogan that any Syrian knows from photos of Assad inscribed with the same message. Propaganda slogans were forced down our throats in posters, books and photos. “We love you” is a phrase that you couldn’t escape in Syria. It’s about the cult of dictatorship. People who aren’t Syrians might assume we now love Trump, and I can’t deny I’m happy about his missile strike on the Syrian government. But the irony is that he is someone who made us the enemy just a few months ago.

[On this image] I commented, “I believe in you,” in a reference to a Fairuz song because I love her music, as all Syrians do. It’s a dark joke, I guess, because Syrians have very little to believe in these days.

On one hand, I’m happy that, finally, a world power acted in Syria to stop the use of chemical weapon attacks against our people. On the other, we all know that Trump warned Putin — our new Syrian president — before the strike. Somehow, even if the strike is just a political game, it still it gave me a sense of hope that I haven’t felt in a long time. Usually the world only presses “like” or “dislike” for Syria, but this time it felt different.

I’ve developed a complicated relationship with social media, because, honestly, I can’t see dead Syrian civilians anymore. For us, the images of dead bodies are not just news; they are our family members, friends, and people. I see my family in the photos of the dead, but most of all, it’s a reminder that the world watches us and does nothing.

It’s hard to believe that it has been six years since the revolution. I was just a 20-year-old computer engineering student in the beginning. I remember sitting with friends in 2011, and one asked me, “Do you think what happened in Libya or Tunisia will happen here?” We all agreed that the Arab Spring would never spread to Syria. The regime was too strong and the people were too afraid to stand up for themselves. But it did, and everything changed.

When I went to my first protest, I was so afraid. Just after Friday prayer, everyone poured out into the streets from the mosque. Even at that time, protests could mean death. We had all heard about protesters getting shot by the Mukhabarat [the Syrian military intelligence]. At first I felt fear, but then in the streets this fear disappeared, and I just felt free among thousands chanting, singing, wanting to be heard.

After a few months my friends and I were protesting every day, sometimes even twice a day. I chose to document this revolution, and I felt it was my duty to share it with the world as a photographer and videographer. I couldn’t use a real camera because it would make me a visible target, so I learned to shoot good video on a Samsung Galaxy S1, then upload the footage to YouTube for the world to see. I would find an elevated area slightly above the protesters and shoot the scene from behind so as not to identify anyone’s face, as I knew the government would watch these videos on YouTube. I filmed around 400 protests before I was caught.

My friends and I heard that the government knew my group of friends had been attending and filming protests. To be safe, we hid out in a friend’s apartment who was out of the country, but they found us.

It was like any other night: I fell asleep, while one of my friends talked to his girlfriend on the phone, another was up studying for his classes. Around 2 AM I woke up to the cock of a gun over my head. Four officers were standing above me while I lay on my back looking up. “Don’t move,” they said, while pointing their guns at me.

They searched the home for weapons, guns—anything to prove that we were terrorists—but they found only books. Unfortunately, they found our laptops and discovered footage of protests as well as photos and songs about the revolution, sealing our fate. My friends and I were then blindfolded with our own shirts pulled over our heads. My last memory before detention was being led by soldiers down the stairs of the building and glimpsing through the stretched brown fabric of my T-shirt to see a soldier stationed every second step. Why were they so afraid of us? We were just students. Someone called the police on us and turned us in, but I will never know who made us disappear.

At first I was taken to a station in Mezze, and for six hours we were beaten with hands, feet, guns—any object they could find. I had never been beaten before. A lot of people die during this first interview. While you are being beaten you wonder, will I live? Afterwards, I was taken to a basement where I was tortured by four men.

Two held me down while the others twisted my foot, grabbing it with a tool. As they pressed my foot, they demanded to know what I had done. “Why did you bomb Mezze neighborhood yesterday? Where are your guns?” they screamed. After 30 minutes of torture, you get smart and you will confess yes to everything. You just want to make the torture stop. With everything he asked, I said “yes.” Anything he demanded to know, “yes.”

It was just one day of my life, but it felt like two. There were no lights, no clocks. After that I was taken to a Mukhabarat jail where I was held for one and a half months. Just know that you go to these types of places in Syria to die. I remember for over two weeks, every day I thought, “Is today the day I will die?” Sometimes during torture I left covered in blood; sometimes I left with marks returning to the small room with around 100 men.

There was [usually] no space to sit down on the floor, so we could only stand together, and if I could sit on the floor it was for just for a couple of hours. There were no windows, no air. It was a room so small that I could feel the moisture of our sweat on my skin and in my breath. There was a constant liquid on the ground that made us feel so warm that none of us wore clothes, just our underwear. I remember there were people of all ages in that room. Some talked. Some prayed. Some were silent.

My friends and I thought that once we made it to court that this would all be over. I remember on the day of our trial, we lifted our shirts to show what the soldiers and Mukhabarat had done to our bodies, and we explained how during torture we said yes only to make it stop. Somehow we believed that the truth would set us free, but instead we were sent to prison for crimes we never committed.

This time, it was better than before, with edible food and a chance to talk to your families. I was there for just 24 hours, before my family bribed the government for my release. I was told to leave Syria or face rearrest. So I left to Egypt, then eventually I acquired a student visa to come to America.

After five months, I claimed asylum in Chicago. My case has been pending for four years now, but in the beginning, I would check the mailbox every day for updates on my asylum case. After a few months, it was every week. Now, I don’t check the mailbox. It’s not that I don’t care. I care a lot, actually, but what can I do?

Despite everything, within my first week in Chicago, I went to a protest held downtown for Syria. I wasn’t nervous about going back to protest because I love this freedom, but most of all, I still go to protests here because I want Americans to know what is happening. I want them to see a face representing those who have disappeared.

Co-published in the Chicago Reader.