Igor Schyb on being born without a country

As told to Margaret TazioliApril 18, 2017As Told To, Audio

An ethnic Ukrainian, he began his life in a refugee camp in Munich, Germany in 1949. 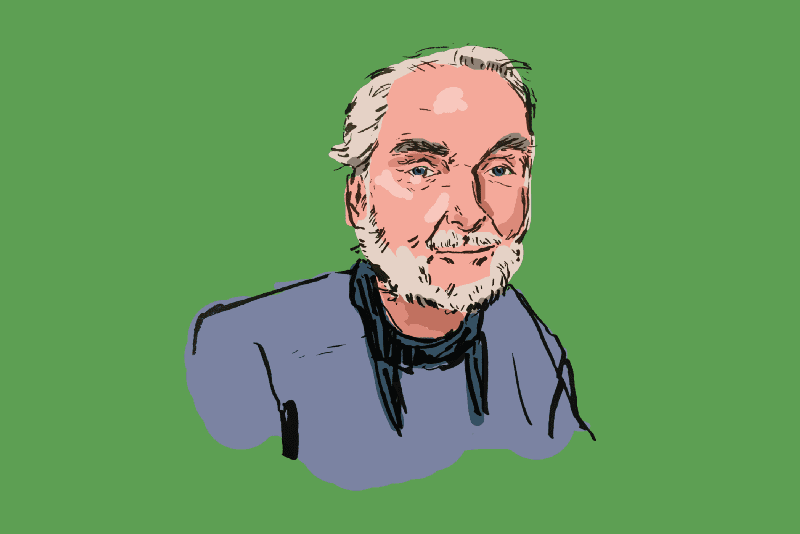 As told to Margaret TazioliApril 18, 2017As Told To, Audio

An ethnic Ukrainian, he began his life in a refugee camp in Munich, Germany in 1949.

Igor Schyb was born without a country. An ethnic Ukrainian, he began his life in a refugee camp in Munich, Germany in 1949. His family immigrated to America when he was two years old and they found a new home in the Ukrainian Village neighborhood of Chicago.

Borderless sat down with the 67-year-old retired psychologist to talk about how his father became a soldier in the Ukrainian division of the German army during World War II and his family adjusted to life in the United States.

My parents were taken from their homes in Ukraine by the Nazis. The Nazis informed each family in that part of Ukraine that they required one family member to provide work for the German war effort and if they did not, the rest of the family would go into a concentration camp. My father was 19 years old and my mother was 17 years old.

The Germans near the end of the war were so stranded and needing additional soldiers that they formed ethnic armies to fight against the Russians. When the Ukrainian boys — really young men who were about 20 years old — were told that they could fight against Communism and the Russians, they took it on.

My father traveled to more than 12 countries in a year. His Ukrainian division was under the SS and they were called the Nightingales. They had an emblem with a fighting lion in the colors of Ukraine: blue for blue sky, yellow for fields. Later, when the Americans were going over his papers to accept him into the United States, they found he never fought against the Allies, except for the Russians. And that was under the guise of helping to fight against Communism to gain liberty for his country.

After the war ended, my parents could not go back to Ukraine because the Communists considered them counter-revolutionaries. The English noticed that when refugees like my parents returned to their home countries, their luggage survived but they didn’t. So, the English and the Americans were kind enough to provide housing and food for people that were displaced from their own countries.

My parents lived in a war refugee camp in Munich. The housing was German army and air force barracks. I remember it was not colorful. I remember grayness on the walls. And I remember playing with Mongolian kids that lived in a different building.

Ukrainians lived in one building, Russians lived in another building, and Mongolians lived in a third building. Sometimes they mixed the ethnic groups like with the Czechs and the Lithuanians and the Yugoslavians. They wanted to avoid disruption between groups, because some of those groups were in wars from thousands of years ago.

Germany was safe, but Germany did not accept people like me. I was born in Germany but they did not accept me as a citizen. I was an ausländer, an outlander. They did not treat us as members of the community of Germany. We were just displaced people. So we ended up with green cards that said “displaced person.” We were stateless and had no country.

My family came to Chicago when I was almost three years old in February of 1952. Some of my parents friends from Munich sponsored us to come to the United States.

I remember being on the boat and I remember this like it was yesterday: after the folks that ate prior to us left, I found a harmonica under the table, a red harmonica with silver kind of looking metal. It was my first musical instrument and my favorite toy, and I remember having it for years and years and what happened to it, I don’t know. But I found it on the boat coming here.

I had no idea where we were going or how we were going to get there. I didn’t know if the ending was good or bad. I just trusted my folks, and they took care of me.

My mother always liked Chicago. She liked the skyline. She liked the lights. And she thought the city was pretty nice and that there were a lot of Ukrainian people here. We had churches here, which is very important to Ukrainians. Our community is built around a church.

When we came over here to the United States, we had to stay with our sponsors for two weeks while my parents found an apartment behind a shoemakers shop. It was a one-bedroom apartment and the back entrance of the apartment led to the alley because there was no fence. I remember rats jumping up and down. I was almost three, so I wanted to catch a rat. And my mother said, “No, you can’t play with those things, they’ll bite you!” So, I stayed away from them.

Later I learned that my parents were paying $25 a week for rent, which was over $100 a month for the one-bedroom. Once we got to Ukrainian Village, we didn’t have to pay $25 a week in rent anymore. It was like $30 for the whole month.

That neighborhood in the 1880’s was set up to be a Ukrainian stronghold. As refugees living in the Ukrainian community we were part of a community of refugees. So, it wasn’t like we were refugees. I went to Ukrainian grammar school. The church, St. Nicholas Cathedral, is in the middle and you can see it anywhere you go in the neighborhood because it’s built on a little hill.

My father was a machinist; he worked in the Finkl Steel mill. My mother was a charwoman, a cleaning lady at 333 Michigan Ave.

If the gas man came to read the meter, and he had a clipboard and a hat that looked official like a cop while I was in the yard playing, my mother would freak out. “My god, oh here come the Gestapo. We’re going to get arrested. Get in the house kids!” It was the gas man. They were that afraid.

But that’s what they used to do in Ukraine during Communist time. And in Germany. They used to call it the “Black Raven.” The car. It was a big black car. They would just come over, whizz you off.

I never felt like I belonged because I felt like we were always outsiders — marginal human beings. Americans don’t consider me American. My name’s Igor. People cannot even say Igor. It’s a palatalized “G.” When I went for my doctorate, just 60 miles out of Chicago, even the professors, the PhD’s, laughed at my name. They said: “Do you have a nickname? Use your nickname.”

And Ukrainians don’t consider me Ukrainian. I never had grandparents, uncles, aunts. You know, either the Communists or the Nazis killed them. Something happened to them. It’s an unusual position to be in, and it brings tears to my eyes because I don’t have a country.

I’m 67 years old now and I have outlived most of my friends. My friends who were very close to me actually were born in the same place and time as I was. They came over at the same time also on boats.

We had no roots. No center. It was like a gypsy kind of a life.