It’s been three months since Khaled Almilaji has seen his pregnant wife. 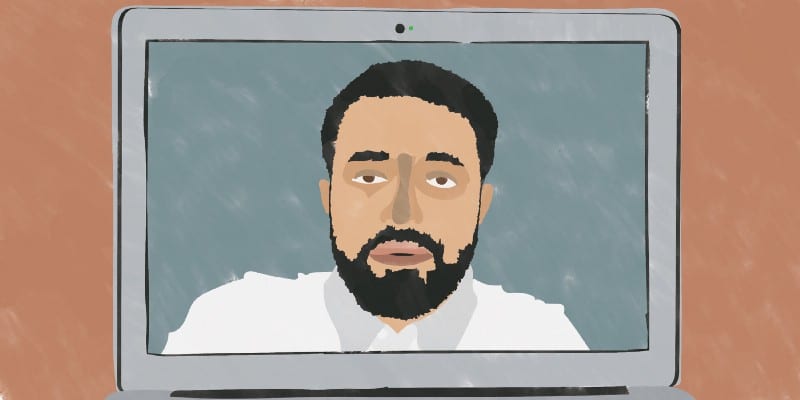 It’s been three months since Khaled Almilaji has seen his pregnant wife.

It’s been three months since Khaled Almilaji has seen his pregnant wife. A graduate student at Brown University in Rhode Island, the 35-year-old physician has been stuck in Turkey since January because of President Trump’s travel ban on Syrian citizens entering the United States.

Borderless talked to Almilaji about his work as a doctor in Syria and how he and his wife have coped with their separation.

The revolution started and I joined. As doctors we considered ourselves responsible for providing health services to Syrians, especially to those who no longer have access to medical care. When you swear to provide health care to your people, how can you ethically leave them without medical care during a revolution? As a doctor, I always felt it was my duty.

Like thousands of Syrians, I was put in prison for activism and providing medical care to injured protesters in field hospitals set up throughout Syria. In the end, I was arrested for giving health care to people who couldn’t go to regular hospitals out of fear for arrest or execution.

In the prison there were no nurses or doctors, so the guards asked imprisoned doctors like myself to provide medical care. Sometimes I was taken from solitary to do an examination blindfolded. I could only feel the patient with my hands and take a quick look at his skin for coloring. I worked without my eyes because they did not want me to identify prisoners.

My family waited for six months for my release. They heard from people that I was in prison, but when they would go and ask officials they would get a negative response. Recently released prisoners would risk their lives to visit my family to say that I was still alive. Many people are taken and disappear, and no one will ever know what exactly happened to them.

I wasn’t the only doctor. There were many of us in prison; some were eventually freed only to die later in targeted bombings on field hospitals. Some moved to Turkey after getting released, like me.

But I couldn’t give up on providing medical care. When the reemergence of polio hit eastern Syria in 2013, I had to act. I always thought of this as both a personal commitment and a responsibility to all Syrians, but now that I think about it, it was a responsibility really to the world. For the region this outbreak was horrible. But just imagine if polio jumped to another region. Syrian refugees were fleeing to Turkey, Jordan, Egypt, and Europe. As doctors and activists we knew this was a critical moment to act. If not us, then who?

Like many things in Syria, if we didn’t step in to fight polio, no one would. International NGOs didn’t have access, and many towns and villages were beyond government health facilities. We began a house-to-house campaign and dispersed teams to cover everything, while at the same time neighboring countries were vaccinating children in an area that covered 10 million people.

Our team consisted of 8,000 health care workers who were all motivated by freedom, democracy, and wanting to prove to the world that they were capable and willing to take on such an enormous challenge as one team. We wanted to show that we could handle anything, even in the worst of times.

We succeeded. In our first campaign we vaccinated 1.4 million children under the age of five years old. We watched the spread of polio stop, and until now there have been no children paralyzed from polio. This campaign was proof of my fondness for public health.

In the last five years, I have worked on the response to chemical attacks, monitoring networks on outbreaks, training doctors in war zones, and building underground hospitals. It was a huge volume of work to do in just five years. So for me, acquiring a Master’s degree in Public Health in order to know academically what public health means, and how to write articles for the advocacy component of our work now was something precious to me. That’s what Brown University was to me: precious.

But that disappeared. I left the United States on January 1 to go see my humanitarian team in Turkey, renew my residency, sign papers with my organization, check up with the guys, and see family members. I meant it to be only to be a one week trip as my wife was less than five weeks pregnant.

Then on January 7, everything changed. The airport closed because of heavy snowfall. There was something in my gut that told me that something was wrong that day. I found out that my visa was no longer valid and neither was my wife’s. I was asked to reapply. Now, with Trump’s immigration ban I am just waiting. I’m unsure of what my future is.

Before I took my trip to Turkey, I would come home every day to my wife after classes. We were always together. We were both studying and happy that finally we were improving our education. This was an opportunity where we could improve ourselves together, and that’s not something many Syrians have. But now, we see each other only through screens.

I am in the process of applying for a different program and scholarship at the University of Toronto. But I’m not sure of anything. I’m waiting. Without a scholarship, I can’t go there.

For me as a person, it means a lot for me to have a Master’s, and to know and work with my extraordinary American colleagues and friends. But in the end, I will keep doing what I do.

A lot of my Syrian colleagues and my friends lost their lives for this cause. It was the most noble revolution, where normal citizens sacrificed everything, even their lives, enduring torture and hunger to grasp freedom. Unfortunately, it was a revolution that was neglected too long by the world’s superpowers.