Hikmat Taha on coming from Sudan and making her voice heard 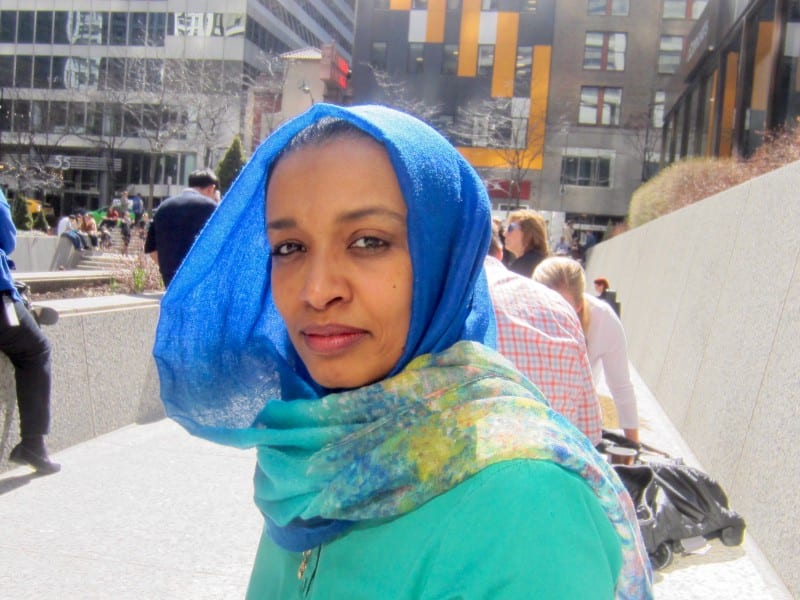 As a child in Sudan, Hikmat Taha watched her father spend time in prison for his political activism. Now, as a banking executive living in the Chicago area, the 47-year-old is reminded of those unstable political years as she struggles to make sense of President Trump’s election.

Borderless sat down with the banking executive to talk about her life as a Sundanese immigrant.

Borderless: Where were you born?

Taha: I was born and raised in Khartoum, Sudan. It’s in the center of the country. My mom was always a housewife. My dad was a lawyer. He worked all the way up to be the senior person in the bar association there. Then in 1989 he actually became a member of the Council of Sudan. At one point there were five people who were governing Sudan, and he was one of them. He always loved politics, and he was on the side of the opposition most of the time. So he went to prison many times because of his activism. It was different experience having him to go prison, come out, stay for a few months, and then go again to prison.

Borderless: I think many people associate Sudan with its 22-year civil war, which resulted in the deaths of two million people. What was it like when you were growing up there?

Taha: Growing up, Khartoum was always tolerant. We had neighbors who were Christians and Muslims. We never felt any animosity, they were just our neighbors like everybody else and we had really good relationships with them.

You hear about how there’s genocide in the south in Sudan against Christians, but to me my experience was never like that. We were all Sudanese. We all lived in the same area and I used to play with my neighbors’ friends who were Christian. My husband went to a Christian school in Sudan, even though he was Muslim, because it was one of the best schools that everyone wanted to get into.

Borderless: Why did you decide to come to the United States?

Taha: I met my husband while attending Khartoum University, a liberal arts college where I majored in English and minored in psychology. He was born in Seattle and went back to Sudan when he was about two years old. After finishing college, we decided to go to America. I wanted to be where my husband was.

Taha: It was a big change for me. I wasn’t that independent of a person when I came here. In Sudan, women are not raised to be independent. It’s not looked at in a bad way. They just think that women should be taken care of all the time. I’d never taken public transportation — there was always somebody driving me. So coming here was quite different because I had to become independent and take care of myself.

Before coming here, I knew the United States from what I saw in movies. There was always a big city and big buildings. So moving to Iowa from Khartoum was a shock. None of that was there. I was wearing a scarf from the very beginning, but one nice thing about Iowa is that the people are so kind there. So I never felt anything bad.

Since I married an American citizen, I could get a green card. The process probably took me five years. I have dual citizenship with Sudan now. Dealing with immigration was not the best experience. There were long lines, waiting, missing paperwork. It’s very bureaucratic.

Borderless: What did you think of the 2016 presidential election?

Taha: I always vote. I think my voice needs to be heard. I was definitely pro Clinton, and it was a shock for me to find out that Trump actually won. I couldn’t understand how people could vote for someone who is so intolerant to other people.

There was some fear for sure, especially because I’m wearing a scarf and clearly Muslim. After the election, my colleagues at work were calling me to check how I was doing and I had friends from my previous job that were calling and sending emails. I wasn’t expecting all of that support. It was very good.

Borderless: How has President Trump’s immigration policy affected you?

Taha: My sister was planning to come here this summer to visit, but when she went on the American embassy webpage to schedule an interview she found a note mentioning all scheduled interviewed are considered canceled and no new interviews will be allowed. We’re just waiting now to see how this whole thing about the ban will end.

The first days of the ban, I was very worried about going to visit Sudan and not being able to come back. There was so many stories about people coming back and either being beaten in the airport or not being allowed to even take their flights.

Now, I feel a little bit less worried because of how the ban was dismantled. I have a Sudanese friend with a green card who was able to come in from Saudi Arabia recently. There weren’t any issues or problems in the airport. So I’m thinking it should be fine if I want to go and come back, but things are just so unstable that you don’t know in a month what will happen. Maybe now I feel okay, but how about in another two months? For me, I lived in a political system where things are not stable and politics change overnight. But it’s sad to see that it’s happening here, where you just don’t know what will happen next.

Borderless: What is your message to Americans who are thinking about immigration issues in this country?

Taha: I feel that people have to make their voices heard when things are not going the right way. We’re in a country that allows you to voice your concerns, so we have to take advantage of that.

The most important thing is to be accepting of people who are not like you. If put yourself in their shoes, feeling discriminated against or feeling looked at as a second citizen, is not a good feeling. When you feel fear for just being a normal person like everyone else, it’s not a good feeling. That’s the ultimate test: Would I accept that for myself? Would I accept that for my children? If not, then don’t do it to other people.