Two friends set out to translate Chicago into Arabic 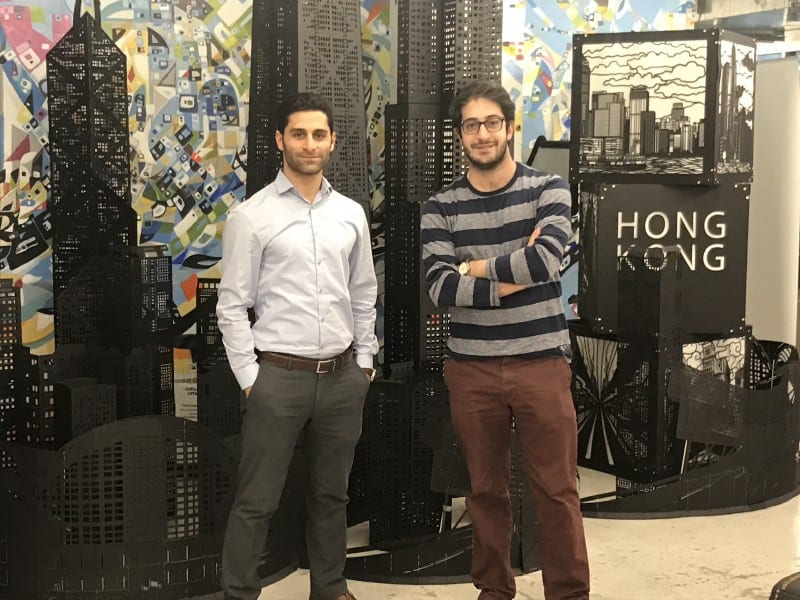 Chicago was love at first sight for Malek Abdulsamad. The 28-year-old Syrian architect had come to the city after a childhood friend from Damascus pestered him for a visit.

“Anwar could not stop talking about Chicago,” jokes Abdulsamad about his friend Anwar Jebran, who was here studying for his medical board exams. “I really wasn’t interested in seeing Chicago, but then I came for a visit and everything changed.”

Malek decided to move to Chicago to study a masters in urban planning, leaving behind the growing violence in his home country. And as the two friends bonded over their childhood in Syria and love for the Windy City they found a way to link their two passions. Chicago in Arabic was born.

The friends designed the popular Arabic language city event website to help Arabic-speaking newcomers and international visitors stay up-to-date on the city. With over 300,000 readers, Jebran and Abdulsamad are proud that they are helping people from the Middle East love their new city as much as they do.

Borderless sat down with Jebran and Abdulsamad to discuss Chicago in Arabic and the similarities between Damascus — the City of Jasmine — and the City of Broad Shoulders.

Borderless: Tell us about the inspiration for Chicago in Arabic.

Abdulsamad: The idea came to our minds about a year and a half ago. We kept asking ourselves, why is there no local Arabic news source despite this huge community of Arabic speakers in the city and surrounding suburbs? Anwar and I talked about it for a while, then we decided just do it. First, we rolled out the concept with a Facebook page of the same name. Then, a few months later, after getting serious attention, we thought let’s take it to the next level. And we invested a lot of time and energy in the project and rolled out the website in August 2016.

Jebran: We are passionate about this idea, but initially we were online looking for a guide that is already doing what Chicago in Arabic is today. We just couldn’t find one. Our own families were our greatest inspiration behind this concept. To be honest, my mom and my grandma, their English isn’t perfect and his parents, too. This started with us wanting our own parents to be more engaged with the city and built out from there.

Borderless: Where does most of the content come from?

Jebran: So many sources. We love the Chicago Parks website, but also platforms like Meetup.com. Local news sites such as the Chicago Reader and DNAinfo we read for inspiration. We are also looking for contributors such as journalists, photographers, and videographers who can create unique content for our site.

Borderless: What kind of barrier does language pose when you come to Chicago as an Arabic-speaking immigrant or refugee?

Abdulsamad: When you come to Chicago with just average English, or maybe even nonexistent English, this language barrier can prevent you from integrating simply because you are not able to build relationships with non-Arabic speakers at first, or you can’t read content online to really know what’s going on. Chicago in Arabic helps our readers find content that will make them fall in love with Chicago, and hopefully find a few events or attractions to join.

Personally, I went to grad school in Chicago and I didn’t have any Arabic speakers in my close circle of friends. So, I had 20 or 30 American friends at school, and it was so great. My Arabic-speaking friends would always ask me, “How did you hear about this campsite?” or this thing, or that event. I always thought, “All my American friends knew about it, how did you not hear about?” This experience really let me in on the idea that unless you really build friendships with the larger Chicago community, or speak the language, it’s hard to know what’s going on. There’s a sort of barrier separating you and the city.

Jebran: We think language shouldn’t stop you from knowing our city, or enjoying all the social events going on here. For many recent Arabic-speaking immigrants and refugees, they feel more comfortable reading in Arabic, so our site essentially helps them learn more about local events in their native tongue. We are really proud to be the link between these two communities.

Borderless: The project is about building bridges between the Arabic-speaking community and the larger community in Chicago. Why is this important?

Abdulsamad: I really love Chicago and everything that’s happening here. To me, it’s a huge missed opportunity for someone to live in such an amazing city where so much is going on and not truly live it, you know? Some of the things that we miss most about Damascus were the events, but to be honest there were not as many things going on there as here in Chicago. You come here and just, wow, there are just so much many things to do. It’s such a bummer to think Arabic speakers may move to Chicago and not take advantage of that opportunity because of a language barrier.

Jebran: We want our community to be more engaged with the city, in turn creating greater variety in our new home. The more diverse the city is, the more powerful it is. That’s why we give them information about all the new businesses, the new startups, and we have even developed a guide about neighborhoods where we talk about each neighborhood in Chicago that includes restaurants and landmarks. We want them to be more engaged in the city and not to stay isolated. Isolation is never a good thing.

Borderless: What content trends have you noticed among your readers?

Abdulsamad: The weather! If we talk about extreme weather everything goes viral. They want to tag all their cousins back in Syria and brag about it.

Jebran: Our readers are big on kids’ activities and family-friendly events, too. Food is a big one too, such as new restaurants or new coffee shops. I would say top destinations around the city, or Chicago history are also very popular among our readers. We never talk about politics or religion though.

Borderless: Why no politics or religion?

Jebran: The big goal is to unite all the Arabic-speaking community with the larger Chicago community. Even within the Arabic-speaking community, we want more unity. Religion and politics always divide. With our own experience back home in Syria, we personally know people who were really good friends before 2011, and now all of a sudden because of politics they are fighting. Instead, Chicago in Arabic is about discussing history, culture, or just enjoy the city and humanity — the things that unite, not divide.

Abdulsamad: One thing that reassured us that this was the right thing to do was research into other Arabic-centric groups on Facebook. We looked at what caused conflicts in these groups and most of the time it was political posts on religion. We said ok, it’s so clear this is not the way to go. It just angers people, and it’s not what we are looking for with Chicago in Arabic.

Borderless: What have you found in Chicago that reminds you of Damascus?

Abdulsamad: Chicago is really different than Damascus. Damascus is very old, ancient really. While Chicago just had its 183th birthday, it’s Damascus’ 5,000th birthday. In terms of age or history, they are incomparable, but the street vibrancy reminds me of Damascus a bit. When you walk on the streets here it is similar to Damascus: full of people, life and commerce. Chicago, like Damascus, is not a suburban-style city. I find walking to work and using public transport are small reminders of life back home in Damascus.

Borderless: What do you love about living in Chicago?

Jebran: The parks are always a favorite. I’m so amazed by the number of parks. That’s something that Damascus lacks. I’m always amazed how green Chicago is.

Abdulsamad: For me it’s the history of Chicago. You know that feeling when you have learned something, and you can’t wait to share it. That’s how I feel about Chicago. I’m always walking with friends or family, I’ll say, “Did you know this building was here in this year,” or “When this was here the entire place didn’t exist.” You start telling stories about this place and it makes you feel like you belong.

Discover more about Chicago in Arabic online at ChicagoInArabic.com.