Jafra Saif on dance and growing up in Syria 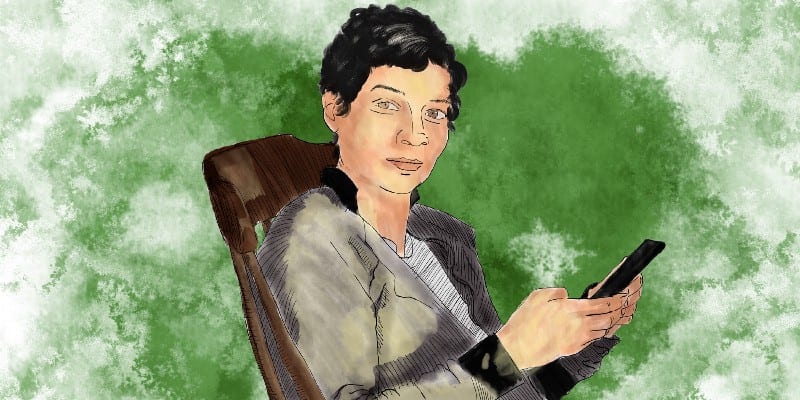 Tango dancer, log cabin builder, Syrian immigrant: Jafra Saif is anything but typical. She stood out in her native Aleppo, Syria where she was the child of a Sudanese father and a Syrian mother. Today, she stands out as a “brown immigrant” in northern Wisconsin, where she owns land, practices sustainable agriculture, and repairs log cabins for a living. Next month, she will apply for her U.S. citizenship after nearly five years living here as a permanent resident with a Sudanese passport.

Borderless caught up with Jafra on February 25 while she was in Chicago to dance tango, a passion she picked up in the dance schools of Damascus. She plans to visit Turkey for an international tango festival later this month, despite legal advice not leave the country.

Ah, Tango. It’s my everything. Tango gave me the space to express love and sadness at the same time. There’s this imaginary line between the two dancers’ chests that connects them, and they are free. It’s a connection where you feel everything is possible.

I am worried about not being able to get back into the United States, but I don’t care at all. Everything going on now with the immigration ban is a bit like what Marie Antoinette said, “Let them eat cake.”

But despite all of this, I have this tiny feeling where I don’t feel like I am targeted or alone anymore. I’m not alone as the brown immigrant; we are in this together now. I’ve never seen the middle class so angry in the United States. Sadness and anger, really deep, productive anger — not “I’m going to go destroy some shit” anger — can be so healthy. This situation should piss people off otherwise we are dead, numb.

I went to Minneapolis for the Women’s March, and oh my god, I got chills. You know, I was in demonstrations in Syria in 2011 and it was a totally different thing altogether. Why? When you grow up with this feeling that the walls have ears and they are coming to get you, and you know that normal people are employed to spy on you and keep you under control, that’s life under a dictatorship. Without an iron hand, it doesn’t function.

Then suddenly you were allowed in this very dangerous space that is a demonstration to express who you really are. For the first time, you were able to defend yourself. Before you were helpless. What most Americans don’t understand is that in Syria you were asked not just to submit, but to agree. You were not left alone if you didn’t agree to the system. You are asked to show love, to sing songs, to memorize speeches in school. When they speak, it doesn’t make sense. Because in the end, you know they want not just your fear, but your love.

It was hard to be in Syria. I was never connected to a place at any time, here, there, wherever. But you do miss the people, they are the only valuable thing in Syria. That’s what’s sad about what has happened. Syrian society is so broken now. We depended only on our community before. You get help and you give it back, but now everyone is under stress. Some people are really hungry because no one is there to feed them. They broke the only thing we had to protect ourselves.

It’s near to impossible to understand what is happening in Syria, but you have to have imagination, information, empathy, and a reasonable eye. You have to read history to know a dictatorship and what it means. You have to listen to the stories of survivors and believe them, because in the end it doesn’t make sense the stories we tell. It’s really hard to tell someone that we were under martial law for over 50 years, or that my neighbor could arrest my friends and I if we gathered in a group of more than five people. They don’t believe you.

If you don’t have laws on your side, nothing can protect you. “I didn’t mind the dictatorship,” this is what my grandmother would say. “The government was good. Syria was safe. What were you young people complaining about?” She doesn’t know that the education system was horrible. I couldn’t get a job. I couldn’t say anything. I can’t paint. I can’t move. I can’t speak. The system was so closed. We didn’t even have internet for a long time. In this century we had one television channel.

You could say, I was always different in Syria. I feel insecure because of the color of my skin. In Sudan I wasn’t the same, and in Syria I wasn’t the same. In Syria and in the entire third world really, we identify with the West for beauty standards. I never matched those beauty standards in Syria. I was darker than everyone, I was taller than everyone. I wanted to run in the streets with boys. I was poor in an area where women were starting to thinking about marriage by nine years old. By 16 years old, often they are married with children, when I was just riding my bike. I was called a boy, black, not beautiful because of my curly hair.

And I wasn’t the typical good girl. It started with my mom and dad. My mom was a revolutionary. For her to work, remove her hijab, and say my daughter has the right to decide what she wants, who she wants to love, whether to be in a relationship, to dance, and even ride my bike in the street. You can find freedom in Syria, but I was born into a community that was more socially conservative. Like my mom, my everyday life was an act of resistance. Walking in the street was a battle.

Aleppo was always more of a big town. Everyone knows everyone. You are not in Damascus, the capital of culture, you are in the capital of money, trade. I traveled Syria by walking, and I know Aleppo meter by a meter. I walked every meter of that city — the old city, the new city. It’s overwhelming to talk about it and tell you how it feels to see it destroyed now. It’s a surreal sadness. I fell under a deep depression a couple years ago. I was walking in the street in Wisconsin and someone said, “Hi,” and I started gushing in tears.

Then I was diagnosed with PTSD. I laughed hard when a therapist told me this. I was like, come on, I don’t have that. She said, “Well, you have all the symptoms: the numbness on the surface of your legs, your appetite problem, you feel miserable, depressed.” I had let go of life at that point.

In a way, I think all Syrians have PTSD. I think every single one. You are telling a person that you don’t have a home anymore, that you don’t belong anywhere, and still no one and no countries want you, and the world is fucked up. Your city, your memories are destroyed. Probably a few of your family members were killed, like every Syrian person has experienced. I have more than eight cousins who are dead. I’m so blessed that my mom didn’t drown in the ocean, or my brother, or my sister. It’s just knowing that the world can produce something like Syria.

Now, I’m living off the land. You could say, I’ve found peace in northern Wisconsin. I specialize in the repair of log cabins. Logs rot. They turn into mush so I cut into them and remove the rot. I design a piece of wood, scribe it, and put it back. It saves the house, eventually. I love it. I’ve been doing it for five years and it’s the longest thing I’ve stuck to in life.

Today, I own ten acres of land where I’m building my own house, planting vegetables. It’s home now. But, anywhere can be home. I don’t have to be in Syria to be at home anymore. Even in Syria, I felt like a stranger sometimes because of my personality, my dreams, what I wanted in life, being a woman.

Despite everything, Syrians want to go home. My mom for sure will go back. My stepdad doesn’t want to leave, and he is still in Syria. My brother is definitely going back. He’s in Germany and thinking about going to Turkey now, actually. But no matter what we go back to, it’s not the same. It’s a different approach to life, your job, your role there. Maybe I will go back. I think that’s what Syrian people need. They need a country to work on. I don’t think we will heal soon, but we need something to repair with our own hands.