Mahdia Lynn on creating a feminist and LGBTQ-affirming mosque

Masjid al-Rabia mosque held its first service less than a month after the election of President Trump and has found itself the target of both anti-Muslim and anti-LGBT groups. 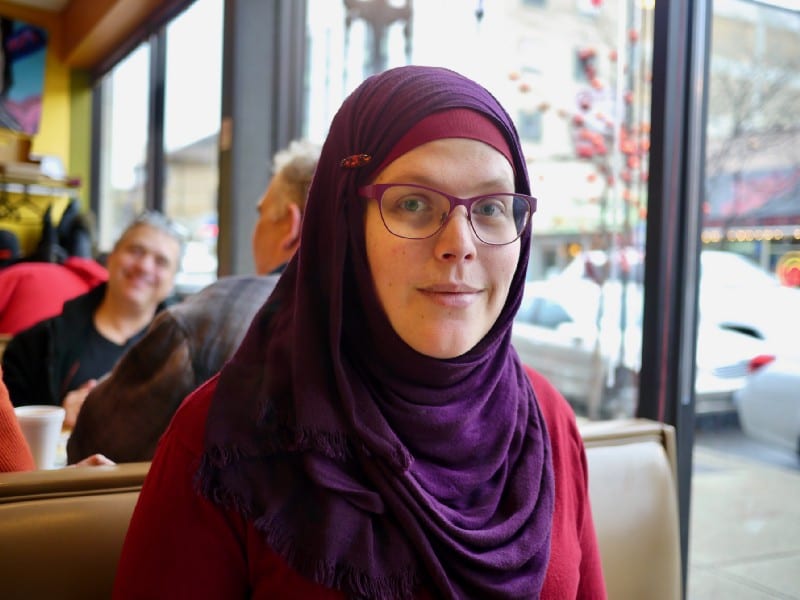 Masjid al-Rabia mosque held its first service less than a month after the election of President Trump and has found itself the target of both anti-Muslim and anti-LGBT groups.

Mahdia Lynn founded the Masjid al-Rabia mosque as a “women-centered, LGBT-affirming, trans inclusive, and pluralist” mosque in Chicago. The group held its first service less than a month after the election of President Trump and has found itself the target of both anti-Muslim and anti-LGBT groups.

Borderless sat down with Lynn to learn more about the mosque and its role in the Muslim immigrant community in Chicago.

Borderless: Where did the idea for Masjid al-Rabia come from?

Lynn: There is a long tradition of inclusive feminist and LGBT Muslim organizing in North America. With that said, this work really started in Chicago in 2014 when I started the Transgender Muslim Support Network out of my apartment. It was an online resource center and networking spot for transgender and gender diverse Muslims. At the same time that was happening, Chicago slowly began having a vibrant and growing Muslim LGBT community. And we came to recognize a need for a spiritual space for healing and emotional spiritual support. So at the end of 2015 we made a commitment that by the end of 2016 we’re going to have a prayer space to offer everyone. And on December 2, Masjid al-Rabia opened its doors.

Borderless: How many people belong to your community?

Lynn: We don’t document our membership for what might be obvious reasons. But a regular jum’ah service has between five and 20 people. We’re growing with almost every service. We’re probably a congregation of 50 people.

Our community is made up of immigrants and refugees. We have children of immigrants and refugees from the seven countries mentioned in the January 27 travel ban. We have people who have fled violence and genocide to be here and aren’t a part of those seven countries, but are being targeted because of the color of their skin and because of their faith. And there are also those of us who aren’t targets. Like I’m a white American Muslim and I have a European last name. I am not the target of state violence because Islamophobia is racism and xenophobia more than anything. As a white American Muslim, I have a responsibility to stand witness, interrupt, and help foster a safe space for all Muslims.

Borderless: In addition to being targeted by Islamophobic groups, your community has been persecuted by conservative Muslims who are against gay and trans people. In the face of this persecution, why do you and members of your congregation continue to practice your religion?

Lynn: I am a Muslim because I believe and practice Islam. If I were to change my faith because it was easier, that would be a lie. I can’t be anything but this because Islam is the truth and the light of my life. And there are others of us that feel that way too and understand that kernel of truth in Islam, not the Muslim boogeyman that the Right would have you think of. And not the hegemonic, monolithic Islam that the Wahhabis in Saudi Arabia would have you think of. But the real truth of Islam that’s about faith and justice and equality and doing good deeds in the face of injustice, that Islam we care far too much about it to even consider giving it up. This is a struggle that’s worthwhile because Islam is worth fighting for.

Borderless: Why do you think people should care about Muslim refugees?

Lynn: Because they are human beings. The Right is very invested in this mythic predatory immigrant that’s out to destroy America, which is not true. But if you look at immigrants through that lens then of course you’re going to keep them out.

It’s our duty as human beings to have some modicum of empathy, compassion, and humanity for these people. These are people who are fleeing violence that we can’t even imagine. And we’re turning them away because their skin is the wrong color or their last name is too frightening. We are denying the humanity of millions of people just for political points. This is our opportunity as Americans to affirm the humanity of these people and just let these people have dignity, life, and security.

The biggest victims of so-called Islamic state attacks are Muslims. And they are just trying to find some safety, security, and dignity. And the United States has decided that they’re not really human beings enough to warrant that tiniest bit of help.

Lynn: I would push back against the idea that America is inherently more LGBT affirming than Muslim majority countries. One of our most direct predecessors is a Qur’an school for trans people in Indonesia, a Muslim country. There are more female prime ministers in Muslim countries than the United States has ever seen presidents. So I would push back against the narrative that America is inherently safer for LGBT Muslims.

Chicago is uniquely suited to this organization. Masjid al-Rabia could not have happened anywhere else in the world. But as Americans, this kind of exclusionary violence and kind of racism and xenophobia is our inheritance. This is what this country is, this is what it’s always been. So it’s our duty to recognize that, name it for what it is, and do everything we can to make sure that that’s never the case again.