Finding a home in the Rohingya Culture Center 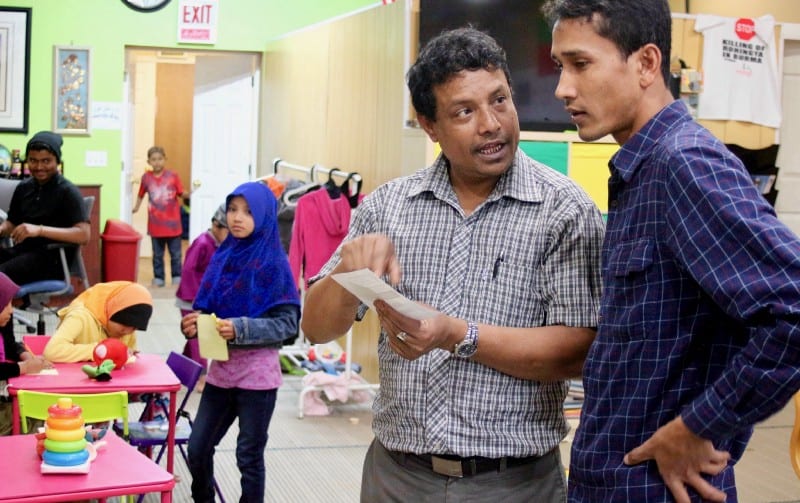 As a part of the Rohingya Muslim community — a persecuted ethnic group considered to be outsiders by the Buddhist majority in the southeast Asian nation— Zakaria was taken by the military for forced labor.

“It wasn’t just me that they singled out,” remembers the 40-year-old Bin Zakaria. “They took us all. Young, old, kids.”

Soldiers brought him into the jungle to serve as an indentured porter. From there he escaped first to Bangladesh, then Thailand, and finally to Malaysia.

“I was just looking for safety. I couldn’t find it anywhere, so I kept moving from country to country,” Bin Zakaria says. Life as a refugee meant existing without roots, says Bin Zakaria, and often living in slum conditions.

Today, Bin Zakaria has finally found a home in Chicago, where he lives with his family on the north side after their resettlement to the United States in 2013. He has become a fierce advocate for refugees as the director of the city’s Rohingya Culture Center, which is a home away from home for the thousand or so Rohingya living in the area. In addition to providing Arabic language classes and running a youth soccer team, the center teaches newly arrived immigrants English and helps students with their homework.

Education is the great American equalizer, says Bin Zakaria, and it’s something that many Rohingya were denied before coming to this country.

“We are not uneducated by choice,” explains Bin Zakaria over cups of warm brown tea at the tidy storefront center wedged between a halal market and an Islamic shop on the bustling South Asian corridor of Devon Avenue. Nearby, high school students study quietly and older men catch up on the day’s news.

“We were not allowed to go to school in Myanmar and in many other countries we fled to,” Bin Zakaria explains. “Even myself, I am just now learning to read and write in English.”

“We were denied education for so long by the Myanmar government. They killed our culture, our education, really they took everything from us,” says Bin Zakaria. “When you come from a country or even a second [host] country where you had nothing, you know the importance of education.”

According to the United Nations, the Rohingya are one of the world’s most oppressed minority groups and have faced systematic discrimination in Myanmar, a majority-Buddhist country, since 1962. The Myanmar government refuses to grant the Rohingya citizenship, and as a result many have no legal documentation, effectively making them stateless.

Hundreds of thousands of Rohingya have fled Myanmar since the late 1970s, according to data from the Council on Foreign Relations. Most ended up in nearby Bangladesh and Malaysia, and a small percentage eventually made it to the United States. Last year, 12,347 Rohingya refugees came to this country.

Many of these refugees struggle to adjust to life in the United States and to learn English, a challenge that inspired Bin Zakaria and other Rohingya community leaders here to found the Rohingya Culture Center last year. With seed funding from the Zakat Foundation, an Islamic nonprofit, the center opened its doors in April 2016.

For the first few months of operation, Bin Zakaria spent his days washing dishes at a local casino and nights volunteering at the center, where he would often sleep. It was just a small sacrifice, he says, to get the center off the ground.

Today, the center is a bustling space full of energetic children and adults who take advantage of the building’s computers, library of donated books, and toys. In one room, a group of ladies in fleece jackets and scarves covered with rhinestones take an evening adult English class. In another, a half dozen young girls wearing hijabs practice Arabic.

For adults frequenting the center, ESL classes, meetings to navigate American bureaucracy, potlucks, and movie nights help them find a sense of home in their new city. For kids, the center acts as a safe space for after-school homework help, ESL tutoring, and Islamic classes. Bin Zakaria says it’s all about carving out a space for the local Rohingya refugee community to speak the Rohingya language, practice their faith, and be themselves without fear or shame after years of persecution.

Abdul Shukar Ahmed Hussein, a 22-year-old college student, comes to the center for homework help and to see his friends. Hussein grew up as a refugee in Malaysia where he says he was barred from government schools.

“I always wanted to attend a regular school,” Hussein says. “I would dream about it, but it was unattainable in Malaysia. Here in America, even for undocumented people you can attend school.” Hussein says the volunteers at the center provide him the homework help he can’t find at home, as his parents were never formally educated. The center has also cemented his love for Chicago and Devon Avenue in particular. “The diversity and shops remind me so much of Malaysia,” he says.

Bin Zakaria says the community is flourishing, but the administration’s immigration ban in late January rattled the confidence of many. President Trump’s looming revised travel ban threatens to shatter the American dream for some who hoped to bring family members to the United States after they naturalize or to visit family abroad, he says.

“My dream coming to the United States was that once I have citizenship, I can finally go see my parents. Now, I worry about this a little bit,” say Bin Zakaria, who has not seen his family since his abduction as a teenager.

For now, however, the people who frequent the Rohingya Culture Center are Bin Zakaria’s family.

“This is our village now,” says Bin Zakaria. “It’s home.”

The Rohingya Culture Center, 2740 W. Devon Ave., is a nonprofit established committed to serve the educational, cultural and social needs of the newly resettled Rohingya refugees in Chicago.