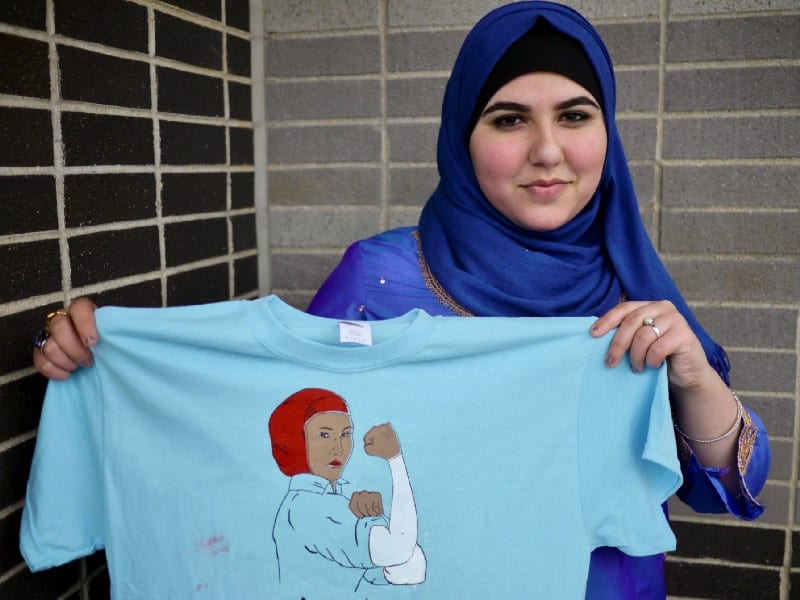 With the help of a friend, she designed a T-shirt that blended “American patriotism and my Muslim ideals of wearing the scarf to support Islamic feminism” and began to sell the shirt as a fundraiser for the Zakat Foundation, which supports Syrian refugees. The 130 copies she printed in January sold out quickly in the wake of President Trump’s immigration ban and she is now working with a professional printmaker to create more.

Borderless sat down with Afaneh to discuss her project and immigrant life in Chicago.

It’s hard to be an immigrant in Chicago, because at times you feel like you totally have to give in to being an American. You really want to adjust to the society the best you can because you want the same opportunities, same education. Sometimes it feels like there’s this clash of cultures and identities.

My grandma and her family were Palestinian refugees who escaped to Jordan during the war of 1967. Later, my grandma got married and had a new life in Jordan. It was too dangerous for her to go back to Palestine, where she wouldn’t be financially stable or safe. The whole family was denied access to the Palestinian borders, like many other refugees. So all my family lives in Jordan and my mom was born there along with my aunts. We’re very proud of our culture.

I was born in Germany when my mom was doing some work there. We decided to come over here when I was two. My grandma and my mom are big sources of inspiration for me. My mom raised me in this country when she was 25. And she came here with nothing on her back and only basic English. Now she has a PhD and she’s a professor. She’s taught me that anything is possible if I work hard.

I think a lot of people aren’t taught about Islam and what the hijab means. They look at the media and have this certain preconception that Muslim women are oppressed or Islam promotes violence or things like that. So being raised here, generally I’ve had a very positive experience. I’ve had lots of people come up to me and ask why I wear the hijab, and that’s great to have them be interested in my faith. But I’ve also had some bad experiences.

Once I was on the phone speaking in Arabic at a bus stop and there was this lady who kept looking at me. Finally she said, “Oh my god, ISIS is everywhere.” And that really hit me. I was in shock. I wasn’t sure if I should be laughing or crying. She assumed that just because my language was being spoken and I was wearing a scarf that I was a terrorist or promoting violence.

It’s important for people to really understand what is Islam is. Islam comes from the Arabic root salam, which means peace. So when someone says Islamic terrorism, I would hope people could see that that’s a huge oxymoron. Peaceful terrorism is a huge contradiction.

I wear the scarf because it’s a symbol of my modesty and of me being a Muslim woman. I like wearing it because people clearly see who I am. When they see me covered they see that I am choosing to desexualize myself from certain beauty standards. People really focus on my personality and my intelligence, which means a lot more to me than what my body could tell. So it’s a way for people to get to know me.

I started volunteering at Syrian refugee camps in Jordan in 2012, when I was in 7th grade. My aunts let me work with this organization called the Badr Society. They directly work with refugee camps in Jordan near the borders and other locations and assist in building houses and organizing food drives. We talk with the families and children and see exactly what they need and help them.

Sometimes we do simple barbecues and take the children to malls and buy them clothes, because they need their necessities but they also need a sense of happiness and emotional human connection, because they’ve lost a lot of that. Being able to work in the camps was eye opening. These are my people and they understand me so I wasn’t just this foreigner who was trying to help, they treated me like their daughter. So I was able to work with them, but also I was able to learn from them. I learned resilience, determination, and how to be grateful for things that you wouldn’t think about in your daily life.

While volunteering, I saw exactly how the limited resources are spent and how much more they need. There are times where we really want to help them out, but we don’t have the money. So I thought I should donate and try to make a difference. I’m not there in Jordan, but I still want to help out. So all of the funds from the T-shirts go to the National Zakat Foundation because the refugees right now need all of the money they can get, especially with President Trump’s travel ban.

The travel ban was discouraging because there are so many people who just want to come here because they have nowhere else to go. But I have to say that I’m surprised and overwhelmed at how willing people have been to help with that situation. At O’Hare airport, at the rallies, and at the protests, people are now educating themselves about Islam in order to help stop the executive order.