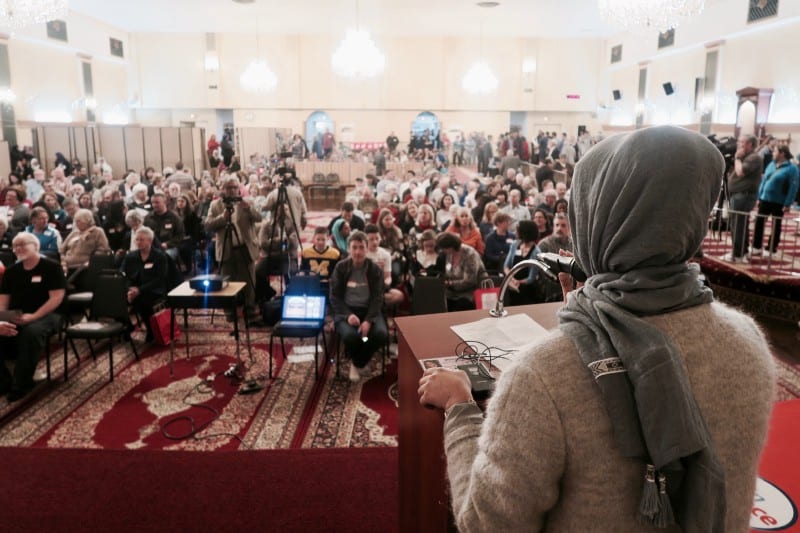 Muslim Community Center of Chicago opens its doors to neighbors

The Muslim Community Center of Chicago was established in 1969 and is one of the oldest and largest Muslim organizations in the Chicago area. On February 19, the MCC hosted its annual open house, which aims to dispel misconceptions about Islam and build inter-faith relationships with neighbors. More than a thousand people attended this year’s event — a testament to the growing concerns and curiosity of Chicagoans about Islam in the wake of Trump’s immigration ban. Borderless spoke with some of the people who came out about why they came.

“You can see the dignity of humanity in America,” says Mir Shamsubbin. “You can look at a lot of different countries, but that is the unique thing in America. We need to preserve this one example in the whole world that protects the dignity of human beings and love for each other. That’s a remarkable thing. The population of this country, there are so many different people, different religious groups, but we’re all united.”

“I think there is such a huge misperception of the Muslim faith. They are just regular people,” says Wendy Chill. “There’s always bad actors in every faith. I’m Jewish, there are bad actors that are Jewish and that are Christian. So it’s unfair that this particular faith is being singled out because of ignorance. I used to work for Planned Parenthood and some Christian folks would do bad things in the name of God. I would argue that most Christians would not agree that those people are representative of their entire faith.”

“We’re here to show that Girl Scouts, our Muslim Girl Scouts, are part of mainstream America,” says Belinda Tibayan, who serves as a troop leader. “We do the same activities that other troops do. We sell cookies and we do other service-based activities promoting confidence in these great girls. We still promote our faith, but we do other activities for girls too.”

“Now, more importantly than ever, we have to support the Muslim community,” says Carolynne Kent. “I hope people get an understanding of the Muslim population. Trump just wants to send fear into everyone’s heart, right? An event like this open house, it’s wonderful.”

“It’s just cool that people would open up for this kind of dialogue and discussion to get an understanding of things that are sometimes, for a lot of our culture, considered unknown,” says Chichi Okwu. “I like to see the good in people, but I think most people are seeing a lot of misinformation, or just have a fear of the unknown. I think a way to combat that is to engage with more people.”

“Today, 75 years ago, was a dark day when our president issued an executive order and put American citizens of Japanese origin into concentration camps. And I started feeling, is history repeating? Is this the same kind of thing with another president issuing an executive order?” asks Mohammad Sarwar Nasir, president of the MCC. “But then when we see a sea of people coming here and speaking in support of all human rights, then we say, ‘It is not going to happen.’”