Hadia Zarzour on living two lives in Chicago and Syria

Hadia Zarzour is a licensed clinical professional counselor and co-founder of the Syrian Community Network, a nonprofit determined to aid and assist resettled Syrian refugees as they build new lives in the United States. 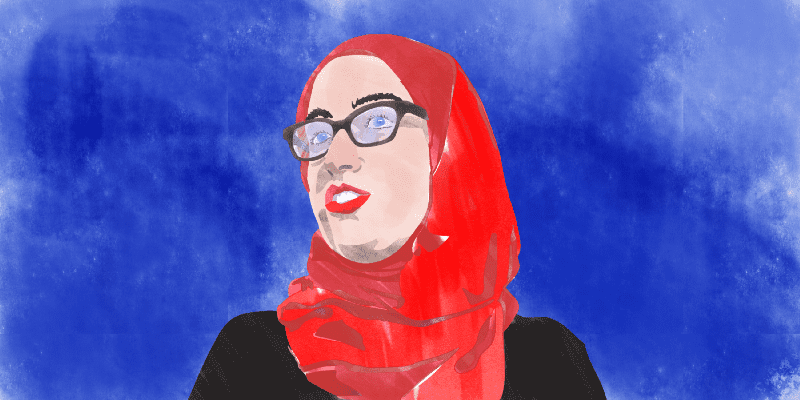 Hadia Zarzour is a licensed clinical professional counselor and co-founder of the Syrian Community Network, a nonprofit determined to aid and assist resettled Syrian refugees as they build new lives in the United States.

Hadia Zarzour is a licensed clinical professional counselor and co-founder of the Syrian Community Network, a nonprofit determined to aid and assist resettled Syrian refugees as they build new lives in the United States. Hadia taught Introduction to Psychology to university students in Damascus. She is also a co-founder of Insan, a nonprofit organization founded in 2012 with the purpose of providing psychological support to Syrian children and adults in Turkey, Jordan and Lebanon.

Hadia talked about life, therapy and memories with Borderless on February 20, shortly before President Trump was expected to issue a new travel ban for Syrians. She shared her experiences as a therapist for refugees and finding her second home in Chicago.

I love when you run into people unexpectedly in Chicago. It makes you feel like you have roots here. In Damascus I was always running into my students and friends all over the city. Typical of a teacher, right? Syria was always home, but then Chicago unexpectedly became home, too.

When you lose your roots, you feel that a part of the history of who you are is gone. I see this in the refugee families here and in myself. I think that’s why I still hold on to Syria. Damascus is a big city, but at the same time in my heart it felt small. There was something intimate and real about Damascus.

I came to Chicago in 2009 for my master’s. I was the first Fulbright scholar in Syria with a focus on counseling psychology, and my plan was to complete my program then return to open a counseling center at the Arab International University in Damascus. I was just a few months shy of my degree when the revolution started in 2011.

To be honest, there’s a kind of stigma against studying psychology and pursuing a career in counseling in Syria. I always approached therapy from this desire to help people with their problems. Maybe it was an idealistic way to look at the world as a student, but I always felt I could handle and carry the weight of helping people work through their trauma. Syrians in general don’t talk about individual feelings. If you spend time around Syrians, you will notice we say “we” a lot. I think this is indicative of how we think about the group, not the individual. In the end, it’s all about community.

Therapy is all about expression and that means talking, and often talking about feelings translates to weakness. Appearing weak is hard. I’ve worked with other refugee communities in Chicago for four years, but now I am focused on working with resettled Syrian refugees. I meet these refugee families where they are both emotionally and physically. Sometimes we do group therapy to discuss shared experiences, but most of my therapy is through case management with Syrian Community Network. For refugees wary of therapy, you develop alternate routes for sharing feelings. Questions about depression take form in discussions on sleep patterns, back pain, headaches, maybe memories. It’s a conversation where you never dive straight in. It’s about an unspoken language and what’s hidden.

We focus on meeting their basic needs, too. Safety in the neighborhoods where families are placed by resettlement agencies is an issue. Imagine that a mother survived the Ghouta chemical attack in 2013, losing a husband and a son, and then is living in a neighborhood with shootings. She survived a chemical attack with four children, but here she is being re-traumatized by Chicago’s gun violence.

Domestic violence, suicide attempts, sometimes just the stress of moving to the United States and starting a new life are all issues, too. I think the hardest moment for me as a therapist was standing at the side of a Syrian mother when she lost her baby in the hospital just after he was born. It’s finding this balance of working through the trauma and helping them place roots in a new home.

Today, I’m starting to worry about my own roots in Syria. I feel like slowly my connections to the country are disappearing. My whole life in Syria, despite the pressure throughout our lives, felt like it was leading up to this moment of freedom. Being away during the beginning of the revolution felt like in some weird way that I missed seeing the few moments of freedom that as a child I discovered in the contraband books my father would hide behind other books in our home library. I lived my life waiting for this moment of change, and now that feels gone. I missed the honor of being on the streets of Damascus with other courageous peaceful protestors.

But then I think, what is Syria anyway? It really breaks my heart when I think about that. In the end, it’s really just people. It is a symbol. It is a home. But now, Chicago is a home, too. When I walk on the street, I feel like I belong to Chicago, but it is one of two lives. It’s a little like life after death. I feel like I moved from my Syrian life to my American life, and everything is gone, except my family. But when you talk about what’s going on in Syria, or memories from your life there, I’m almost connecting my two worlds.