Suzanne Akhras Sahloul is the founder and executive director of the Syrian Community Network, which helps Syrian refugees make a new home in the Chicago area. 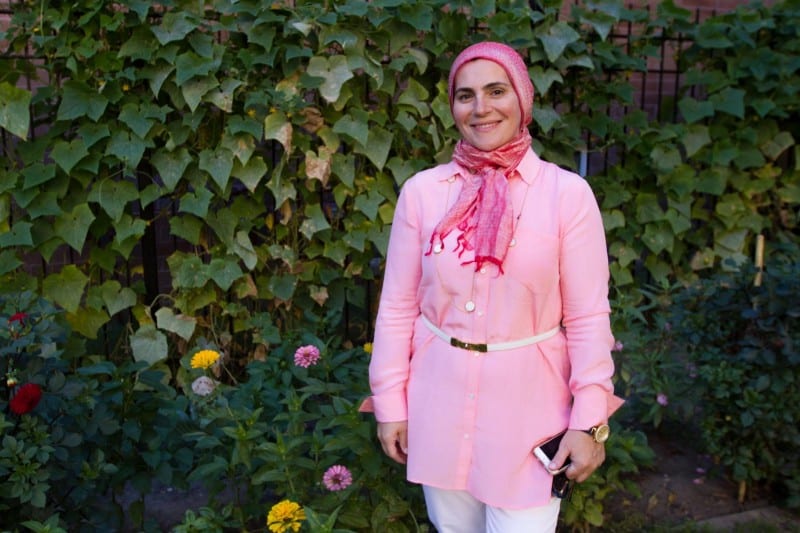 Suzanne Akhras Sahloul is the founder and executive director of the Syrian Community Network, which helps Syrian refugees make a new home in the Chicago area.

Suzanne Akhras Sahloul is the founder and executive director of the Syrian Community Network, which helps Syrian refugees make a new home in the Chicago area. Akhras Sahloul was born in Homs — Syria’s third largest city — and came to the United States at 10 years old. She represented the Syrian American community at the U.S. Department of State’s Global Diaspora Forum in 2011 and 2013.

SCN counts 140 Syrian refugee families, close to 600 individuals, now living in the greater Chicago area. Illinois took in 10,864 refugees from the seven countries specified in President Trump’s January 27 order since 2007. About half of these refugees settled in Chicago, while hundreds of others found homes in the west and north suburbs. Chicago Ideas Week ranked SCN as one of 7 Chicago-Based Organizations that Are Changing the City for the Better.

Borderless: What do people need to know about the Syrian refugee situation?

Sahloul: Since 2011, we have been witnessing the worst humanitarian disaster of our lifetime. Over 4.8 million Syrian refugees have registered with the UNHCR [the UN refugee agency] and there are another 3 million who are unregistered and another 2 million who are internally displaced. That means that half of Syria’s population is displaced.

This is the most documented refugee crisis in history, yet still the world did not react for a long time. It took little Alan Kurdi to be washed up ashore [in 2015] for the world to start paying attention. We had an amazing response here in Chicago. People wanted to help; it was really incredible. But then the Paris attack happened in [November 2015] and again Syrian refugees were portrayed in a negative light.

When refugees are connected with ISIS and the trouble of this war, we are making them responsible for a war they fled as civilians. These refugees are not responsible for what has happened in Syria. In most cases, they had to flee their homes with nothing but the shirts on their backs.

Borderless: How have Syrian refugees been treated outside of the United States?

Sahloul: If you look at history, Syria received refugees from many conflicts: Armenians, Jews during World War II, Lebanese, Iraqis, and Somalis. Everyone has been welcomed in Syria throughout the years and especially during times of war. But today, you find this terrible treatment of Syrians in nearby countries, such as Jordan and Lebanon, where they often live without services and housing in real abject poverty.

Sahloul: Some of the families feel scared, because there is a rumor that the refugees who are here will be revetted all over again. The families also feel they are being unfairly targeted. What did they do to receive this unfair treatment? They just want to focus on learning English, securing a job, paying their rent on time, and making sure their children go to school. They are no different than you or me.

Borderless: Why should the United States help Syrian refugees?

Sahloul: The United States is only country in the world that can absorb large numbers of displaced people. Syrian refugees also have something to add to the social fabric of the United States. They are educated, hardworking, entrepreneurial, and there is already a pre-established community within this country to help them.

The Syrian Community Network started with this idea that the Syrian American community here can provide and shelter newcomers. Today, a lot of cities are doing the same as Chicago. People often say that refugees are coming to live off the system, but looking at our organization you can see that we take care of our own. SCN is 100 percent funded by the community. For instance, we helped 95 families with rent in the past year and a half through $200,000 in donations from the community alone. These refugees are not a burden on anyone, they are a blessing.

But when we look at the United States’ capacity to help Syrian refugees, this is a crisis that did not begin with Trump. It started with Obama, who I truly blame for this situation. He agreed to let in 10,000 Syrian refugees out of five million displaced. In terms of numbers and magnitude of scope, it’s nothing. Everyone hails him as one of the greatest presidents, but on the international scene he was a weak president. He failed the Syrian people and their children. Look at Aleppo, and you will see that this is all the proof you need.

Sahloul: The Syrian Community Network has chapters throughout the United States and our volunteers are of every nationality and religion: Muslims, non-Muslim, Jewish, Catholic, Presbyterian, non-denominational. It’s strange and heartwarming to see all these people give two or three hours a week to a family who lost everything because of the war in Syria.

In my mind, this type of volunteerism is a testament to the goodness of the American people of all faiths and identities. You can see communities are really stepping up to welcome Syrian refugees. For every terrible comment against refugees we get online, we get hundreds of volunteers ready to put their beliefs to action.

This interview has been condensed and edited for clarity.