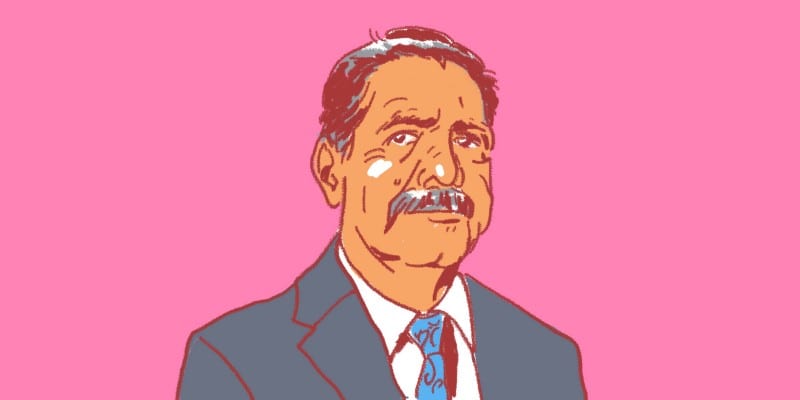 Earlier this year Jesús “Chuy” García scored a victory in the Democratic primary for Illinois’ lone Latinx-majority congressional seat. Born in a village in Durango, Mexico, if he’s elected to the seat of retiring U.S. Rep. Luis Gutierrez in November he’ll be the first Mexican-American to represent Illinois in Congress. García’s been a Cook County commissioner representing the Southwest Side for the past seven years and forced a runoff mayoral election in 2015 between himself and incumbent Rahm Emanuel. García spoke to Borderless about his personal connection to La Villita and what he sees as its future.

My father came to the U.S. in the late 1940s. He first came through the bracero program to do work in the fields, agriculture. He did that in Texas and California. At some point the program or his status expired so he wound up undocumented. He went from the Southwest to Kansas and then to Chicago. He worked his way up here because he learned there were better paying jobs in Chicago and that there were people here from Durango. That’s where we’re from. Relatives who were living here already also encouraged him to come to Chicago.

So he came and got his residency established in about 1964. After he became a resident he was able to send for us. We came in 1965 when there was a growing Mexican immigrant community in Chicago.

We first arrived in Pilsen and it was February. I was nine years old, going on ten at the time, and I remember the hardship of leaving my dog. Leaving my almost brand-new bike that my father had brought me the prior Christmas. I remember the morning we left vividly. Getting on the bus and feeling so sad and so empty. It was still dark outside. The bus took us to the train station in the Tepehuanes Municipality in Durango.

My next memory was of crossing the border and eating my first bologna sandwich at a gas station in El Paso while we were fueling up. I remember my two sisters and brother did not like the bologna sandwich. But I liked it. My Tío Chuy, who came to pick us up to transport us to Chicago from Texas, told me, “You like that bologna sandwich? You’re going to do great in the U.S.” And he was right.

We arrived in Chicago a day-and-a-half later. I remember it was freezing. I had never seen snow before, so seeing a winter wonderland from the highway was quite an experience. Stepping out of the station wagon that we were in on Allport Street, on 16th and Allport, was a real cultural shock. I had a small jacket. I remember the wind just came through it. Just cutting to the bone, so to speak. That was my welcome to Chicago in February of ’65. The Hawk at its worst.

I used to catch the 26th Street bus to Western and then another bus down to 63rd Street to get to Saint Rita High School. I remember walking down 26th Street and seeing it changing before my very eyes. There were a lot of Czech and Polish businesses — bakeries, restaurants, and delis — that had boarded up storefronts at that time. The neighborhood was was in transition.

And you saw that transition playing out on 26th Street business-wise, but you also saw it on the residential blocks. We were like the first Mexican family on 28th and Pulaski. Within four years it was probably eighty percent Mexican. It happened that fast. I remember older folks complaining about the change, that “these people” have too many kids and the kids are running around. They’re stepping on our lawns.

Some of my most fond memories include getting my first car when I was in high school. My brother bought me a car. It was a big Oldsmobile. We called it The Wolf Mobile and we used to like to buy little cigars, Wolf Brothers Cigars, and cruise around in the car smoking a cigar. That’s why we called it The Wolf Mobile. I have fond memories of just cruising up and down 26th Street in this gas guzzler feeling just great about adolescence and growing up and being able to have your own car.

Later, I remember cruising down the street with a newer car. This was after I graduated, like 1974, when I worked at Brach’s Confections. Driving down 26th Street with my Malibu with rims on it. This was after a couple of paychecks. With my girlfriend in the car, jamming to my big 8-track tapes that I bought at Maxwell Street with some of the latest hits on them. It was soul music, R&B. Just cruising down 26th Street back and forth listening to the jams and feeling all proud and having a pretty girlfriend driving with me. She turned out to be my wife.

So you saw the transition in the neighborhood and some of the tension from that played out with people in stores and the street speaking Spanish while other people told them to “Speak English.”

One of the great places to see that transition playing out was at the former Atlantic Theater, near 26th and Pulaski. Today it’s the Atlantic Mall. That was a theater where we would go see English movies, which were American movies, of course. But they were in English, and they had Spanish language movies there at the same time. You still had some of the old, longtime residents going to see the English movies. Mexicans going to see the Spanish-language movies. And then the younger Mexican-Americans going to both because they were bilingual.

I remember some of the first movies that I saw there were some of the blaxploitation movies, “Shaft” and “Superfly,” and some of those other movies. The guys going into the movies with their girlfriends would try to dress up like the artists of the day, the lead actor. It was a great moment.

Interestingly enough, it was the Atlantic Theater where I sort of got my start in organizing. When I took my girlfriend to the movies there for the first time, I was already in college. We had a rat encounter, people jumping on top of the seats, which lead to my becoming upset enough to try to do something about it. We organized a picket line. We got the owners of the theater to fix it up and clean it up.

I also remember my parents sending me to buy tortillas and walking all the way from 2852 S. Pulaski to La Justicia at 26th and Millard just to get four dozen tortillas. It was the only place that had them, or the closest to us at any rate. I remember walking at least twice a week to get tortillas. And that’s where I learned who Lupe Martinez was, the owner of La Justicia, who later ran for alderman. We were opponents in that race.

He was sort of hooked up with the local powers, the neighborhood powers like the alderman and the chamber of commerce at that time. The Little Village Community Council. The local newspaper essentially was owned by the alderman. These were all experiences that taught me who the power players were and who I would wind up challenging to open it up for the election of Latinos and Latinas as we moved forward.

By the time I was elected alderman in 1986, I had paraded down 26th Street as an elected official, as the first “mexicano” alderman in the community. That’s what drove the conversation about what we could do to make 26th Street stand out. When people go to Chinatown, the arch that they have there was an icon. “That’s Chinatown!” We thought, “What can we build here?” From those conversations came the concept of the 26th Street arch. We talked to the city about the concept. We discussed it with the architect who also designed the National Museum of Mexican Art.

The biggest critics when the arch started going up, or most of my friends and the folks in my circles, said “Why are you building such an expensive monument there when you could be feeding people, clothing people? Social services?” Well you can’t use this money for those things. It was for street-scaping, for commercial area improvement.

Ironically, only a few years later, a lot of my nonprofit friends who had made that critique started putting the arch on their letterheads and their promotional materials. It did become that instant icon where you know you’re in Little Village. Musical groups put it on their new CD releases, their cassettes at that time. It’s been wonderful.

This is kind of the heart of Mexican community in the Midwest and people come from all over for the Mexican Independence parade or even just for a Sunday visit. States as far as Minnesota, Nebraska, and Mississippi. They drive down to 26th Street to eat, to just feel and smell and listen to all the sounds and sights and flavors of the community. It’s still that experience. Of course it sort of culminates with the Mexican Independence Parade.

As I look at what’s going on in the city, I’m concerned about the future of neighborhoods that immigrants have built, have reinvented, and have redefined. They made these communities very livable and they’re facing challenges in their ability to stay in these communities. We’ve seen it happen to a good part of Pilsen. The concern is that it’s not repeated in Little Village.

I think it’s important that the city be a really diverse place for all people who want to continue to live there. That’s my worry as I approach my fiftieth anniversary in Little Village.

Nationally, it’s very tragic to have people in the highest levels of power seeking to paint a false image and reality of immigrant communities that have brought so much vitality across the country, across Illinois, across the metro area. If it weren’t for immigrants and Latinas and Latinos, there wouldn’t be the type of vibrancy that you see in commercial arteries all over the metro area.

You also see it on the greater Southwest Side, the vitality of hardworking, entrepreneurial people wanting to send their kids to colleges and universities, integrating into society and having so many positive impacts across the land.

I’m hoping that this false narrative, this twisted distortion, projection, of a community is just a passing moment in our history. I think the community has the resiliency, the staying power, to overcome that. I think that when this passes, and I don’t know how much longer it will last, that it will be a part of a renaissance that puts the country in a better place as it relates to racial minorities, as it relates to women and the #MeToo phenomenon that is sweeping the country. The experience of the Muslim community.

We have to endure this difficult period, but those are really the contrasts that need to be examined.