Sargon Gabriel plays over a loudspeaker outside while a group of men in their thirties clad in leather motorcycle vests assemble rice, eggs, ground beef, fruits and vegetables into twenty boxes.

Jokes abound, burgers flip, and someone reminds Sarkis Jandou that the milk is still in the car.

This is no ordinary picnic. Since April 21 the nonprofit motorcycle club, the Assyrian Knights, has been meeting in their backyards to pack up food for elderly members of the Assyrian community who have limited access to food due to the COVID-19 pandemic. Since the stay-at-home order took effect the club has raised over $9,500 and helped 187 Assyrian families by delivering care packages. 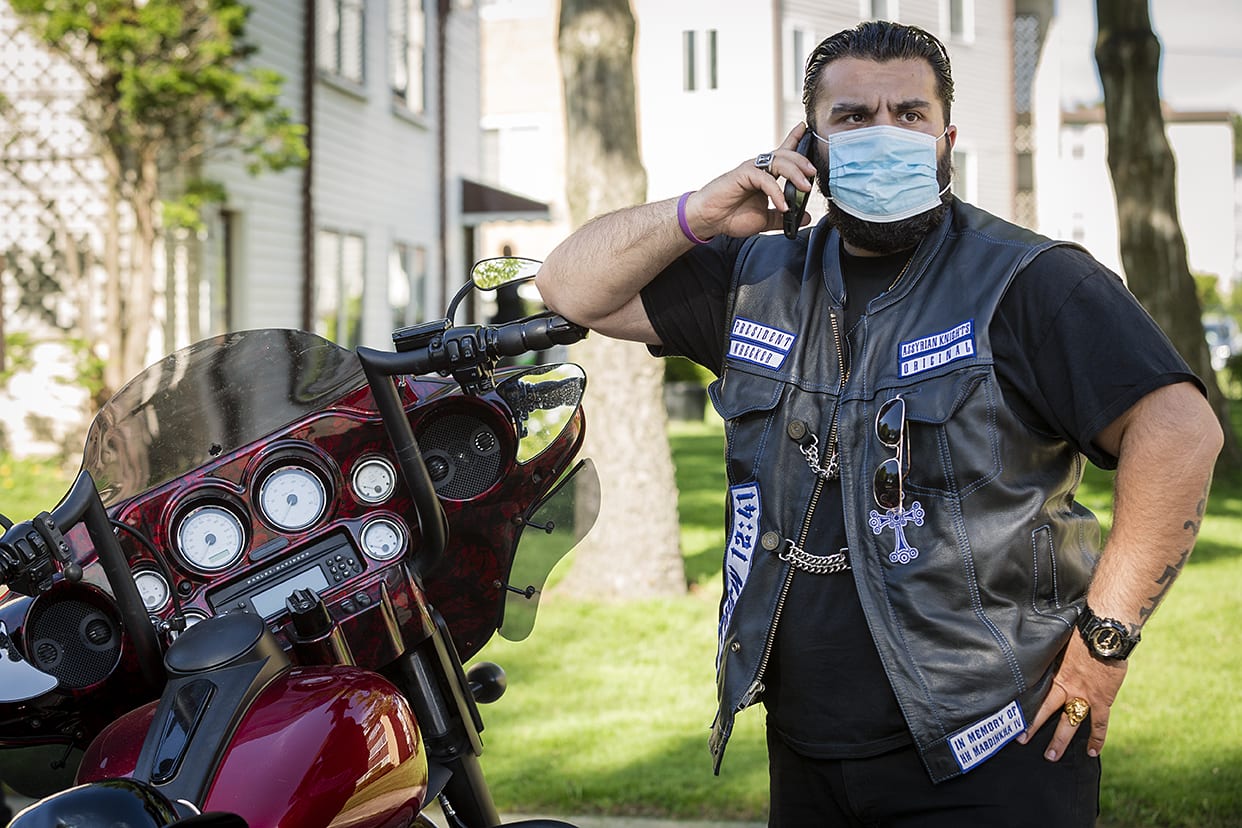 President of the Assyrian Knights, Sarkis Jandou, organizes the delivery of groceries to 10 different Assyrian families May 20, 2020 around Skokie and Niles, Ill. Michelle Kanaar/Borderless Magazine

“I call it a hybrid between the motorcycle world and the Assyrian community,” says Jandou, president of the Assyrian Knights.

Jandou co-founded the club with four other men in late August 2019 with the goal of bringing together Assyrians in the Chicago area and giving back to the community. Before the pandemic they occasionally gave out food and toys. But COVID-19 has provided a new urgency to their work.

“We knew we needed to help the people that can’t afford it right now, that have no help,” Jandou said.

The club saw people struggling and was unsure when government assistance like the stimulus checks would arrive.

“So the plan was to help families, get them food, just get them to get by,” he said.

Bibi Sheeba lives with her daughter-in-law and three grandchildren in Chicago’s West Ridge neighborhood. She was filled with gratitude when the Assyrian Knights delivered a care package to her on April 25.

“I was happy to see them and grateful for the food they gave to help us,” Sheeba said in Assyrian. “I was even more happy for their visit and their kind words asking us how we are doing, smiling, very kind.”

Many older Assyrians in Chicago like Sheeba, speak Assyrian and very little English. That language barrier has been a challenge during the pandemic as health guidelines and rules are updated frequently. 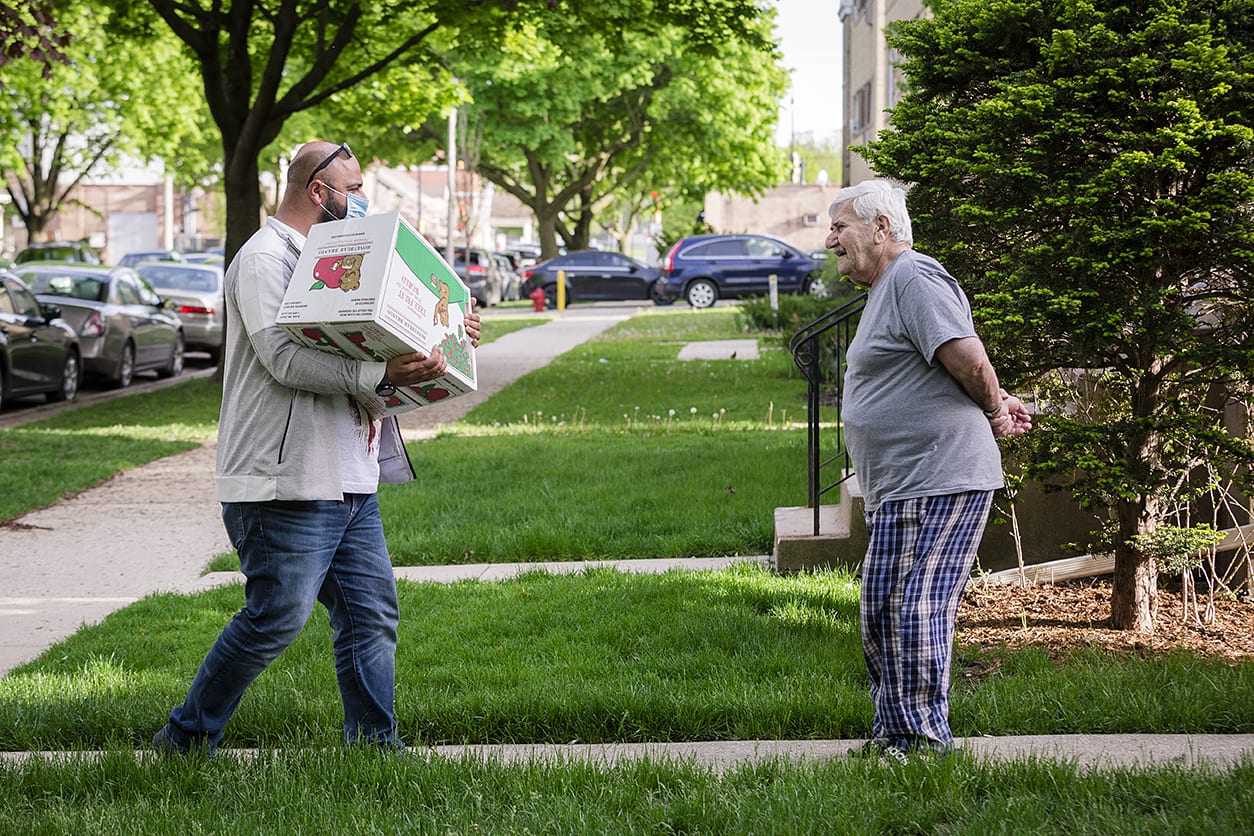 The Chicago Mayor’s office has translated its guidelines into seven languages, including Spanish and two dialects of Chinese, but has no guidelines in Assyrian. Similarly, the Centers for Disease Control and Prevention offers COVID-19 prevention tip sheets in over 60 languages but Assyrian isn’t one of them.

Assyrian community leaders estimate there are close to 100,000 Assyrians in Illinois who mostly live in the Chicago area.

They’re one of the indigenous, ethnolinguistic populations of modern-day Iraq. Thousands of Assyrians have migrated and settled across the world following persecution in their homeland during the Ba’ath Arabization campaign that began in the 1970s and then during more recent activities of the Iraq War and conflict with ISIS.

Organizations that would normally help take care of elderly community members and ease language challenges, like the Assyrian National Council of Illinois, have had to reduce some of their services during the COVID-19 pandemic.

ANCI would regularly have home care aides visit seniors before the pandemic to assist with personal hygiene, meal preparation and doctor visits. But now a number of aides are scared to enter the homes and some elders are calling and asking ANCI not to send aides to their homes in fear of contracting the COVID-19 from them, said ANCI supervisor Steve Marano.

“A lot of them are not understanding what’s going on. We get a lot of questions when we call them,” said Marano.

A Community Steps Up 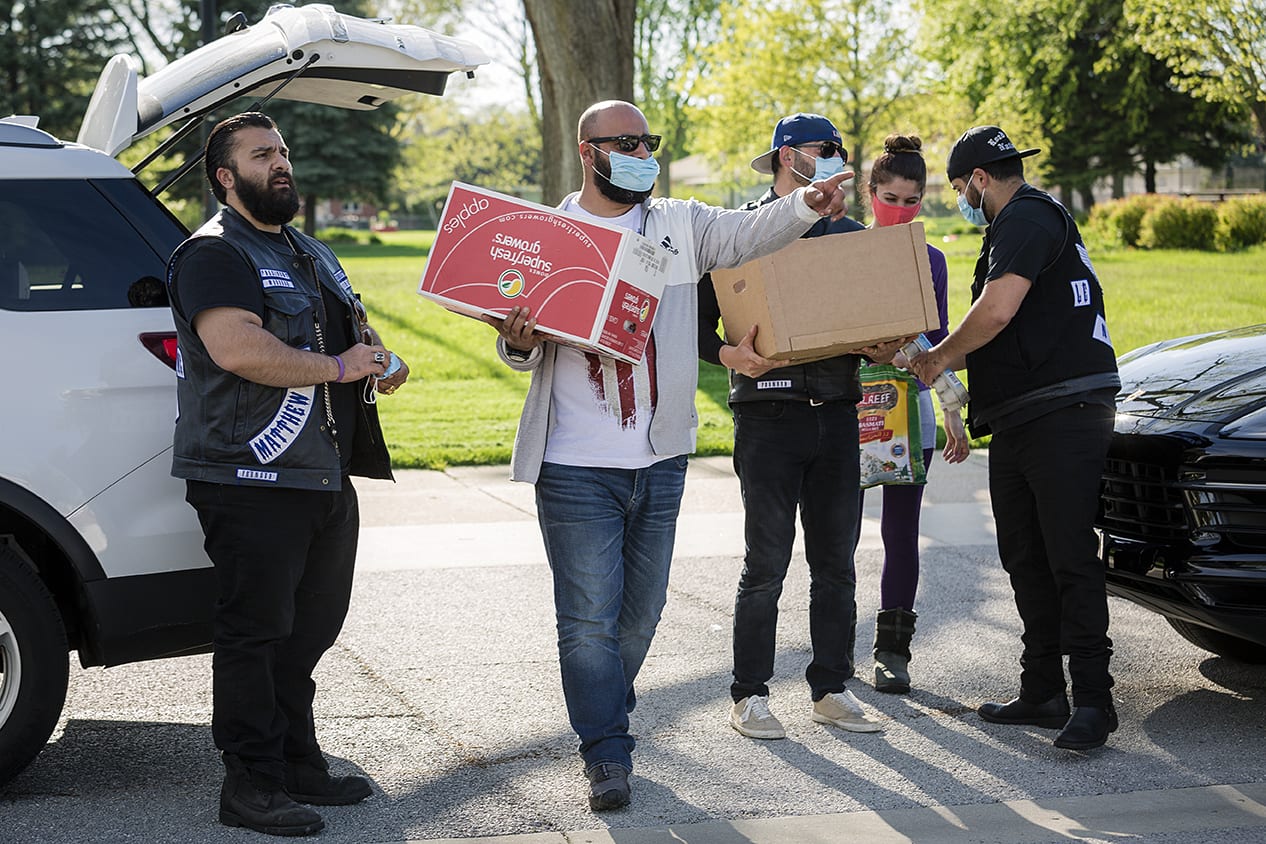 Assyrian Knights and volunteers, Sarkis Jandou, Daniel Alexander, Ashor Daniel, Linda Zaia and Mark Adam deliver groceries to 10 different Assyrian families May 20, 2020 around Skokie and Niles, Ill. Assyrian community leaders estimate that there are close to 100,000 Assyrians in Illinois, most of whom live in the Chicago area. Michelle Kanaar/Borderless Magazine

Jandou and another member, Peter Abraham, decided delivering food to the elderly would be a good idea while brainstorming ideas in a Skokie Dunkin’ Donuts in April.

The problem was most of the club’s members had lost their jobs in the pandemic. Funding the project themselves was not an option and they started talking about how to raise money to pay for the food packages. While discussing their fundraising options, Daniel Alexander, another local Assyrian, overheard them and offered to help. Ultimately, Alexander would fund the group’s first trip to the grocery store because he believed the club could help the community.

“People are struggling to get by day-by-day, living paycheck-to-paycheck,” said Alexander.

On April 19 the group uploaded a video to their Instagram and Facebook accounts asking families who need help putting food on the table to reach out to them.

At first the group had a hard time getting families to sign up for packages from the motorcycle club.

“The cliche is you know, we’re the ‘bad guys.’ We’re the troublemakers,” said Abraham. 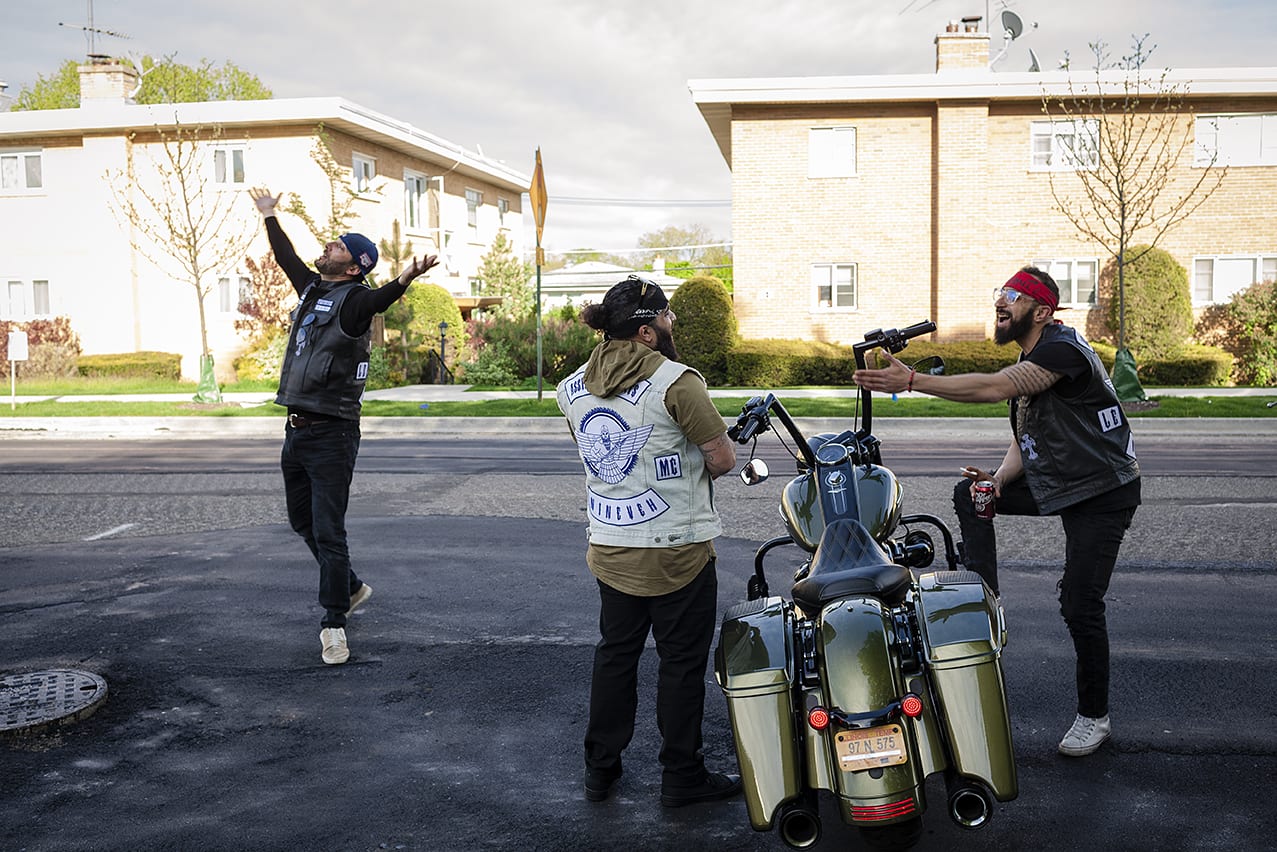 But as the community learned more about the club’s members helping people out suddenly a bunch of men dressed in leather with beards riding loud motorcycles didn’t seem so intimidating, Abraham said.

“When we come delivering food, I definitely do believe it changes their mindset,” said Abraham.

The emblem of King Ashur can be found on every Assyrian flag. The club also has it on their jackets which helps as an icebreaker when introducing themselves to other Assyrians.

“When they see that symbol, it’s like ‘Oh, they are Assyrian.’ We get that a lot, too. ‘We didn’t know you were Assyrian and then we saw King Ashur and knew you were,” Jandou said. 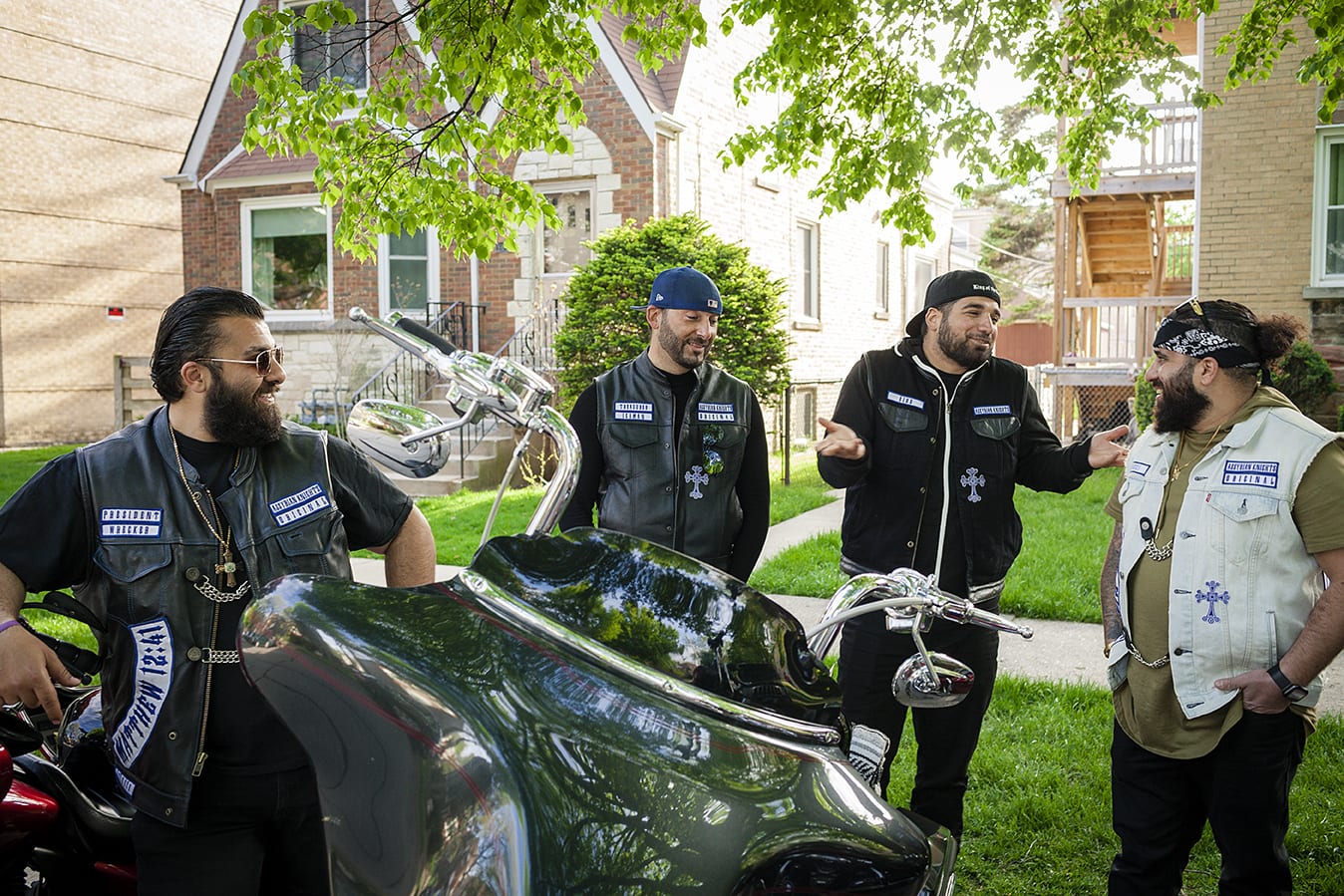 On April 21, the Knights made their first run for six families thanks to Alexander’s funding. They posted pictures on their social media accounts afterwards of the club assembling the care packages and making the deliveries.

“It went wild. People left and right were messaging us and commenting, calling, ‘Hey, we want to donate. How can we help?’” Jandou said.

The club decided to start a GoFundMe campaign that same night. By the next morning it had met its initial $5,000 goal.

As requests steadily poured in during the first few weeks of deliveries, the club continued to increase their fundraising goal to keep funding them.

As of Thursday, the GoFundMe campaign has raised nearly $10,000 from 85 people.

Jandou receives most of the requests for help from families directly to his phone. The club has helped over 180 families and he hopes people keep donating to the GoFundMe so they can keep making deliveries to people who need food.

“We want to do this until there’s no more calls,” Jandou said.

Anyone interested in donating to the Assyrian Knights’ effort can do so through their GoFundMe campaign. Those interested in receiving a care package can reach the group by messaging them on their Facebook page.

‘Solito’ by Javier Zamora: An Excerpt from the Best-Selling Memoir
Artist Remembers Migrants Who Died on Their Journey North
Chicago Writer Erika L. Sánchez Gets Personal in New Memoir
Author Viet Thanh Nguyen on Being a Refugee and Storyteller
How the Border Patrol Became America’s “Most Dangerous Police Force”
A Mini World Cup Celebrates Refugees in Chicago