After being stripped of his nationality, one Rohingya refugee finds hope in the 2020 census

Above: Abdul Jabbar pictured at the Rohingya Cultural Center in West Ridge on August 28, 2019. Photo by Max Herman.

The 2020 census is more than just a headcount. Census data is used to allocate more than $675 billion in federal funds each year for services like schools and hospitals. Many immigrant communities are at risk of being undercounted due to language barriers, a lack of familiarity with what the census is and a rise in anti-immigrant rhetoric, according to advocates at the Illinois Coalition for Immigrant and Refugee Rights.

Refugees are especially vulnerable to undercounting, says Jims Porter, policy and communications manager at RefugeeOne, which is organizing the city’s first refugee complete count committee for the 2020 census to ensure a full count. “Refugees come to the U.S. with legal permanent residency but still, there is confusion over whether they should participate in the census or not,” explains Porter.

In Chicago, one focus of census organizing with refugees has been the Rohingya community, one of the largest in the United States. The United Nations considers the Rohingya as “the most persecuted minority in the world.” Over 742,000 Rohingya refugees have fled violence in Myanmar and gone to Bangladesh since August 2017, according to the UNHCR.

Borderless Magazine’s Sarah Conway spoke with Abdul Jabbar, a case manager at the Rohingya Cultural Center in West Ridge on Chicago’s North Side. Jabbar recalled his experiences with the census back in Myanmar, where Rohingya are not allowed to identify as Rohingya on census forms, and what the upcoming 2020 Census means to him today.

Every year, Burmese government officials would come house by house and village by village to count everyone. It was a moment of fear for many ethnic minorities because If you were present at home, your name would be marked in gray but if you were in exile abroad, you would be marked in red and this would start the process of having your nationality stripped. I was marked in red ink in 1996, at age 12, and removed from the list because I sought safety in Malaysia. It means that I can never go back to Myanmar. My mother and sister’s names were erased, too. Everyone in Myanmar who is Rohingya has a story of persecution.

For many of us, our memories of being counted are tied to how minorities, such as Rohingya and Kayan people, are persecuted. It’s a tool to systematically de-root us. While I lived in Malaysia, I was always told I wasn’t Malaysian so I wasn’t counted in their census despite seeing them going from house to house to count people. There are some Rohingya here that were born in Malaysia, and they are unfamiliar with what a census is. We will need to explain to them so they are sure to participate [in the 2020 census]. 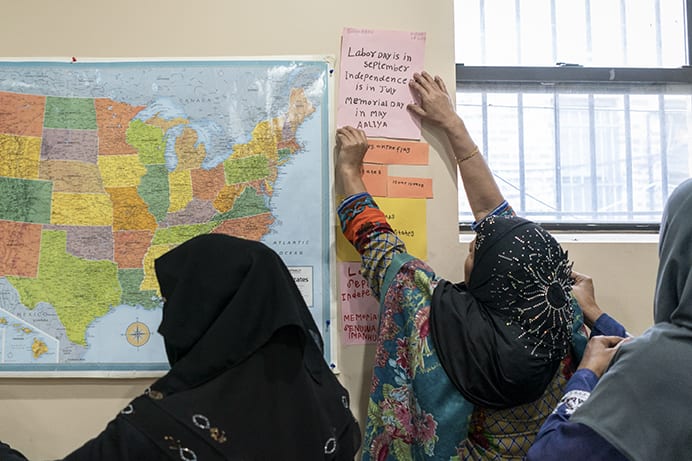 Students post their first written sentences during an ESL class at the Rohingya Cultural Center in West Ridge on August 28, 2019. Photo by Max Herman.

MORE: Read the story of a nine-year-old Rohingya refugee and learn more about the Rohingya Cultural Center

Now I’m a U.S. citizen and this is my country. I am learning how our community can build power and the census is one way. But I know only a few of us fully understand what the 2020 census is and its impact. We need funding and a workshop so we can organize ourselves to make sure we are counted. While gathering everyone in our space would be great, going door-to-door would be even better. If we are counted, it is a footprint that we exist.

Right now, we don’t know exactly how many Rohingya are here in Chicago. We can only guess based on who comes to our center on Devon. One family was resettled and they didn’t know that we have our own community center. So, as our community grows it gets more difficult in a way to make sure we all can come back together.

We like to think of ourselves as a big family here in West Ridge. The center is our village and the voice of the Rohingya in Chicago. It’s not just about donations or service. This space has meaning for us. We will call the community to celebrate, to preserve our language, our food, and our culture. Our identity is very intertwined with our cultural center on Devon.

Before we opened our space, just a few people in Chicago knew who the Rohingya people were, but a physical space allowed us to have a voice in our city. Imagine what a proper census count could do for services, funding, and visibility.  It helps us retain our identity despite the genocide we experienced in Myanmar at the hands of the military.

When you are persecuted, to know the size of your community is not only healing in a sense. Practically, it is a tool to advocate for more services and even language assistance in elections. It’s critical that we get these services going forward.