Finding peace and security after asylum

Therapists and social workers trained in trauma care are helping asylum seekers along their legal and healing journey. 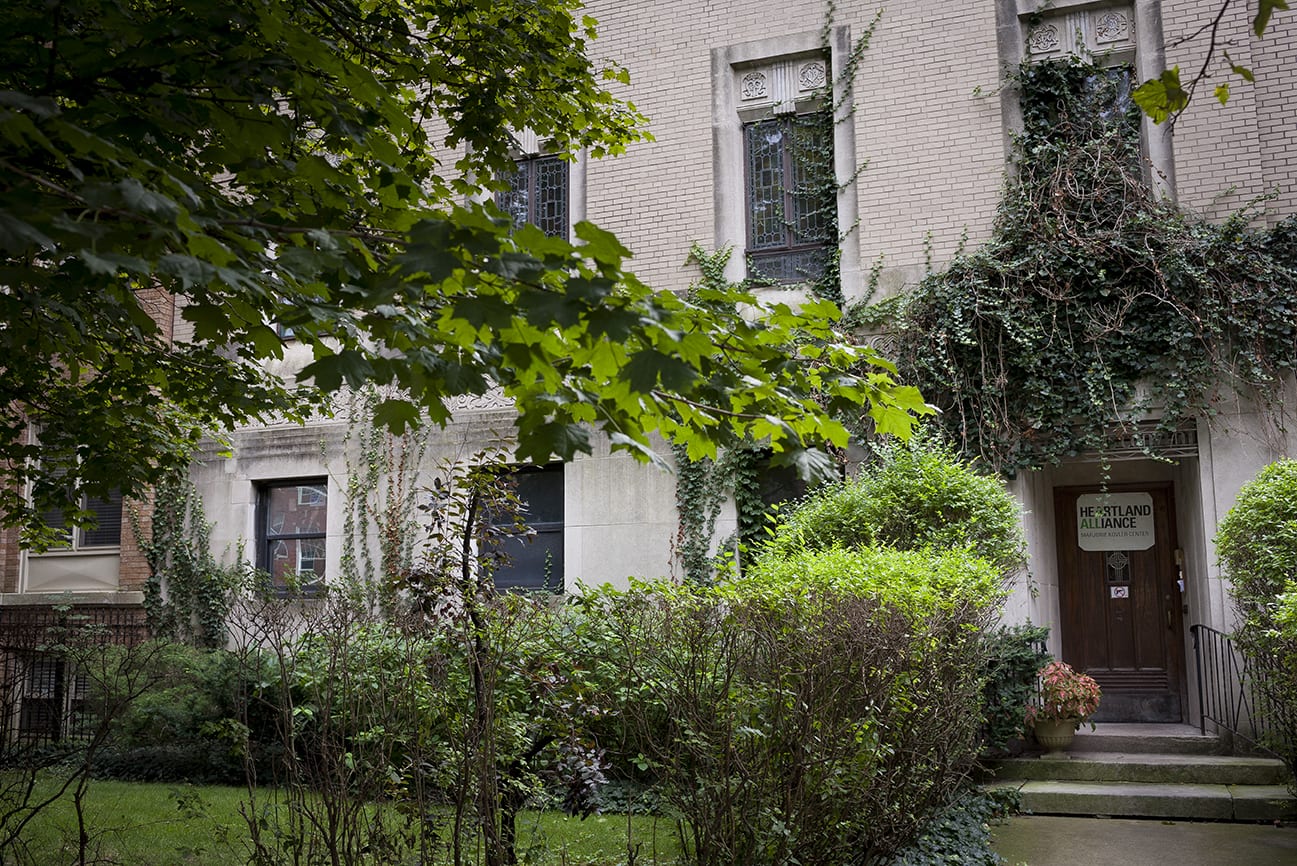 Therapists and social workers trained in trauma care are helping asylum seekers along their legal and healing journey.

Kossi* hadn’t planned to leave his home in West Africa that day. His wife was pregnant with their second son, and he owned a successful shop that sold the colorful swaths of secondhand clothes from Europe and China that were so popular among his country’s youth. But when an anti-government demonstration broke out nearby, and soldiers came into his shop and started arresting his customers, he knew he had to find safety.

Seven years before, he had been taken by the same sort of soldiers and tortured for days, interrogated about his role in a student protest against his country’s dictatorship, and left unconscious in front of a hospital. The soldiers let him live, but left him with a thick, quarter-inch-wide scar that ran six inches down his arm. Next time, they told him, he would not survive.

Kossi ran out the back of his store, scaled a wall, and jumped in a cab that was passing down the street. He told the driver to take him to a neighboring country, a three-hour drive during which his mind flitted from the soldiers to his wife to flashbacks from his time in a military prison.

It was only when he found shelter in a church that the reality sunk in: he could never go back. He was adrift now, and he wouldn’t be safe until he found a new place to call home.

When Kossi arrived in the U.S. in the fall of 2012, just a few weeks later, he had only $50 to his name, money given to him by the priest who had sheltered him when he first fled. Separated from his wife and sons, he was physically and emotionally traumatized. One of his first stops after arriving in Chicago was at a 30-year-old nonprofit located on the far north side.

“It made me feel like I had a home again,” says Kossi.

The Kovler Center brings together lawyers, doctors, and social workers trained in trauma care to help survivors of state-sanctioned torture overcome unimaginable trauma and establish a new life here in the United States. In the last fiscal year, it served more than 400 individuals. Like Kossi, most of its clients are seeking asylum in the United States and coming from sub-Saharan Africa.

Local Chicago immigrant-advocacy and service organizations like Kovler in Rogers Park are vital to providing individuals with legal and social services to help those seeking asylum begin to feel safe again. Kovler offers free forensic exams, psychological evaluations, and counseling, and works with its partner organization, the National Immigrant Justice Center, to get the asylum seeker free legal assistance.

“There is a huge need right now for culturally sensitive, trauma-informed care, and it’s extremely hard to find,” Cartwright says. “That’s why partners like Kovler are so important to accompany the legal services that we provide.”

During the asylum application process, applicants like Kossi are constantly asked to talk and think about their persecution, often by officials like immigration judges and asylum officers who are not trained in detecting trauma. This can be a harrowing process made even more traumatic by the uncertainty of whether they’ll be allowed to stay or be forced to return to the country where that persecution took place.

In 2018, 48 percent of all asylum seekers who went before Chicago’s immigration court were denied relief in their applications, according to data from Syracuse University’s Transactional Records Access Clearinghouse. But nearly all of the torture survivors the Kovler Center helps ultimately receive asylum status, says Marianne Joyce, a licensed clinical social worker who serves as Kovler’s social services manager. 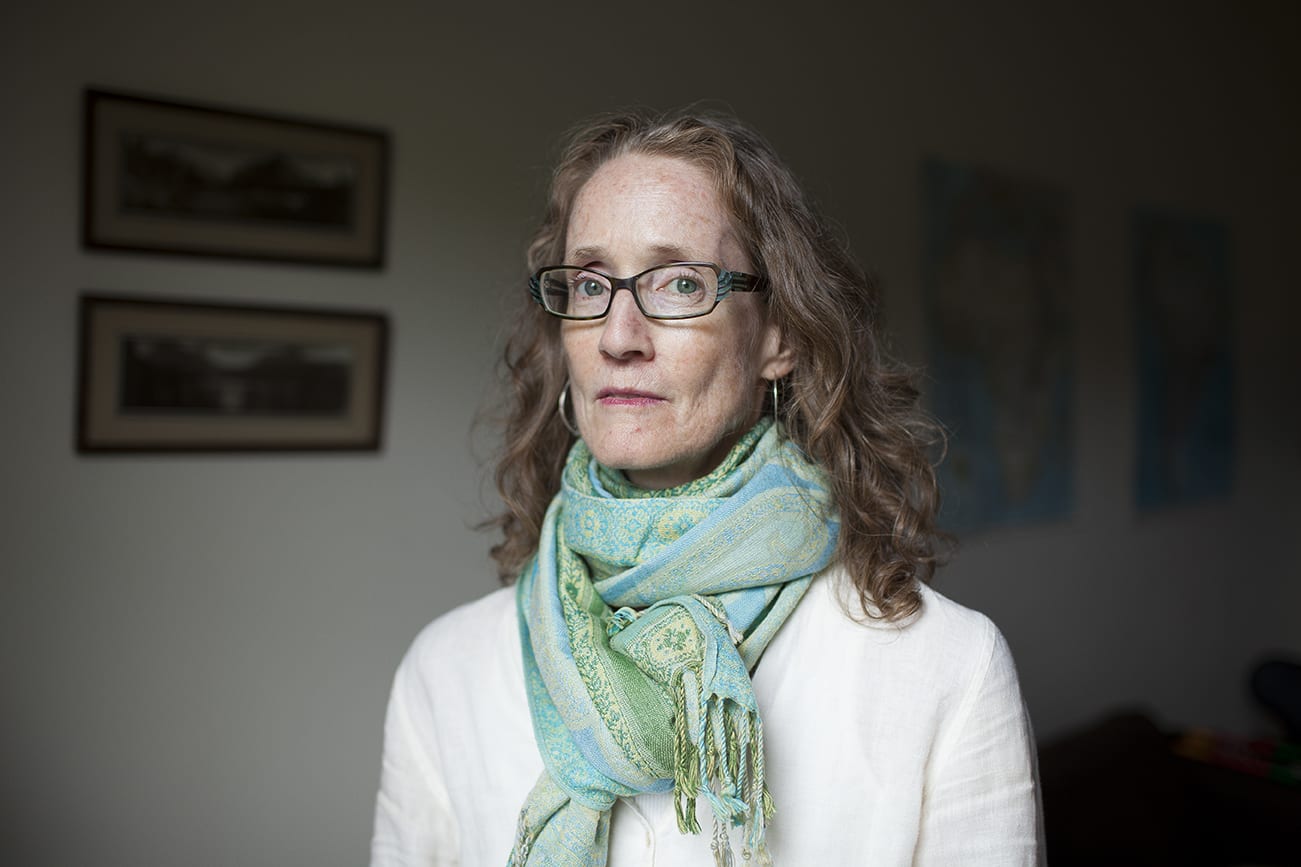 Kovler has a unique holistic approach to care. As survivors go through the asylum application process, they are supported by a “care team” that provides physical and emotional treatment along with legal services.

Unlike in criminal courts, there’s no right to legal counsel in immigration court. Hiring a lawyer to represent you during an asylum case can cost anywhere from $3,000 to $10,000—money that most asylum seekers do not have.

“A lawyer can help an applicant navigate the legal requirements for asylum, which are often daunting and difficult for an individual to handle on their own,” explains Lauren McClure, a Chicago immigration lawyer who represents up to 20 asylum seekers a year at Kriezelman Burton & Associates, a private law firm downtown. “It is challenging to prepare and ask an individual to testify who has suffered substantial trauma.”

To be successful, the application of a tortured asylum seeker requires a wealth of details like injury descriptions, specific anecdotes, and precise time stamps. Recalling such information can retraumatize survivors and make them feel their entire life story is reduced to their torture and the events that led up to it, according to Maggie Hunter, a licensed social worker and counselor at Kovler. So the care team provides asylum seekers with therapy to make that process easier.

“Just learning how to speak openly about what happened was the hardest part,” recalls Kossi. “Now I can do it, but then, it was fresh in my body and soul and spirit. Every time, I felt like I would relive it all over.”

Treating both the legal and psychological needs of asylum seekers also allows survivors to become more than their past.

Hunter and other counselors at Kovler begin sessions by letting the individual take control of the recovery process. She asks them to talk about whatever they’re feeling, even if it has nothing to do with violence and survival. Often, Hunter says, people want to skip talking about torture and focus instead on the obstacles they’ve faced in the asylum process or their frustrations with having to wait for years to be heard in court.

Other times, though, Hunter’s clients want to talk about even simpler things, she says.

“They can share about their diet, their favorite Netflix show, or just something that irritated them with a coworker,” she says. “Imagine if someone made you talk about the worst thing that had happened in your life over and over again.”

“It allows them to feel like their old selves again,” Hunter says.

Kovler staff believe treatment is best delivered in a place where asylum seekers can reconnect with a community through the center’s cadre of volunteers, whether a therapist or a translator. 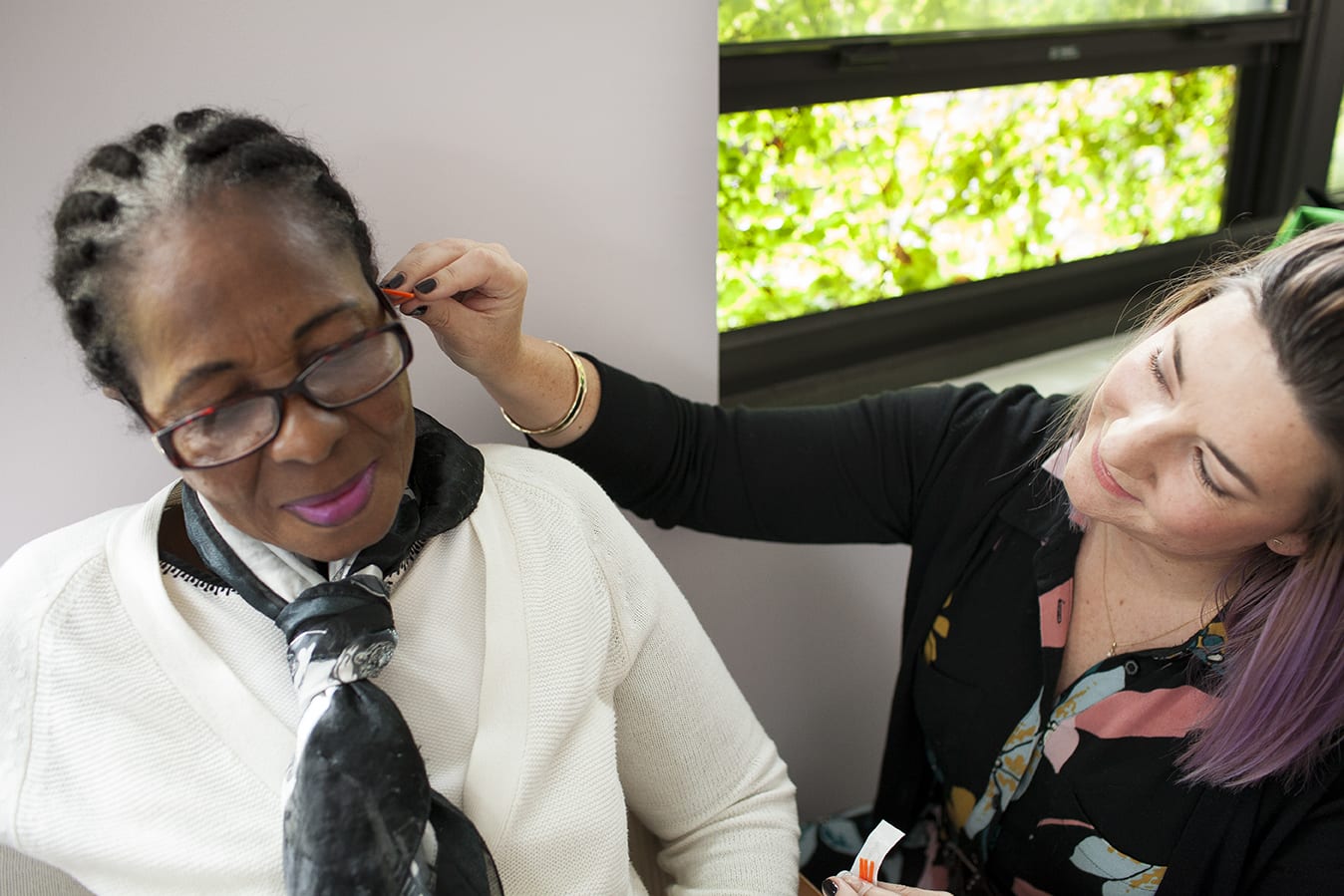 Acupuncturist Hillary E. Catrow holds free walk-in sessions once a week in an open room. “Humans are social beings, and in order for us to feel social, we need to feel safe. The only way we can engage in community is through feeling safe, and that’s done inch by inch, interaction by interaction, and that’s what we do here,” she says.

Catrow adds that it’s important to break down the walls between authority figures and asylum seekers through care.

“There’s a repair and restoration that happens when you start to build trust through dismantling power,” Catrow says. She says that even small things like allowing clients to decide whether they have one needle or ten and where they want to sit or how they want to position their chair in the room can make a big difference.

For Veronique Amouzou, who comes regularly for class with Catrow every Wednesday, acupuncture is a healing tool she’s used for more than 30 years in addition to yoga and tai chi. She says it has given her a sense of calm and relaxation, particularly during the challenges she faced while seeking asylum. Originally from Togo, Amouzou had heard through a friend that Kovler was a place that could be trusted. Almost 15 years later, she still feels safe at the north-side center.

“Inside these walls, you feel special again,” says Amouzou. “The staff is always watching out for you to make sure you are well. If you don’t have food at home, you can come and they will make sure you have groceries. Or if you feel alone, you can find a community here. It’s a place where you feel connected to others.”

It’s a connection that Kossi still seeks years after his asylum case was approved. When he applied for asylum in 2013, his application was greenlighted in less than two months. Today, the uptick in asylum applications has led to a backlog of cases and increased the wait time to years rather than months. As the rate of application denials has increased, the uncertainty of a pending asylum application is even more grave.

When he first came to Chicago, Kossi had a hard time trusting people, including the government officials processing his case. “Every time I meet with friends from West Africa, I can see the fear in their eyes. Imagine fleeing your home and coming here to this situation where you are terrified of losing your case and being deported,” he says.

“The most detrimental aspect of the asylum process to people’s mental health is the interminable wait time,” Hunter says. “How do you convince someone who’s been waiting for an interview or a court date for four years that it’s not personal when all they want is to move on?”

Sitting in the room where he had his first intake interview four years prior, Kossi now looks relaxed in his beret and button-down shirt.

“Kovler Center was the first place in this long journey where I felt safe to speak out and share my story,” he says. “It helped me learn how to tell my story for the asylum process, but also to heal as a person. They know that they’re dealing with someone who is broken and has survived trauma.” In the time since his arrival in Chicago, Kossi has settled into his new home. He now lives with his wife and sons on the city’s north side. He has dreams of becoming a human rights lawyer and helping others like him.

*His name has been changed due to security concerns.

This story was co-published in the Chicago Reader and made possible thanks to support from the International Women’s Media Foundation and the Social Justice News Nexus at Northwestern University’s Medill School.