The burden of proof

How immigration court is especially challenging for LGBTQ asylum seekers 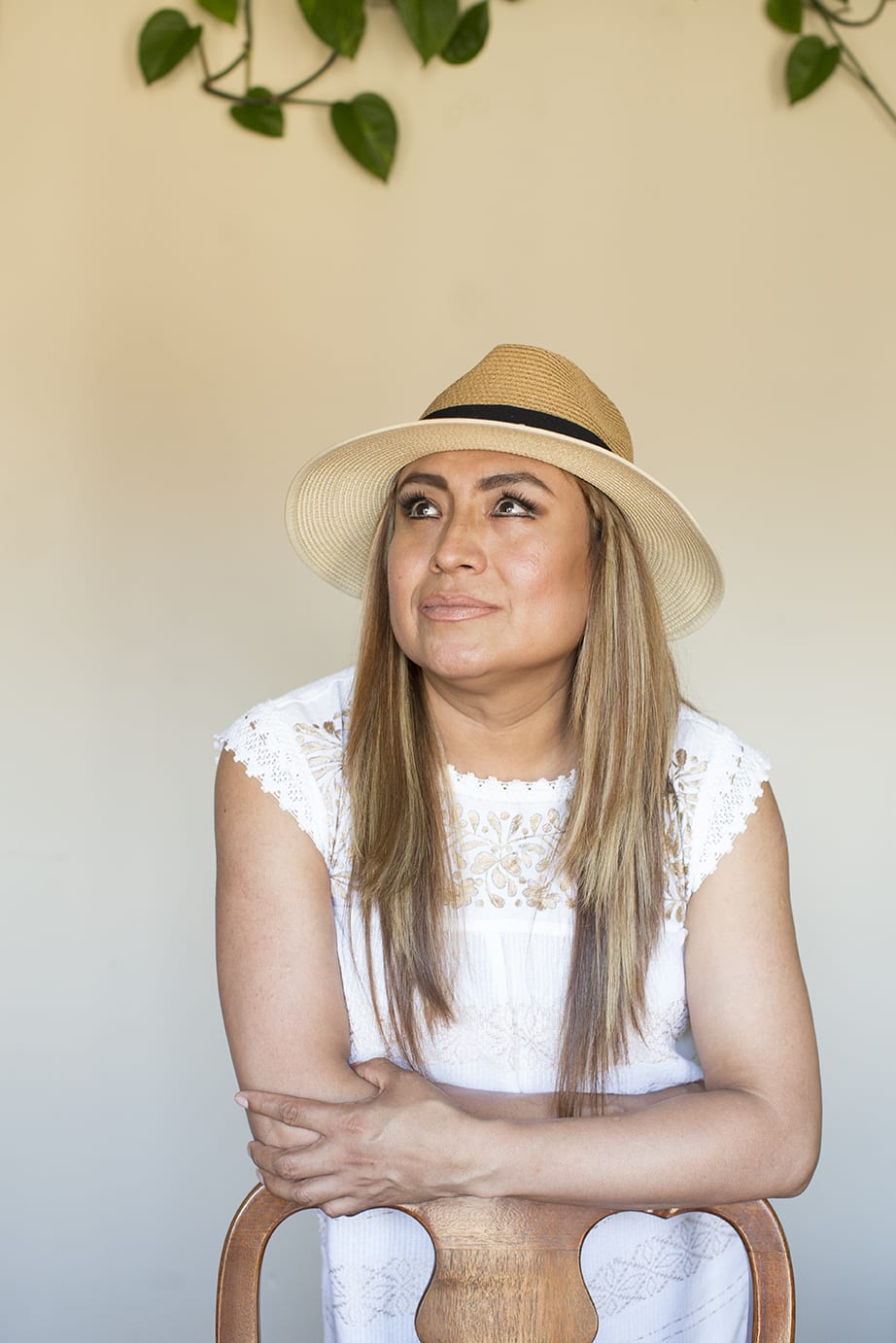 How immigration court is especially challenging for LGBTQ asylum seekers

Two things immediately come to Alejandra Aranda’s mind when asked about her hometown of Iguala, Mexico, in the north-central state of Guerrero. The first is its scenic nature; how El Tehuehue hill serves as a beautiful backdrop to this city, home to more than 100,000 people. The second is the relentless bullying she experienced there, much of it from those closest to her.

Aranda, 48, is a trans woman, and though she transitioned only after leaving Iguala, she says she always “looked like a girl.” Her femininity made her a target for abuse from her peers and family, especially her father, who she says was one of her worst bullies, describing their relationship at the time as “abusive.”

Aranda left Mexico in 1990 shortly after graduating from high school. She used her newfound adulthood and the queerphobia she faced in Iguala to fuel her journey north. She set her sights on Los Angeles after her childhood friend, Tania, who is also a trans woman, sent Aranda letters describing the big American city with its vibrant LGBTQ community.

“I came to America for a new life, for the gay community,” she says. “We all had dreams to come here. For a lot of people, it was for work, but for me, it was to live my life. My gay life.”

Aranda’s journey in the 90s mirrors what many LGBTQ migrants experience today. Queer and trans migrants are still forced to leave home for reasons similar to other migrants, but also because of the violence they face as a result of their queer identities. While exact numbers are unavailable due to fears of persecution at home, an estimated 15,000 to 50,000 undocumented transgender immigrants live in the U.S. according to the National Center for Transgender Equality. Nearly 70 countries around the world still criminalize LGBTQ people, with punishments as severe as the death penalty, according to the Human Rights Campaign.

In search of safety, LGBTQ asylum seekers are often met with more violence at the border at the hands of the U.S. immigration system—a system that can be dangerous for all migrants, but especially for queer and trans people. According to a report by the Center for American Progress, LGBTQ migrants make up just .14 percent of people ICE detained in 2017, yet were 12 percent of those who reported sexual abuse. This sexual violence is often perpetrated by the U.S.-employed detention staff as well as other detained migrants.

In May 2018, 37 Democratic congressional representatives published a letter to Kirstjen Nielsen, then the Department of Homeland Security secretary, criticizing ICE for its “disturbing” treatment of LGBTQ migrants. They denounced the agency for placing trans women in detention with cisgender men and asked ICE to release all LGBTQ migrants from custodial detention into safer alternatives like supervised release or placement with hosts or sponsors while cases work their way through the courts.

For Antonio Gutierrez, 30, the violence queer and trans migrants face from the U.S. immigration apparatus speaks to a dark reality where “asking for asylum could also lead to death.” Gutierrez is a member of Organized Communities Against Deportations (OCAD), a grassroots organization that helps protect and empower undocumented people in Chicago.

Gutierrez says that immigration detention is inherently inhumane and dangerous for LGBTQ migrants, pointing to the tragic death of Roxana Hernández, a trans woman from Honduras who died in ICE custody in May 2018. Hernández died just 16 days after entering the U.S. in search of refuge from the violence she faced back home. While in ICE custody, Hernández was denied medical care, and an independent autopsy revealed that she was physically abused while in detention.

Aranda’s time in immigration detention as a trans woman underscores that idea. Shortly after graduating high school, she tried to get a student visa through the U.S. embassy in Mexico, but was denied when she couldn’t provide all of the necessary paperwork. She and her sister Columba then hired a coyote who helped get them into the U.S. They were detained and deported three times before successfully making it across through Tijuana.

While in detention Aranda was forced to present as masculine and feared discrimination and violence from those around her. Columba knew she was queer and helped protect her on their journey, she says. However, the sisters were separated each time they were detained. Columba would be placed with the women and Aranda with the men. Agents never asked how she identified, and she didn’t think to tell them. Keeping her gender identity a secret became a tool for survival—but it couldn’t fully shield her from the trauma she experienced in detention.

The room in the detention center had a toilet that required the men to use it in front of one another. Aranda felt so vulnerable and uncomfortable in the space she refused to go to the restroom. There were no beds, so everyone had to sleep on the ground. Aranda says the agents treated them like animals, often using excessive force and speaking disrespectfully, with no regard for their humanity.

“It was something very traumatic for me,” she says about the three nights she spent in detention. “It’s something that I will never forget.”

The oppression and discrimination migrants face navigating the U.S. immigration system don’t just occur in detention. Bindhu Vijayan has been an immigration lawyer for over ten years. She is currently the director of immigrant empowerment and activism at Community Activism Law Alliance (CALA), a Chicago-based organization that offers legal services to marginalized communities. Vijayan says there are a plethora of ways the immigration court system is challenging for LGBTQ asylum seekers.

In the U.S., a person can seek asylum in several ways. One of the more common is through a port of entry. This is where an immigrant presents themselves at an official station, then undergoes an interview meant to establish whether they have “credible fear” of harm in their home countries. After that they are usually released and allowed to live in the U.S. until their time in front of an immigration judge—though this process has been recently upended by the Trump administration’s “Remain in Mexico” policy.

To be granted asylum, someone must prove that they are fleeing persecution in their home country and that this persecution is based on race, religion, nationality, political opinion, or membership in what is called a “particular social group.” LGBTQ people have been considered members of the “particular social group” category since 1994. So in order for LGBTQ migrants to be granted asylum, they must prove to an immigration judge that they are queer and/or trans.

Vijayan sees this material proof to be the most significant hurdle queer and trans migrants face while navigating the immigration court system because the burden of proof is so high. “What is this proof?” she asks. “You’re coming from a country where you maybe never disclosed to anyone [that you identify as LGBTQ] or you didn’t belong to any particular organization.”

Vijayan also sees the methods many courts use to determine if a person is LGBTQ or not as highly problematic because they often rely on stereotypes and cultural biases. She says migrants are forced to reveal private and intimate details about their lives to meet the burden of proof—from the moment they first realized they were queer and/or trans to how many partners they’ve had.

An individual judge’s cultural biases have a considerable impact on whether or not an LGBTQ migrant will be granted asylum. If a migrant does not “fit the bill” for what a specific adjudicator believes a queer or trans person looks like, Vijayan says, they will likely be denied asylum and deported back to the violence they’ve fled. Vijayan also notes that many LGBTQ migrants may not even reveal their queerness to a judge due to fear of continued discrimination.

“Depending on your country of origin, you may have corrupt judges, corrupt police, [and] just general violence, discrimination, and harassment,” she says. “You may not necessarily want to speak to this intimidating, uniformed customs and border patrol agent and disclose ‘by the way, this is what my identity is.'”

For Aranda, the intimidation and fear she felt in the presence of Border Patrol is something that has stayed with her nearly three decades later. “You saw their power,” she says. “It’s like a movie, to tell you the truth.”

Aranda now lives on Chicago’s north side, and CALA is helping her apply for asylum—something she didn’t know she qualified for until recently. Like many asylum seekers before her, she will also have to meet a high burden of proof in order to be granted refuge in immigration court.

She speaks fondly of the freedom she says she gained in Los Angeles, allowing her to be herself. Navigating the U.S. as a trans woman of color and an immigrant has led to its own specific set of challenges, though—most recently, getting her name changed in her job’s computer system. The cash register at work used to print receipts with the name she was given at birth, which had placed her in many awkward and sometimes unsafe situations. Now, she feels safer because it prints her last name instead.

Even with all of these challenges, Aranda’s focus isn’t on what she’s lost or the pain she’s experienced. It’s on the life she’s been able to build for herself. A queer life.

“With all the discrimination and everything I’ve lived through,” she says, “I’m a super person now.”

This story was co-published in the Chicago Reader.