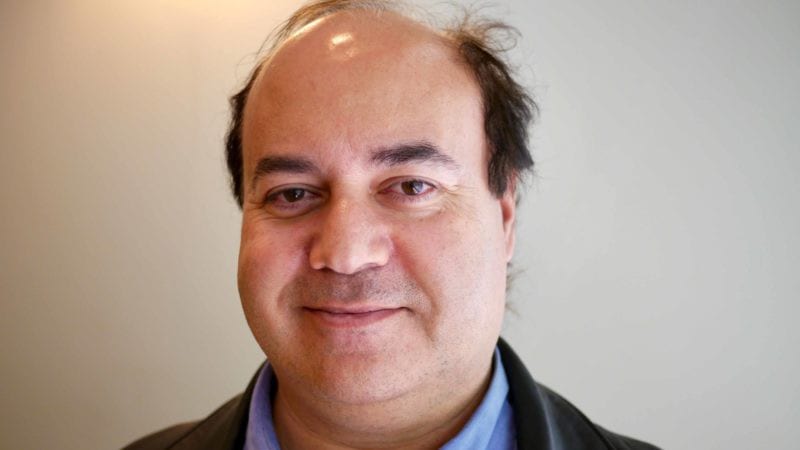 For years, few Americans knew Osama Alomar as a writer. Driving a cab for thirteen hours a day, seven days a week through Chicago’s crowded grid, the novelist and Syrian exile gave his rider few hints of his notoriety, save for a notebook in which he would scrawl stories in between fares.

In Damascus, where he was born, Alomar had enjoyed a thriving career as a writer, penning essays and stories for magazines inside and outside of Syria. His father, a philosophy professor, and his mother, an elementary school teacher, encouraged his interest in reading and writing from a young age. He had a strong cohort of writer friends and published four prize-winning collections of Arabic poetry and short stories. Influenced by the work of Kahlil Gibran, Franz Kafka, and Hans Christian Andersen, Alomar grounds his satirical stories in metaphors that cloak his dissident views against the Syrian government. Most of them are, as he describes, “short, short stories.” “We Won’t Surrender,” for instance, is but a few lines long:

The current of the river spoke to the salmon who wouldn’t stop going against him, saying, “Your stubbornness won’t help you!” But the fish answered him in one voices, “We won’t surrender!”

Despite his success in Syria, Alomar felt restricted by his country’s political climate. The war was still three years off, but he could feel a crackdown approaching. In 2008, he packed his bags and came to the United States, dreaming of writing without censorship.

This January, Alomar finally found the freedom he was seeking. After nearly eight years of driving a cab to make ends meet, he returned to life as a full-time writer and accepted a residency at the City of Asylum in Pittsburgh. In 2014, New Directions published his English-language poetry collection debut, Fullblood Arabian, a compendium of allegories aimed at Syrian President Assad’s regime. Last month, Alomar released The Teeth of the Comb and Other Stories, also with New Directions, which explores themes of human dignity and tyranny through over one hundred and fifty compact stories — some only a sentence or two long — laced in wry metaphor. Many deal with the war in Syria, which Alomar has watched with horror from the United States.

His next project, an as yet unnamed novel, will focus on the conflict more directly. As a writer, he says, his job is to raise awareness about Syria’s violence against civilians with the strongest tool he has: his pen. The lives of his writer friends who have been disappeared, and his relatives still trapped in Damascus, are never far from his mind.

I sat down with Alomar before his reading at the Evanston Literary Festival recently to talk about the war in Syria, his time in exile, and the power of the pen.

Borderless: What led you to move to the United States? Did you anticipate the move being permanent?

The regime in Syria was very brutal, and as a writer, I had limits. That’s why I published my books in Lebanon. There is no censorship in Lebanon. So in coming to the United States, I was looking for new horizons. As a writer and artist, I cannot do anything without freedom. For me, freedom is just like the air or water. I cannot write without freedom.

When I moved to the US in October 2008, I was thinking that I’d go back and forth to Syria every two or three years. That’s why I left most of my stuff there in my apartment in the suburbs of Damascus. I left an unpublished novel and some other short stories and poems that were all ready to publish, and it breaks my heart because I spent years and years working on them, but nobody imagined what would happen one day. My apartment was completely destroyed by a bomb in 2013. I lost everything there. My friends called and told me the news, and I cried. I cried not only for losing my apartment and my belongings, I cried for our whole people. I feel really sorry for the people in Syria. My apartment or my property is a very, very small part of this big disaster. Syria looks like hell today. It’s completely hell and chaos.

Borderless: Did your writing change after your apartment was bombed?

Osama Alomar: My writing became gloomier. Now I’m writing a novel about the Syrian war. It will be completely different from my short stories. I used to use metaphors in my stories and in my poems. Now in the novel, I’m going directly to the point. It’s a completely realistic story.

I have to address my feelings directly because I cannot avoid the war. It’s something in my soul, in my blood. To see your country being destroyed from afar — it’s very hard to only watch and do nothing. My writing is the only way to address my feelings about this disaster and to at least try to find a solution as a writer. I know I have limits. But I have to do my best as a writer.

Borderless: What is your writing process like? Has it changed much over the years?

Osama Alomar: I write in Arabic and prefer writing my stories by hand. I have a used computer, but I’m still attached to handwriting. And I need a cup of tea or coffee when I write. When I was in Syria, I was addicted to tea, but now I’m addicted to Starbucks.

Mostly I write in the nighttime, not the daytime. I used to work during the day, so I couldn’t write then. But I prefer nighttime because it’s quiet, and I feel more inspired then.

During the day, I read, hang out, and check my emails. I don’t have a specific writing schedule. Sometimes I’ll write three or four hours a day, sometimes for only one hour. It depends on the idea I’m working on in my mind.

Borderless: You published Fullblood Arabian, your first book in English, while you were still driving a cab. What was it like working on that book under such time constraints?

Osama Alomar: I worked on many, many poems with my translator, C. J. Collins, while sitting in the front seat of my cab. Most of the poems had been published in Arabic in the Middle East before, but had not been translated into English. So C. J. would come to Chicago for a few days and we would work on the translation during my thirteen-hour shift. They were long days.

Borderless: You’ve said in previous interviews that you used metaphors in your work partly for protection, as it would have been dangerous to write about subjects like dictatorship and human-rights abuses in a more open manner. What was your experience of being a writer in Syria? What happened to your writer friends who stayed in the country?

Borderless: I was afraid that something would happen to me. But at the same time I was lucky, because some writers were tortured and jailed. I was lucky and I was not very daring. I always used metaphors. Some other writers went directly to the point and were very daring, and they paid a high price for that. I always used metaphors that could be interpreted in more than one way. Maybe this style protected me.

Some of my good friends who were writers disappeared. Others are still inside Syria and there are others who are refugees. I’m worried about those who disappeared. I don’t know anything about them now. They just disappeared like that after the war started, while I was living in the United States. I hear about what is going on back home through Facebook or through a rare phone call. But it’s very difficult for them to communicate, because often there is no power there, and there’s no electricity.

I’m homesick. But I cannot go back to Syria. I lost everything. And I’m against the Syrian regime, so there is no way to go back. I’m really homesick.

Borderless: How do you think Americans view the Syrian conflict?

Osama Alomar: There’s a lot of sympathy, but some people don’t care. They think Syria is a very faraway place and that it’s none of their business. But most people have warm feelings toward Syrians and the Syrian conflict. They want to do something, but they have limits.

Before Trump, I was not worried. To be honest with you, when I came to the United States, I felt freedom right away. But after Trump, I became worried not only for immigrants, not only for Muslims, not only for the US. Now I’m worried for the whole world.

It seems like there is a great wave of hatred now. I don’t know how this happened. But as a writer, my weapon is my pen. I want to create more awareness about the people in Syria. This is the most important issue: protecting civilians in this crazy war.

Some people think that the Syrian people are from another planet. On the contrary, I think that we all live inside the same boat, on the same planet. And the Syrian war affects everybody now, the whole world. There are Syrian refugees everywhere now. (Maybe even in outer space.) But it looks like nobody cares about civilians in Syria. They are suffering. There are hundreds of victims—innocent women, children, and old men who are hurt or killed every day—and no one cares about them.

Borderless: You’ve seen your country suffer a great deal and have every reason to be pessimistic about the world. But throughout your stories, you seem to have a theme of not giving up.

Osama Alomar: Yes. Life is not easy. Life is very harsh. We have to be strong. Otherwise, life will destroy us.

I have written some stories about weakness. I believe that punishment for a weak man is doubled. So when I feel upset, I always try to fool myself and say to myself, I have to be patient because I have a goal to reach. Especially when I was driving my cab, I would say this. When you have a goal to reach, you will be strong automatically. And you will be patient automatically.

At the beginning of the Syrian conflict, I was optimistic. But now, I’m pessimistic, because it’s so complicated. It’s much worse than before. The whole world is fighting inside of Syria. It will take years and years to resolve.