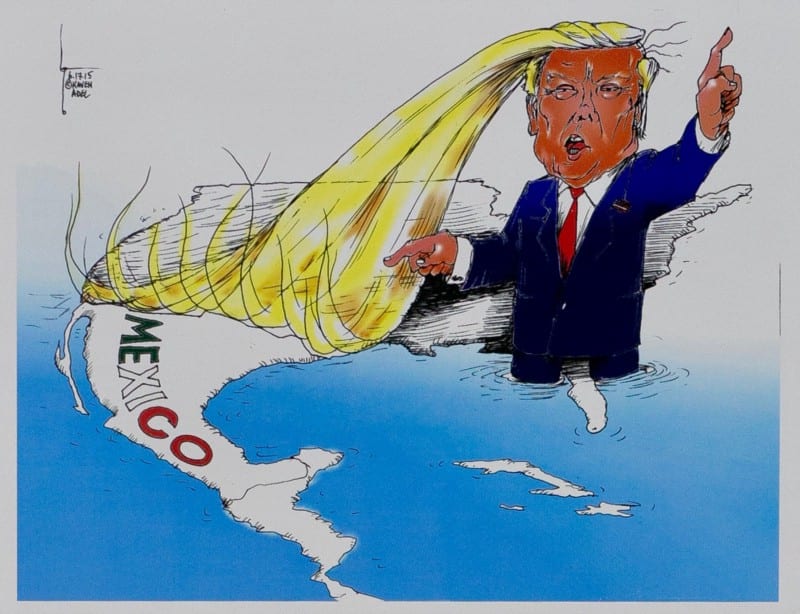 Nearly 40 political cartoonists from Mexico and the United States expressed their views on President Trump’s immigration policy for a new exhibition that opened this week in Chicago. Playfully named after a rebel group that was active in Argentina in the 1960’s, Montooneros brings together artists from “every single corner of this country and every single corner of Mexico,” according to Omar Magana, the founder of Little Village’s OPEN Center for the Arts, which is hosting the exhibit through April 8.

Magana says that the comic medium was chosen for this exhibit because political cartoons have historically played an important role in spreading ideas, especially among populations with high levels of illiteracy. Borderless spoke with some of the people who attended the March 11 opening of the binational exhibition.

“Since Trump won the presidency some people have finally woken up to some of the things that were already happening here,” says artist Eric J. Garcia. “Racism has been there from the beginning of the United States. It was always there, but it became hidden for a while. It went underground. But now it’s been unmasked again, and it’s in our faces. Obama was nicknamed “The-Deporter-in-Chief.” As a president he deported so many immigrants. But now, it’s just more blatant and in your face that Trump wants to deport you.”

“Art can be used to hold those in power in check and is the fire that burns humanity in the right direction,” says Chicago artist Kaveh Adel. “Artists have the ability to really give a lot of information in one frame. This really helps educate an audience, hopefully, who may not have exposure to what a refugee is. Or to what an undocumented immigrant is. I immigrated to the United States from Iran when I was 13 years old. I was fleeing political persecution. When I came to America, I wanted to tell my story, but it was difficult to tell it in a verbal manner. But pictures have universal symbols. You can draw a heart and it can mean the same thing to someone from Mexico, Iran, or Canada. Everybody gets it. These political cartoons are a wonderful opportunity for artists to educate people using these powerful symbols.”

“It feels like reason has sort of flown the coop,” says artist Eric Semelroth. “The people on the right talk about generalities and making America great again. But what does that even mean? Maybe people who support Trump’s immigration policies haven’t seen the economic impact of immigrants in this country, the good they do and the businesses they start. Maybe once they see the good in that they might soften their immigration positions, but I can’t think the way they do. I just have to keep on doing what I do with my art to foster a discussion. I don’t know if it’s going to persuade anybody, but I’ve got to say what I’ve got to say.”

“I think its immigrants who built this country,” says Georgina Vazquez, who attended the exhibition. “It’s never been solely white America. All these different cultures came in, all these different races. We’re a melting pot. America was built off of immigrants. For Trump to say, ‘Okay now we don’t need you anymore,’ after profiting off their labor in the farm and service industries, then be prepared to pay for higher costs in all these businesses that rely on immigrants. You can’t just pull the plug on immigrants and expect everything to be the same.”

“It’s very difficult to find an outlet to speak about these type of political topics because usually, right away you say something that the other person really doesn’t care to hear,” says artist Jose Raya. “With political cartoons you see the art first. And then, as you see these images it makes you think. The art isn’t talking to you with words. It’s just showing you an image. And you’re going to use your own brain to connect to it. So I believe this kind of political art is necessary, especially in a time when Trump’s ‘Make America Great Again’ has split the country in half.”

“Everything is negative right now,” says Cynthia Vaca, who attended the exhibit. “There are families that fear they will be deported. I think people who support Trump’s policies should see the other side of how hard it is to drop everything you had in Mexico to pursue a better life here. People leave for many reasons. Because they want a better life for their kids, they’re fleeing domestic abuse, or they’re refugees seeking asylum. I think they should open themselves up to look at all the reasons people come to this country, not just focus on immigrants coming here because they wanted to get a job.”

“When I was a kid in El Paso, Texas my father — without any sort of malice and more out of ignorance — used the term ‘wetback,’” says artist Mark Ranslem. “When I was I kid, I didn’t understand what the word meant and later my mother told me not to use that term. Later, I learned the term to use was ‘illegal alien.’ And now it’s the more neutral term ‘undocumented immigrant,’ because people are not illegal. I’ve known a number of people who are undocumented and it’s not an issue for me. It was part of what it was like growing up in El Paso. People would come across the border; it was so fluid with people coming back and forth for work. There were people I knew who needed to make money working at a nursing facility during the day and then would go back home to Juarez, Mexico at night.”

Montooneros will run at OPEN Center for the Arts at 2214 S. Sacramento Ave., Chicago through April 8. After that, the exhibit will travel to Mexico.